Costa Rica’s forests are an incredible success story. Following decades of rampant tree clearing for agriculture and livestock production, Costa Rica implemented protective policies in the 1980s that allowed forests to make a remarkable comeback. Today, Costa Rica is the first tropical country to have stopped and reversed deforestation: over half of its land is covered by forest, compared to just 26 percent in 1983. At the same time, Costa Rica has seen significant growth in sectors like sustainable tourism and hydropower generation.

But the larger story of Costa Rica’s sustainable development doesn’t end there. Urbanization and greater energy needs are putting pressure on Costa Rica’s natural resources, while growing international demand for timber--particularly rare hardwoods--is incentivizing illegal logging. Local timber production, private investments and jobs in the forest sector, and wood craftsmanship have declined significantly. Public budgets for enforcing forest protection policies are being stretched. Due to the limited use of local timber in the construction sector, new houses are often built using cement and metal, which are associated with a high carbon footprint.

Ultimately, forest conservation in Costa Rica will be undermined unless the forestry sector is reformed to address these challenges. Maintaining Costa Rica’s significant forest growth will only be possible if forests are considered a productive asset, and their contributions to the economy accurately reflected in policy.

This is where Natural Capital Accounting (NCA) is crucial in informing policymakers about how forests contribute to the economy beyond what is reflected in GDP.

Since 2012, Costa Rica has worked with the World Bank global partnership on Wealth Accounting and the Valuation of Ecosystem Services (WAVES) to get a more accurate representation of the country’s natural resources – forests, water, and energy – and how they interact with the economy. NCA provides policymakers with better information about the alternative uses of land, the economic implications of investments that degrade natural resources, and how to weigh the potential trade-offs.

With support from WAVES, the Central Bank of Costa Rica (BCCR) and the Ministry of the Environment and Energy (MINAE) released Costa Rica’s first forest accounts yesterday. The forest accounts provide data like how much and what types of forest are found in Costa Rica, how much forests and forest products are worth, and how these numbers have changed over time. The results have critical implications for how Costa Rica manages its forest resources, both for conservation and sustainable use.

A major finding from the forest accounts is that forests contribute more to Costa Rica’s Gross Domestic Product (GDP) than previously thought: around 2 percent, including returns from timber, other forest products, and economic activities that make use of forest products. This is in sharp contrast to industry figures from national accounts that only consider timber extraction, which alone added just 0.2 percent to GDP in 2011, and just half of that amount in 2013. Since Costa Rica’s forests are more valuable than expected, it will be crucial for forestry policies to be adjusted to effectively protect and build these resources.

Forests' Contribution to the Economy of Costa Rica (Percentage of GDP) 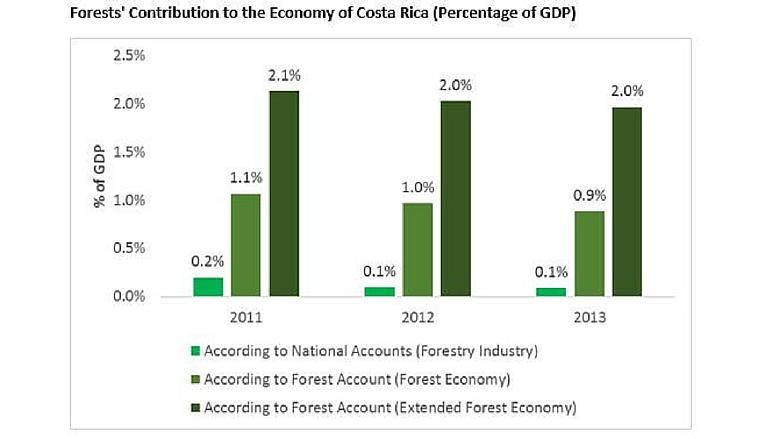 " Natural Capital Accounting is particularly relevant for our country, since we depend on natural resources to grow and create new development opportunities. The compilation of environmental accounts by the Central Bank is an important step in the right direction. We need to better understand the interaction between the economy and the environment, and its implication for fiscal and economic policy in general, "

Minister of Finance and first Vice President of Costa Rica. 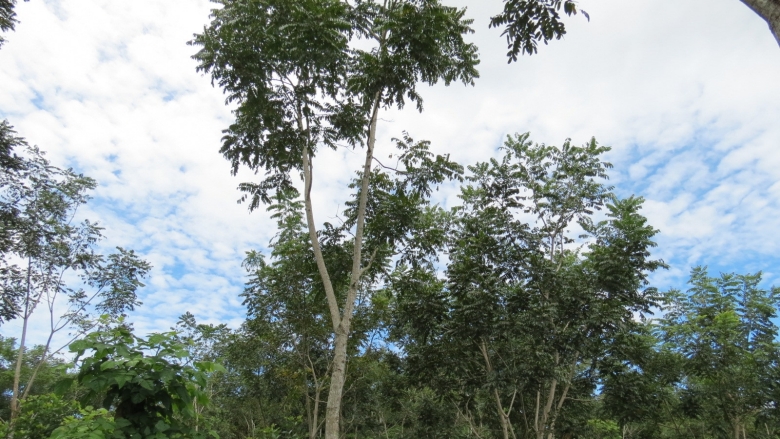 The forest accounts also confirmed that Costa Rica continues to gain forest cover, reaching 52.4 percent in 2013, in line with National Forests Inventory data. Plentiful natural forests are now growing on lands that used to be dedicated to crops and pastures. Moreover, this new forest growth accounts for an additional three percent in the amount of carbon stored by forests countrywide, which is increasingly important for addressing climate change such as through the government’s strategy for REDD+ program (Reduced Emissions from Deforestation and Forest Degradation). Securing the integrity of Costa Rica’s protected areas and strengthening its Payment for Environmental Services program remain key priorities for maintaining this natural wealth.

As the forest accounts report notes, “Viewing forests as a resource allows an appreciation of their value beyond simply being an input for the timber industry”.  Providing a value for these resources enables forests to be easily understood as one of many components of a complex economy.

To gain an even deeper understanding of forests’ “hidden” contributions, Costa Rica is currently working on accounts for ecosystem services, to truly capture the value of benefits like water filtration and biodiversity protection. Decision makers will then need to use all of this information in designing policies that put Costa Rica’s forests and its people on a long-term path to sustainable development.