Rising up from the Ashes, Gujarat ramps up Disaster Preparedness 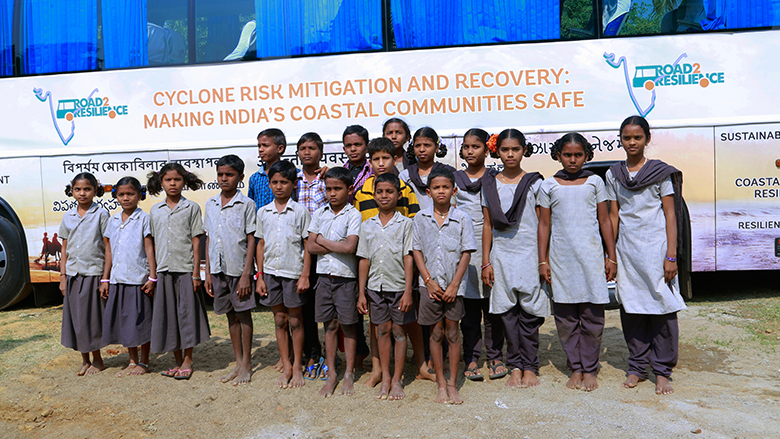 The last stop of the 35-day Road to Resilience journey was in Bhuj, Gujarat, where 15 years ago a devastating earthquake had flattened the city

On the bright winter morning of 26th January, 2001, as India celebrated Republic Day, a massive earthquake measuring 6.7 on the Richter Scale shook the Kutch region of eastern Gujarat.  The shock waves spread across the state, causing massive devastation as far away Ahmedabad, some 250 kms from the epicentre.

The two minutes of upheaval led to a colossal loss of life and property. Nearly 14,000 lives were lost, some 160,000 people were injured, and over a million homes were damaged or destroyed. The ancient city of Bhuj was flattened, its hospital reduced to rubble, and nearby towns and villages devastated.

For those who survived, the event was seared indelibly in memory. “It was a moment of life and death,” recalled Anup Karanth, an engineering student in Ahmedabad at that time. “Our building shook violently and I couldn’t rush out,” he recounted, remembering the fear that gripped him as he lay trapped on the fourth floor. “I didn’t know whether to run to the terrace or to the ground so I made my way to the first floor and jumped, hoping I wouldn’t be hit by a collapsing building.”

While Karanth escaped with cuts and bruises, many of his friends were not so lucky. “That moment changed my life,” Karanth recalled. He went on to specialize in disaster management and is now a part of the World Bank’s disaster risk management team.

The event shook the state administration too. “Luckily schools were closed, otherwise a whole generation of children would have been wiped out,” recalled Shyamal Sarkar who oversaw the World Bank’s support for reconstruction to the state.

Not surprisingly, even while the massive reconstruction effort was underway, Gujarat became one of the first states in the country – along with cyclone-prone Odisha – to work proactively towards disaster management. The impact of their work is now evident on the ground. Fifteen years later, mock drills are part of the regular regimen to promote earthquake safety in all schools across Gujarat, including in rural schools.

A long bell sounds in a small rural school in Bhimasar village in Kutch district. The constant ringing denotes an emergency. A teacher’s voice booms across the loudspeaker and children rush out of classrooms, thick books covering their heads. An earthquake and fire drill is underway.

Thirteen year old Vijay Manubhai Maharaj, a student of Class 8, is part of the search and rescue team in Bhimasar Primary School. He enjoys these drills that take place five to six times a year. “When the bell rings we rush to the assembly point and, once the rescue teams arrive, we guide them to where our classmates may be trapped,” he said.

“Thanks to these drills, the people of the village too know what to do in an emergency,” added Harsukh M. Pampania, the Class 5 teacher in Bhimasar. 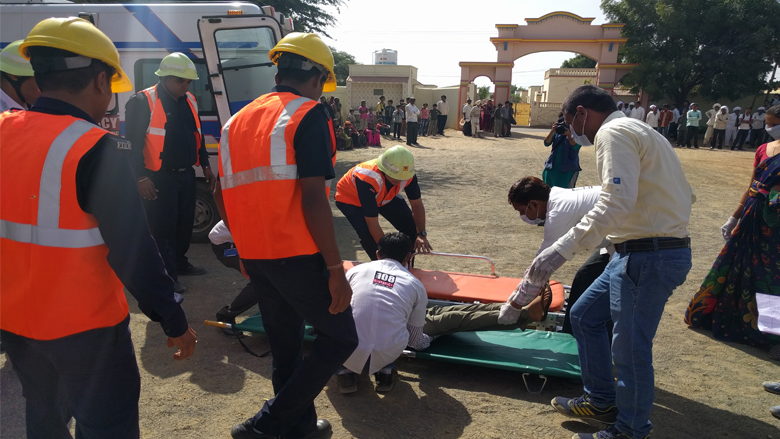 The state's fire services, which are tasked with emergency search and rescue operations have also been revamped

World Bank
" Thanks to these drills, the people of the village too know what to do in an emergency " 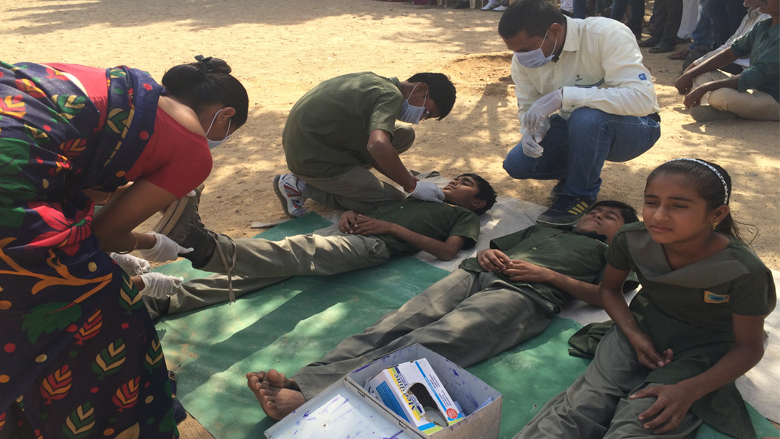 Since 2001, the state government has worked assiduously to make Gujarat one of the lowest-risk investment destinations in the country in terms of disaster. With support from the World Bank’s Gujarat Emergency Earthquake Reconstruction Project (GEERP), the state established three nodal institutions dedicated solely to disaster preparedness and management: the Gujarat State Disaster Management Authority (GSDMA), the Institute of Seismological Research (ISR), and the Gujarat Institute of Disaster Management (GIDM).

Given the large-scale development planned across the state, the GSDMA developed a detailed hazard map to assesses the vulnerability levels of all its 25 districts and 226 talukas. The Hazard Risk and Vulnerability Atlas - the first of its kind in the country - assesses vulnerability to six different kinds of disasters: earthquakes, tsunamis, floods, cyclones, and droughts and, to chemical and industrial hazards as well.

Based on this atlas, the GSDMA has advised Gujarat’s major cities to change their land-use planning and building bye-laws to ensure that all new construction is safe. Government departments have also been instructed to retrofit public buildings to appropriate standards.

“While we may not be able to prevent a disaster, we can certainly reduce the loss of life and property by building houses and infrastructure to disaster-resilient standards, preparing communities, and equipping ourselves to respond swiftly should a disaster occur,” said Anju Sharma, CEO of GSDMA.

Identifying earthquake risk is of particular relevance in Gujarat, where the Kutch region falls within the highest seismic category - Seismic Zone V – and experiences some 200-300 tremors a month.

The Institute of Seismological Research (ISR) now measures tremors round the clock through a dense network of over 60 seismic stations, 50 of which are located in the Kutch region alone. “Earlier, it took about three hours to learn of an earthquake,” said Sumer Chopra, ISR director.  “Now we get to know within 2-3 minutes and are able to inform the NDMA within 10 minutes.”

In addition, the institute carries out micro-zonation studies to help determine which parts of densely populated towns and cities are safe for high-rise buildings – where one can build only one or two stories, and where it is safe to go higher. Studies have been conducted for Ahmedabad and Gandhinagar, as well as for the port-cum-industrial complex at Gandhidham - Kandla, and the Dholera Special Investment Region. Work is currently underway for Surat and Bharuch, and is proposed to be done for Jamnagar, one of the state’s most industrialized towns.

In recognition of its expertize, the Government of India has requested ISR to identify the seismic risks in 30 major Indian cities that have a population of over one million and fall within a high- risk seismic zone.

“We know what to do to ensure an earthquake-safe country,” sums up Dr. M. Ravi Kumar, Director General and distinguished scientist at ISR, “Now it is important to make it happen. This will require a marriage between the scientists who determine the degree of earthquake risk a particular area faces, the engineers who construct buildings in that area, and the policy makers whose role it is to enforce the building codes. All three must play their part.”

Should a disaster occur, the district administration, whose duty it is to provide the first response, needs to be trained to respond without delay. Today, the Gujarat Institute of Disaster Management (GIDM) trains government officials - at both the state and district level - in disaster preparedness and mitigation. The institute, the first of its kind in India, has also trained officials from other states as well as from a number of SAARC nations.

In addition to the three nodal institutions, the World Bank project also helped Gujarat set up Regional Emergency Response Centers (ERC) in Ahmedabad, Gandhidham, Rajkot, Surat, and Vadodara, enabling them to fan out to disaster-struck populations in their hinterland without delay.

The project has also revamped the state’s fire services who, like their counterparts across the world, are tasked with emergency search and rescue operations. “Before the earthquake, we did not have modern equipment,” said M.N. Dastoor, Chief Fire Officer in Ahmedabad. Dastoor is one of three generations in a family that have devoted their lives to helping people in emergencies; his father was one of the earliest fire-fighters in the country, with a career that began in 1958, and his son is now training for the same profession.

Dastoor recounts the progress the Ahmedabad Municipal Corporation Fire & Emergency services have made since the day of that fateful quake: “We now have mini fire tenders that can navigate the narrow lanes of the old city, special breathing apparatus to go into smoke and gas filled rooms, thermal imaging devices and remote sensing equipment to search for survivors, airboats that can operate in flooded areas, and are able tackle chemical, electrical and hydrocarbon fires. We have also helped other states in times of disaster – after Kosi floods in Bihar in 2008, floods in Rajasthan twice, and the Karnataka floods of 2009.”

But while Dastoor is proud of his team’s dedication, skill and expertize, he emphasizes the need to upgrade the equipment that was provided to them over a decade ago. “It is when go out to save others in an emergency, often risking your life to do so, that you wish the equipment you have to depend upon was newer and more reliable. We also need state of art training centres with training modules,” he said.

Gujarat has indeed taken pioneering steps to keep its people and assets safe in the event of a disaster. But, given rapid urbanization and the advent of new industries, constant vigil and regular upgradation of equipment and skills will be needed to mount a successful response should another mammoth quake shake the region or any other kind of disaster occur.

Much the same now needs to be done in other vulnerable parts of the country. “Like Gujarat, India’s northern and northeastern regions are extremely vulnerable to earthquakes. States in these regions can also undertake similar initiatives to protect their people and equip themselves to respond effectively in case an earthquake does occur,” said Saurabh Dani, senior disaster risk management specialist at the World Bank.