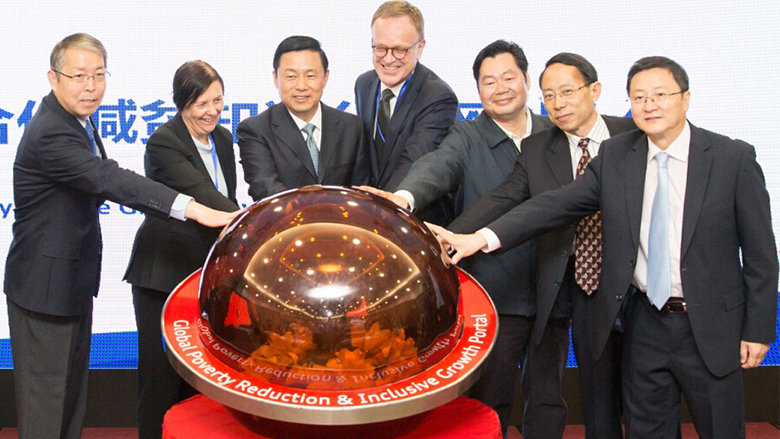 Bert Hofman (center), the World Bank's country director for China, Mongolia and Korea, delivered a keynote speech at the launch ceremony of the Global Poverty Reduction & Inclusive Growth Portal in Beijing on May 8, 2016.

The Global Poverty Reduction & Inclusive Growth (GPIG) Portal was officially launched in Beijing on May 8, dedicated to sharing best practices and tools for poverty reduction in China, Asia and the world.

As the first online platform in China focusing on poverty reduction worldwide, it offers information on the latest research in poverty reduction and inclusive growth, including experts' opinions, events, trends and opportunities.

Initiated by the World Bank and supported by the Asian Development Bank (ADB), the Portal is operated by the China International Poverty Reduction Center (IPRCC) and the China Development Gateway (CnDG). Think tanks from Asia, Africa and the Americas are also invited to contribute their knowledge and experience.

Bert Hofman, the World Bank’s Country Director for China, Mongolia and Korea, noted the platform is expected to facilitate international cooperation and knowledge exchange on poverty reduction initiatives around the world.

A glimpse into the Chinese success story via the internet

In the past three decades, China's broad-based and high-speed economic growth helped more than 700 million people rise out of poverty. Hofman noted that “the nature of poverty in China is changing,” which requires the country to maintain moderately rapid growth, accompanied by measures that reduce inequality and put in place social safety nets for the most vulnerable.

Today, the government has a new, ambitious goal of lifting all 55 million extremely poor citizens out of poverty by 2020. There is strong interest, particularly in Global South, to better understand the Chinese experience and the strategies that helped it drastically reduce poverty.

“The World Bank has supported China’s growing role in South-South cooperation for poverty reduction via new ICTs,” said Hofman, noting that the Bank will continue to work closely with the country in this area.

Hong Tianyun, Deputy Director of China's State Council Leading Group Office of Poverty Alleviation and Development, hopes that China and other countries can learn from each other.

"Some villagers in east China's Anhui Province have adopted conditional cash transfer programs, a project to achieve financial support and poverty reduction, which has already been used by some South American countries and proved to be successful in local infrastructure construction and economic development," said Hong.

"Today's launch of the GPIG speaks to China's role as a global player in development, leading by its own example as well as supporting national development efforts across the globe. The combination of support for concrete initiatives through China's bilateral channels and through international organizations and instruments such as the South-South Aid Fund, together with the exchange of our own experiences is widely appreciated by developing countries," said Niels Knudsen, UNDP Assistant Country Director in China as well as Team Leader for South-South Cooperation.

For Hofman, technological progress is a driving force behind economic growth, poverty reduction, citizen engagement and job creation. Information and communication technologies (ICTs), in particular, are reshaping many aspects of the world's economies, governments and societies. In that context, access to the internet has become a vital development tool.

Irene Bain, Social Sector Specialist with the ADB, noted the portal’s critical importance since "poverty reduction funding alone may be insufficient - even unsustainable - without knowledge inputs and outputs, including through platforms like this.”