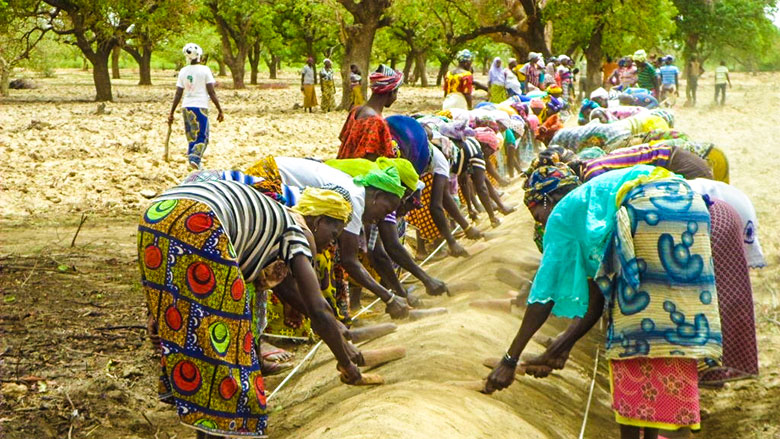 Female farmers participated the most in community works and thus have received 45% of the rehabilitated lowlands for rice production.

BISSIGA, February 10, 2016—For several years now, life has been a constant struggle for much of Burkina Faso’s rural agrarian population. A severe drought in 2011 scorched what were already arid lands. Crops withered under the Saharan sun, yielding poor harvests and leaving meager food stocks for villagers and their animals. Since conflict erupted in neighboring Mali, the Burkinabe people living along the border have also had to confront an influx of Malian refugees, sharing and rationing the few resources they have. Many have had to resort to living off food aid.

According to the 2015 Global Hunger Index, Burkina Faso ranked 87th out of 104 countries in terms of levels of hunger, with 20.7% of its population being undernourished. Weak food production systems, a capricious climate, and significant poverty have created a vicious cycle for Burkina’s farmers that is seriously jeopardizing the country’s food security.

" In our culture, it is difficult for women to possess land. Thanks to the project, I now have my own plot of land from which last year I produced four bags of paddy rice. I distributed one bag to my neighbors, I sold the second bag to pay the school fees of my children, and the other two bags are to feed my family and contribute our share to the community savings to purchase inputs for the next planting season. "

A smallholder farmer from Bissiga, in Burkina’s Central Plateau region. 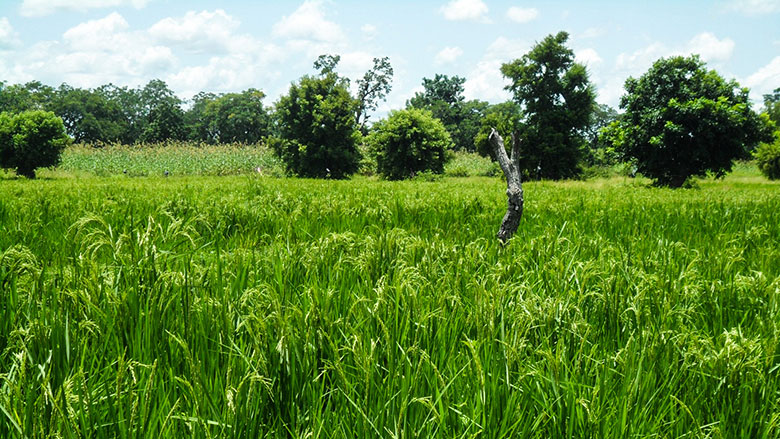 Thanks to the project, 7,820 hectares of land were rehabilitated for rain fed rice production providing 30,000 producers with income.

So how can Burkina’s poor producers break out of this cycle when they lack the means to purchase high yielding drought resistant agricultural inputs, or vaccinations for their poultry?

One of the solutions is a matching grant system implemented by the World Bank’s Agricultural Productivity and Food Security Project (better known by the French name Projet d’amélioration de la productivité agricole et de la sécurité alimentaire or PAPSA) that helps smallholder farmers share the cost with the project. Under the supervision of the regional Chamber of Agriculture, local community leaders, and local authorities, male and female farmers are invited to contribute their share of the costs through community works such as the preparation of lowlands for rice farming. This includes clearing the land of rocks, turning over the soil, organizing the plots, and constructing water retention systems. Those who have contributed the most to community works are provided cleared plots of land, technical expertise, training, improved seed varieties, and fertilizer for their rice crops.

The project observed that female farmers were the group that participated the most in these community works, thus more than 45% of the prepared lowlands have been distributed to women. For these female farmers, this system has completely changed their lives.

“In our culture, it is difficult for women to possess land. Thanks to the project, I now have my own plot of land from which last year I produced four bags of paddy rice. I distributed one bag to my neighbors, I sold the second bag to pay the school fees of my children, and the other two bags are to feed my family and contribute our share to the community savings to purchase inputs for the next planting season,” explains Alizèta Kabore, a smallholder farmer from Bissiga, in Burkina’s Central Plateau region.

Financed by the World Bank, the Agricultural Productivity and Food Security Project is giving hope back to farmers and increasing productivity. Men and women are going back to tending their fields, and have begun to reap the benefits of this new system. Project support for rain fed lowland rice production has helped clear 7,820 hectares of land for rice production providing 30,000 producers with income, 45% of which are women. In 2014, rice production in Burkina Faso saw a significant boost in the form of an additional 15,000 tons of rice. Thanks to new techniques and better inputs, farmers are learning how to retain more water in their fields and how to fertilize them.

Similar results were observed in poultry, cattle, and pork farms. Techniques such as artificial inseminations are boosting cattle reproduction rates, and the construction of 459 modern chicken coops is reducing poultry mortality. In addition, 54% of local poultry are now vaccinated again Newcastle disease. While poultry and beef makeup Burkina’s main meat staples, pork production this past year brought in an estimated 26 million FCFA.

However an increase in food production is only half the battle. Solutions are also needed to address farmers’ access to credit, surplus storage, and market distribution.  Access to credit remains a big challenge for rural farmers as financial institutions are usually reluctant to finance smallholders farmers due to the lack of collateral and the high risk related to agricultural production.

To improve smallholders’ farmers’ access to rural credit, the project has promoted the warehouse receipt system also known as warrantage. An inventory credit system, warrantage allows farmers to use their harvests as collateral to obtain credit.

“Under the project, a farmer will generally deliver his or her harvest to a local warehouse, whose access is held jointly by a microfinance institution and a farmer’s association, usually in the form of two pad locks.  Upon delivery of the harvest, the farmer receives credit which he or she uses to buy essential inputs for the next planting season, pay children’s school fees, or invest in other revenue generating activities,” explains Elisée Ouedraogo, Senior Agricultural Economist at the World Bank Office in Burkina Faso.

The credit advance generally covers a period of several months and allows the farmer to stock their harvest until food stocks run low and they can ask for higher prices. At the end of the credit period, farmers can sell their harvests, repay their credit and use the difference to buy seeds, fertilizer, small pumps and other inputs which help to increase yield and production. Part of the harvest may also be kept by farmers for his or her own consumption. Under the project, 222 warrantage schemes have been promoted and 4,700 tons of grain stored, allowing smallholders farmers to mobilize the equivalent of $700,000 in credit from microfinance institutions.

The Agricultural Productivity and Food Security Project will close in 2018, signaling its long term support for reinforcing Burkina’s agricultural and livestock value chains. With more food products available in rural markets, Burkina Faso can significantly reduce risks of food insecurity and improve its economy. Given that the country’s economy is primarily based on the rural sector, which employs 86% of the labor force (National Population Census, 2006), a productivity-led growth in the agricultural sector is the key to new employment opportunities, higher incomes, and a brighter future.