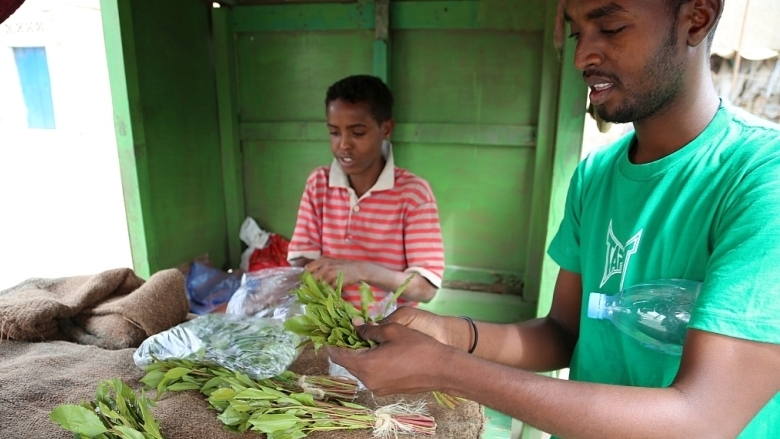 When the sun hits its peak, sweltering, above the arid desert, Moustapha Osman Ali, a resident of Djibouti city, kicks off his daily habit. It is not the second half of his daily job, nor his afternoon siesta. It isn’t even the cycle of prayers - common in the Islamic world - but rather chewing a flowering and tender green leaf known as qat.

Sometimes the practice lasts up to 14 continuous hours a day.

Devoting that much time to any social pastime can be counterproductive, but it is especially alarming when the indulgence is harmful to one’s health. Qat, also pronounced Khat in some areas in the region, contains alkaloids, which are structurally related to amphetamine.  These leaves, which need to be consumed within 48 hours of their harvest, have a stimulating effect and cause euphoria and hyperactivity for those who chew it.

While some Djiboutians chew qat as they go about their daily work, others like the 29-year-old Ali, resort to this mild narcotic to have “quality time” during social gatherings. Although the World Health Organization (WHO) does not consider qat to be a “seriously addictive drug”, it says that qat affects sleep and causes persistent hallucinations among its users, leading to rebound effects such as late awakening, decreased productivity, and day-time sleepiness.

Ali, a high school graduate, has been looking for a job for quite a while now, but it would be difficult for him to compete in any job market while spending most of his days under the influence of qat. Unfortunately he is not alone, his own three brothers, most of his friends, and around 50 percent of males in this Horn Africa nation consume qat on a daily basis.

Almost every morning, massive shipments of fresh qat arrive – mostly by trucks – from Ethiopia and are delivered to retailers across the country. By lunch time, a significant number of Djiboutian men retreat inside homes or under the shade of walls to gnaw gently on ball-sized pieces of the plant nestled in the sides of their cheeks. Qat consumption not only reduces employability and negatively impacts productivity among users in this poverty-stricken country, but it is also a huge drain on the economy.  Djibouti has a population of a little less than 900,000 - 23 percent of whom live in extreme poverty. Despite low incomes, it is estimated that 20 to 30 percent of a family budget is spent on qat; an amount that exceeds everything, including expenditures on education and health, except food. Additionally, qat consumers run the risk of contracting illnesses such as diabetes, obesity, tooth decay and high blood pressure.

To mitigate the negative effects of qat, the World Bank has begun a project aimed at reducing its consumption among youth by both raising awareness of its consequences and boosting the skills young people need for employment. The project, carried out by the Middle East and North Africa Multi-donor Trust Fund, is financed by Britain, Denmark, Finland, Norway and the World Bank.

The MDTF team based in Djibouti City works with young people in the capital and in the towns of Ali Sabieh and Obock. Through face-to-face activities, including discussions with community and religious leaders, sports competitions, dictation and drawing competitions and theater plays, they raise awareness about the negative effects of qat on people’s lives.

When asked about how raising awareness can help cut qat consumption, Fatou Fall, Senior Social Development Specialist at the World Bank, says that by conducting awareness and outreach sessions, her team tries to “inform and sensitize youth on the various impacts” of qat consumption.

The project’s outreach team has so far reached over 5,500 young males and females since the start of the project in June 2015. The initial objective was to reach 3,000 youth.

Spreading among women and children

Men are not the only consumers; qat chewing among women, including young girls, is on the rise. Surveys show that qat consumption among women jumped from 3 percent in 1996, to 7 percent in 2006 and 14 percent in 2010.

Fozia Djibril Ahmed, 50, is one of the women who attended a MDTF organized session in November. Ahmed, who has chewed qat for the past 12 years on average 7 hours daily, uses the green leaf to help her sleep. She is prepared to quit her age-old habit, but only, she says, after “I find a job.”

Increasingly, teenagers are also resorting to this social lubricant.  While recent data is not available, based on estimates by UNICEF in 2008, 4.7 percent of children use qat every day and another 7.4 percent indulge once per week.  Consumption among children aged 15 and under, who make up around 35 percent of the population, is also becoming disturbingly more common.

Abdourahman Moussa Said is only 17 years old, but he has been a regular qat consumer for the past  year. He, too, has come to a MDTF activity, seeking help. Said receives a meager monthly stipend from his older brother, and spends most of it to purchase qat and chew with his friends “for pleasure”.   He dropped out of school after grade 6 and similarly conditions quitting his habit on finding a job.

Fatou, who is MDTF’s Task Team Leader for this project, says that her colleagues have held numerous sessions in the three community development centers in order to raise awareness among children. The team has also employed specialized consultants, who help MDTF beneficiaries in gaining employable and life skills, as well as finding jobs and internships.