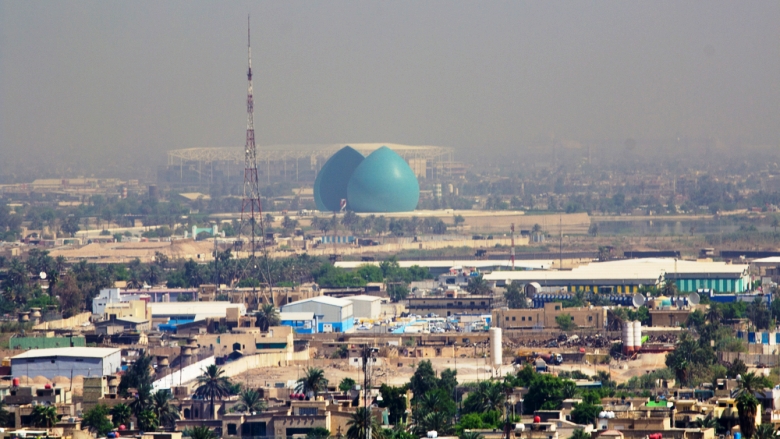 Aerial photo of the city of Baghdad, Iraq

Iraq is facing a sharp increase in public expenditure at a time when the price for oil, the source of 90% of its revenue, is half what it was two years ago. Iraq’s economy is reeling from the impact of coping with no less than 4 million of its citizens internally displaced by conflict, as well as having to fight the Islamic State (IS) insurgency, and manage the pressure of hosting almost 250,000 Syrian refugees.

The World Bank Group is trying to tackle the roots of instability in countries like Iraq as part of a new strategy for the the Middle East and North Africa (MENA) region. The Group’s International Bank of Reconstruction and Development (IBRD) has issued Iraq US$1.2 billion in Development Policy Financing (DPF)—or budget support—to help it weather the crisis. This is the second time in 2015 the Bank has moved to provide support to Iraq. In July, the Bank provided Iraq with a US$350 million loan for an emergency operation to restore basic infrastructure and public services to Iraqi citizens in municipal areas liberated from the so called Islamic State, and now under government control.

. Its central location and multiple frontiers mean it is also strategic; what happens in Iraq affects the region as a whole. “The economy is going through an extremely difficult time, and people’s suffering borders the unbearable. We think that helping the Iraqi economy recover fast, and helping Iraq stabilize, will have great benefit not just for the people of Iraq but also for the region,” said Ferid Belhaj, Country Director for the Mashreq Region.

“Iraq is a deeply oil-dependent economy. When the price of oil declines, you really see the impact on the country’s economy. This year, economic growth will be near zero, and income per capita has fallen sharply since 2013,” said Auguste Kouame, World Bank Practice Manager for Macro and Fiscal Management. “Low oil prices are likely to persist, and given the fluid security situation, if we don’t help now, the situation in Iraq could deteriorate to the point where the cost of helping would be even higher than it is today.”

This DPF loan focuses on three areas, the first of which is improving public expenditure managment. In November, the government reduced the salaries of highest paid civil servants and increased those of the lowest paid civil servants, thus acting on redistribution and easing social tensions at neutral cost. Iraq has taken steps to halt 30,000 government pensions from going to beneficiaries who had not earned them. The government has also created a public debt management unit and is better managing public investment programs by choosing projects that have been properly reviewed through feasibility studies.

Second, the DPF is supporting improvement in the sustainability of energy supply. Iraq is taking steps to reduce gas flaring from its oil wells and plans to put in what’s needed to harness natural gas and use it to generate electricity. This reform will have significant benefits for public financing, the country’s external position, as well as for the environment. . To further improve public finances, heavy consumers of electricity, such as industries and businesses using power for 24hrs/7 days a week, will see the subsidies they used to receive on energy, reduced.

Third, the loan is supporting an improvement in the transparency of state-owned enterprises. A database of state-owned enterprises, known as “SOEs”, has to be created. Often non-existent or underperforming, many of these SOE have previously been used as employment schemes. The government has also said it will allow private banks to do business with it in competition with Iraq’s two large state-owned banks. Iraq’s banking sector will be expected to comply fully with international regulations designed to stop money laundering and the financing of terrorism. If successfully implemented, the reforms supported by this loan will help stabilize the economy and lay the foundations for inclusive growth for all Iraqis.