The Magic and the Ease of the Number: A Dutch Lesson for Poland

CPB Netherlands Bureau for Economic Policy Analysis (CPB) established in the middle of the last century in the Netherlands, is a unique example of a state-owned - yet independent - research institution, firmly rooted in a country’s administrative structure that can exert influence on a country’s economic policy. On November 26-27, representatives from the CPB visited Poland to share their experiences during the workshop, organized by the World Bank office in Warsaw.

The CPB may be an inspiration for Polish authorities, who were given a strong reform mandate in the recent election. Lately, several representatives of the new government have indicated that they would like to see a powerful, independent institution to support policy making in Poland.

“Certainly, there is no single, universal model for such an institution that can fit in the context of every country. Nevertheless, the new Polish government can get some inspiration from the example of the Dutch CPB,” notes Leszek Kąsek, Senior Economist in the World Bank office in Warsaw.

“It would really be useful to obtain regular and comprehensive support from an independent institution similar to the CPB – a body equipped with an assortment of robust models and other tools. It would help in implementing the planned reforms and it could improve the quality of public institutions.”

Poland has yet to establish a similar institution – one that can provide timely, regular analyses of economic plans and policies, or evaluate decisions made by political parties, governments or public institutions through an economic lens. But Poland in no exception in that regard: the Dutch CPB has no such equivalent in Europe.

What is the secret of its unique status?

‘If I were to choose one key attribute of our modus operandi which has kept us afloat over the years, regardless of changing circumstances and through [economic] currents and cabinets, I would point to independence. Building your independence is a long-term process that takes decades,” says Edwin van de Haar, the Head of the CPB Communication Team.

“Another important thing is that citizens – i.e. the taxpayers who finance our operation – know us very well and trust us,” he adds.

The CPB (literally translated, CPB in Dutch means ‘Central Planning Bureau’) was established in 1945 by Jan Tinbergen. Twenty-four years later, Jan Tinbergen was awarded the first ever Nobel Prize in economics for his contribution to the development of econometrics.

Despite its name (which may sound rather off-putting in a country like Poland, which has a history of nearly 50 years of centrally planned economy),  the planning bureau in Holland does not deal with  economic central planning. In fact, its role is analytical – charged with evaluating the implications of both ongoing and proposed actions. Its motto and approach can be summarized as ‘the magic and the ease of the number.’

Eighty percent of CPB funding is provided by the Ministry of Economic Affairs in the Netherlands. The rest comes from other ministries, the European Union, and other sources.  CPB staff is made up of almost 150 people, most of them economists and mathematicians with PhDs.

What types of analyses are conducted by the CPB?

Every quarter, the bureau publishes short- and mid-term forecasts for key macroeconomic indicators in the Netherlands. They perform in-depth sectoral studies, examine the impact of certain political and economic decisions on public finance, and evaluate the measures undertaken by the authorities in a number of areas. As an example, currently the CPB is reviewing the impact of the Transatlantic Trade and Investment Partnership (TTIP) between the European Union (EU) and the United States, and looking at the significance of the potential British exit from the EU for Dutch economy.

Although Poland has not developed a similar institution, the workshop in November represents a positive step toward recognizing the value of such an institution.

Structure of the CPB 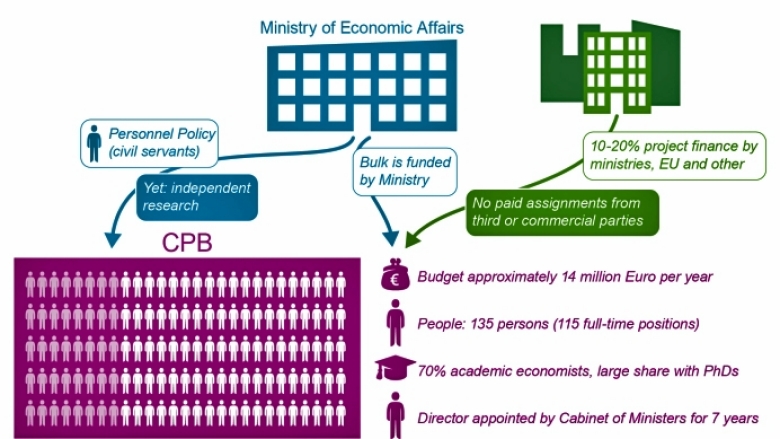