Power to the People in Vanuatu

Vanuatu's rural population, especially poor families, still has very limited access to electricity. The World Bank is working with the Government of Vanuatu and power providers to connect more than 4,000 of the poorest families to electricity, helping the country reach its target of 90% access by 2020

Luganville, Vanuatu – The idea that an appliance or a light bulb will work at the flick of a switch is something that most of us take for granted. After all, electricity is just ‘there’.

Yet despite the many benefits electricity brings to families the world over, for almost 75% of homes in Vanuatu, this still remains unattainable for two simple reasons: it is too expensive and; Vanuatu is one of the most remote, dispersed countries on earth – with 260,000 people living on 64 inhabited islands across hundreds of square kilometers of ocean.

In Vanuatu’s main urban centers of Port Vila and Luganville, electricity is delivered through grids, which distribute electricity generated at power plants to homes and businesses using power lines and underground cables. Some areas on the islands of Tanna and Malekula also have limited access to grid electricity.

Electricity: out of reach

Despite having electricity grids in place in these areas, the cost of installing safe and reliable household connections puts electricity out of reach for many, such as Tanna resident Marie Neprei.

" At the end of the day electricity is very expensive. At first we haven’t got electricity. We only use torches and kerosene light, and sometimes it’s really dangerous. Sometimes when you miss the kerosene it might burn the house. "

To address the needs of people like Marie who continue to rely on dangerous kerosene lamps and candles for light, the World Bank has partnered with the Government of Vanuatu and local energy providers to finance one-off subsidies of up to 80% for the cost of household connection and wiring – making electricity access a reality for more than 4,000 of Vanuatu’s lowest-income families.

Under the Improved Electricity Access Project, more than 4,000 homes will be wired similarly in accordance with Australian, New Zealand and French standards, including laying an underground cable from the utility meter box to a ‘ready board’ (a type of fuse box) in the home. Home owners will receive a ready board with necessary safety switch protection, two light sockets with switches, two power outlets and two energy-efficient light bulbs.

Luganville resident and student Learin Tari knows firsthand the benefits of electricity. Her family was among the first in Vanuatu to receive a subsidized connection under the project.

“We use electricity to charge mobile phones, watch TV and also it gives us bright lights. And it also helps life in home to be easier. I think everyone should have electricity in Vanuatu.”

Rusiate Calalevu, an electrical technician at Vanuatu Utility and Infrastructure Limited, is working on the project.

“We have seen that where there is electricity there is easiness in everything; like lights, cooking and the daily needs. And it’s also important for education; children can stay up later and study with good lighting.

“Without electricity, there is hardship.”

The project, partially funded by the Australian Government through the Global Partnership for Output-Based Aid, builds on years of work led by the government and assisted by the World Bank to build a stronger energy sector that delivers safe, affordable and sustainable energy to the people of Vanuatu.

In 2008, with assistance from the Australian Government and the World Bank, the Government of Vanuatu established the Utilities Regulatory Authority to protect consumers and provide the legal framework for the pricing and service standards that are now being delivered. A significant milestone for Vanuatu came in 2013, with the completion of the Vanuatu National Energy Roadmap outlining the overall strategy to ensure Vanuatu can achieve its goal of 90% electricity access by 2020.

The target of 90% access is on-track to be reached. Learin Tari’s dream of everybody in Vanuatu having electricity is a huge step closer to reality. 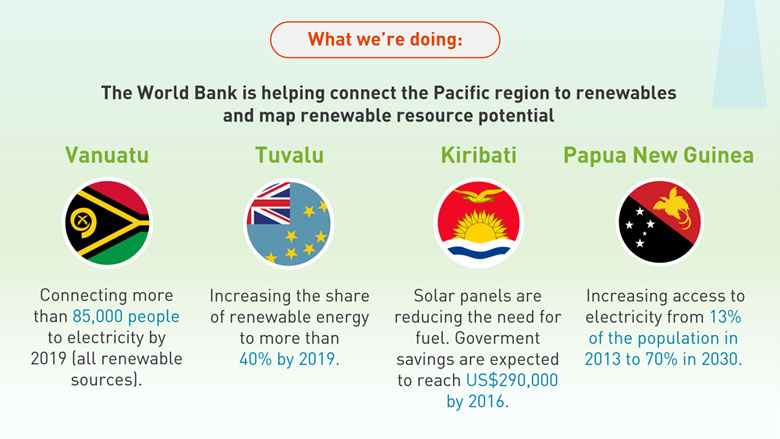 Working Towards more Efficient and Sustainable Energy for the Pacific Islands