Xining, China – Xining, the capital of Qinghai province in western China, and the largest city on the Tibetan Plateau, lies in the Huangshui River valley. Surrounded by steep barren mountains and situated on heavily eroded bedrock, the city is exposed to periodic flash floods caused by intense rainfall, especially during summer.

Flooding often comes with soil erosion – in Xining, 61% of the watershed is considered vulnerable to soil erosion, putting people’s lives and livelihoods at risk.

Since 2009, the Xining Flood and Watershed Management Project has been assisting Xining Municipality to improve its capacity in flood protection, increase wastewater collection, and improve soil and water conservation in 17 watershed areas.

Flood-protection infrastructure built through the project, such as dikes, access roads, and wastewater and storm water collection pipeline systems, will help Xining withstand a “100-year flood” (or a really big flood that the city should expect to happen about once every 100 years).

A state-of-the-art flood warning center was also built, setting up a comprehensive system for flood forecasting and warning in the city.

Beyond these improvements, the beautiful landscaping surrounding the riverbanks made it a popular spot for recreation for the 2.2 million residents of Xining.

Li Kengcheng is 84 years old and has lived near the Beichuan River, a tributary of Huangshui River which runs through the city of Xining, for over thirty years.

“The riverbank was all coarse gravel. No one would come here,” he says. “After the river was cleaned up and the road was paved, we come here whenever we have time, to sunbathe or just spend some time together.”

Project officials say that what made this project a success is “integrated” flood risk management which included both structural and non-structural activities.

“Starting with project design, we adopted an integrated approach to flood management, not simply focusing on building dikes or planting trees as we had in the past. The project has set a good example by integrating watershed rehabilitation, flood control works, river bank revamping, wastewater collection and environmental improvement,” says Chen Sheng, a manager with the Project Management office in Xining Municipality.

a 54-year-old farmer in Datong County of Xining Municipality

In Xining, like many other places in China, watersheds face environmental problems, including soil erosion, landslides, heavy sedimentation, water pollution, floods and droughts. With the project, Xining’s watersheds have been restored.

The participatory approach employed by the project enables rural communities to undertake and maintain watershed management activities, with the goal of increasing their incomes and improving their lives.

“We listened to villagers and the project helped solve the most pressing issues in their community,” says Yang Baoxing, Deputy Director, Water Affairs Bureau of Datong County, Xining.

Investments were also made to improve the livelihoods of farmers in degraded watershed areas, providing them with solar water heaters, walking tractors and three-wheeled motorcycles.

These helped promote the use of green energy and change farmers’ unsustainable use of land and water resources. Without the walking tractors, for instance, their former farming activities contributed to issues like overgrazing, which caused destruction of vegetation and led to soil erosion.

Shen Junru, a 54-year-old farmer in Datong County of Xining Municipality, now tills the land with the new walking tractor he bought with project support.

“Before, we ploughed with horses and oxen. The animals grazed on the slope and destroyed the vegetation,” says Shen.

Animals plough only 1 mu (Chinese unit of land measurement which equals to 0.16 acre) of land per day, whereas a walking tractor can plough 4-5 mu.

“It is much faster and saves labor and time,” says Shen. “Ploughing with animals was shallower so crop yield was lower. The tractor ploughs deeper, and our crop yield has doubled.”

Besides, as Shen and his family don’t need to look after animals during the off- season, they started to do small businesses in their spare time and earn extra money.

Under the project, which will close at the end of 2015, 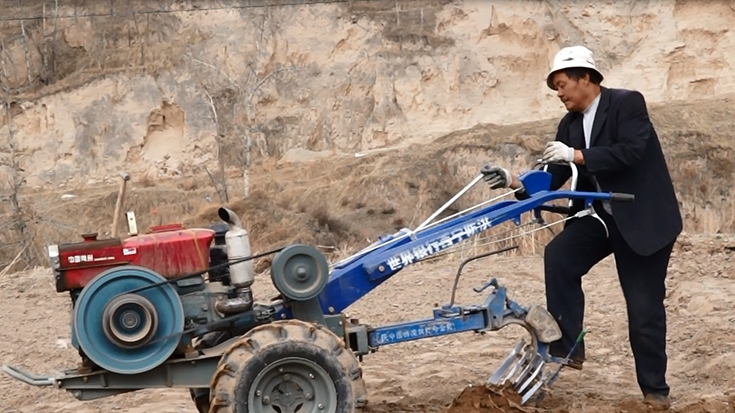