Financing the Future of Development 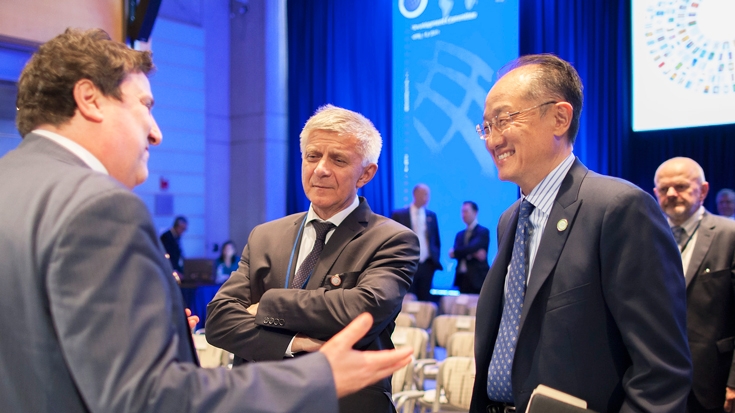 The 2015 World Bank Group-International Monetary Fund Spring Meetings are over, but a pivotal year in development has only just begun.

By September, the world probably will have a new set of ambitious development targets, such as ending extreme poverty and hunger by 2030. In December, leaders will come together to agree on a way forward to tackle climate change.

At the Spring Meetings, UN Secretary-General Ban Ki-moon, heads of development banks, and government ministers discussed these goals and a critical issue: how to raise the trillion or more dollars a year needed to finance them.

Achieving the sustainable development goals, as they are known, will require a “transformational vision that combines all potential sources of financing,” including official development assistance (currently $135 billion), public and private sources of funds, said the Development Committee in a communiqué at the close of the meetings. The options include addressing illicit financial flows and seeking effective ways to promote and encourage private finance and investment and coordinated action on global issues.

Success in achieving the goals will take more than money, however. It will require a “global change of mindsets, approaches, and accountabilities to reflect and transform the new reality of a developing world with highly varied country contexts,” said the World Bank Group, IMF, and other multilateral development banks in a joint statement.

“We’ll unlock private sector investment. We’ll set our ambitions much, much higher – meaning that we’ll aim to mobilize not just billions of dollars to end extreme poverty. Instead, we’ll mobilize trillions of dollars. One billion people want an opportunity for a better life. They will continue to insist that they have an equal chance at a better life for themselves and their children. They’re counting on us.”

The Development Committee said it welcomed “innovative solutions to global challenges” and encouraged the World Bank Group to “enhance its support on infrastructure development and financing, including an enabling environment to mobilize private long-term finance for commercially-viable projects, and strengthening public and private partnerships, including through the recently approved Global Infrastructure Facility.”

It called on the Bank Group and IMF to help countries build resilience to adverse shocks and to to help countries hit hard by falling export receipts, tax revenues, or remittances, and to advise on energy pricing and the use of clean energy.

The committee commended the Bank Group’s commitment to “mainstream low-carbon development and Disaster Risk Management while maintaining focus on its poverty eradication mandate” and encouraged the Bank to work toward a successful climate change agreement at the 21st Conference of the Parties of UNFCCC in Paris. “We take note of the WBG and IMF work on appropriate market-based solutions and energy policy reforms,” the committee said.

" One billion people want an opportunity for a better life. They will continue to insist that they have an equal chance at a better life for themselves and their children. "

On Ebola, it said the Bank Group’s rapid response was “critical” to contain the outbreak. The Bank fast-tracked assistance and has committed a total of $1.62 billion to Guinea, Liberia and Sierra Leone for Ebola response and recovery, including $650 million announced during the Spring Meetings.

“Looking ahead, we encourage the [Bank Group] in coordination with other international actors, to explore the potential of a Pandemic Financing Facility to mobilize and leverage public and private resources, including insurance mechanisms, to help countries receive rapid funding in the face of an outbreak based on strong preparedness plans,” the communiqué said.

The committee also welcomed a new Global Financing Facility in Support of Every Woman Every Child to be launched in Addis Ababa in July. " We also note the importance of addressing hunger and malnutrition.”

A new fund, the Power of Nutrition, announced this week, aims to unlock $1 billion to help millions of children get proper nutrition and reach their full potential. The independent fund is supported by Children’s Investment Fund Foundation, UBS Optimus Foundation, the UK’s Department for International Development, UNICEF, and the World Bank Group, and is open to private and public investors.

The Bank Group and faith-based organizations joined forces on the goal of ending extreme poverty by 2030. More than 30 leaders jointly drafted a “moral imperative” statement pledging to use their voices and influence to help achieve the goal; several took part in an event ahead of the meetings, The Power of Faith to Help End Extreme Poverty.

On Friday, the Bank Group pledged to enable as many as 1 billion financially excluded adults to gain access to a transaction account and hosted an event at which chief executives from major oil companies and senior government officials from several oil-producing countries committed, for the first time, to ending the practice of routine gas flaring at oil production sites by 2030 at the latest.

The Development Committee is a ministerial-level forum of the World Bank Group and the International Monetary Fund for intergovernmental consensus-building on development issues. Known formally as the Joint Ministerial Committee of the Boards of Governors of the Bank and the Fund on the Transfer of Real Resources to Developing Countries, it was established in 1974.