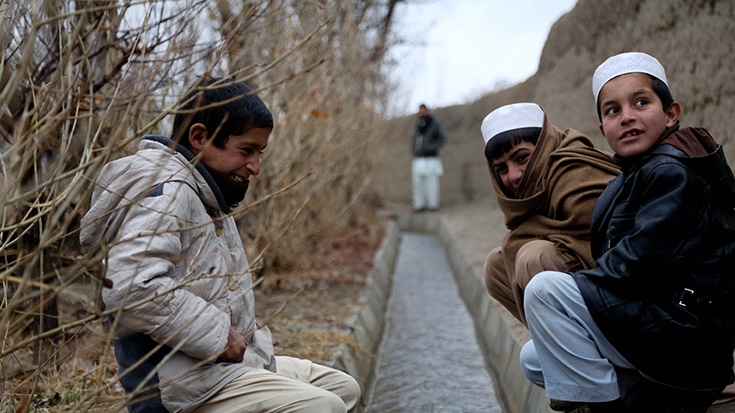 Ahmad, Qasim, and Sabor are sitting beside the canal enjoying the water.

SHAKARDARA DISTRICT, Kabul Province – On a cold winter day, farmers in Danishmand village of Shakardara district have gathered to discuss cultivation conditions and best techniques to prepare their land for farming.

Not long ago, farmers would have panicked if the water level was as low as it has been this year, raising fears of drought and severe water shortages. But as they talk, they are unconcerned, despite the lack of rain. Their fears have been eased by an initiative of the Ministry of Agriculture, Irrigation and Livestock’s On-Farm Water Management Project (OFWMP), supported by the Afghanistan Reconstruction Trust Fund (ARTF). The bottom of their irrigation canal has been lined with cement to decrease water wastage and provide farmers with a more dependable supply of water.

“We don’t fear drought that much anymore,” says Khan Zada, 50, who farms to support his family of 10. “Previously, a great amount of water was wasted as it soaked through the bottom of the canal, meaning that the water level was not stable. Now the water reaches directly where it is needed without waste, as the bottom of the canal has been cemented.”

The canal is a source of pride for local farmers. Before the initiative, villagers gathered up to 100 people and spent 20,000 Afghanis (almost $350) to clean the canal to prevent water loss. Now, thanks to the project, time and money are saved. 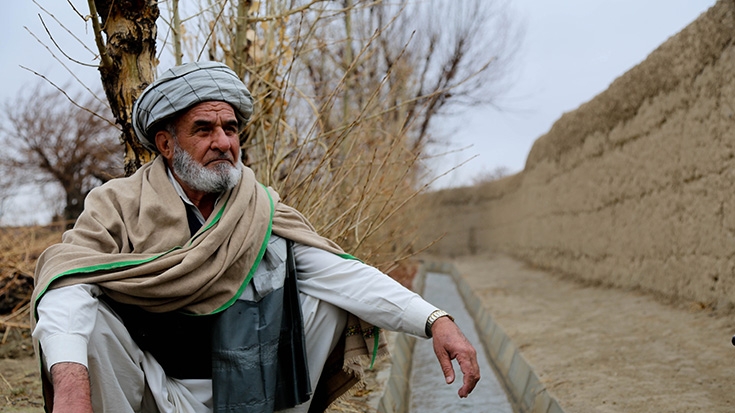 Haji Mohammad Abrahim says that the construction of the canal has been very beneficial for his farm.

Rumi Consultancy/World Bank
" We don’t fear drought that much anymore. Previously, a great amount of water was wasted as it soaked through the bottom of the canal, now the water reaches directly where it is needed without waste. " 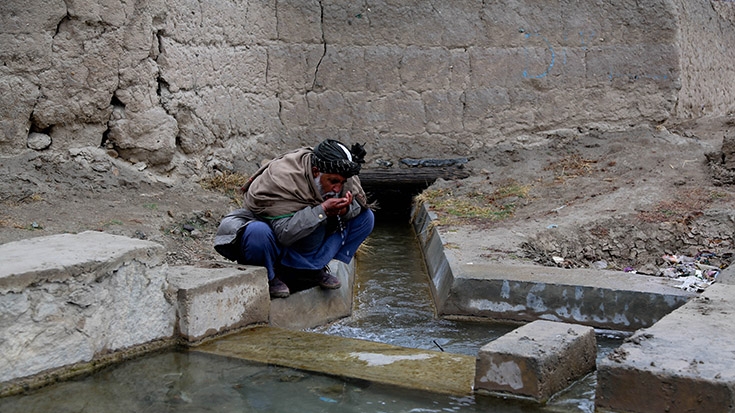 Increase in farming and arable land

Some 6,000 residents live in Danishmand village. The village has more than 500 hectares of land, but because of water shortage only around 390 hectares had been cultivated prior to the canal’s reconstruction. Today, all the land is cultivated, with no water shortage issues.

The reconstruction of the canal began in July 2012, and was completed in October of the following year. The canal is 13 kilometers long and a meter wide, and was reconstructed on a budget of 7.5 million Afghanis (nearly $130,000) with support from the OFWMP. With a $25 million grant from ARTF, OFWMP aims to support on-farm water management investments in five regions (Central, Eastern, Southwest, Northeast, Northern), covering a total of 10,000 hectares. OFWMP improves agricultural productivity in project areas by enhancing the efficiency of water use.

“The biggest benefit of the canal is that it created almost 145 hectares of newly arable and farmable land for the residents of this village,” says Mohibullah Afzali, a local engineer of the OFWMP.

Haji Mohammad Ibrahim is a member of Danishmand village’s local elders council. He says that the improvement of the canal has not only prevented water wastage, but has also helped the water reach the village and farmers more quickly.

“Our assessments confirm that before the project, at least four inches of water was wasted when it was absorbed into the ground. It used to take four hours for the water to reach our land, but now it takes only half an hour,” says Ibrahim.

In addition to the benefit to irrigation, some families in the village use the canal for non-farming purposes. Zee Shah, 12, is one young resident who has benefited. The canal passes near his house, and his family uses the water for washing clothes and dishes. “The water used to be muddy and dirty, and unusable,” he says. “Now you can see how clear it is.”