“Back then, the alley was so narrow that only one motorbike could get in,” said Mai. “There was no drainage so it was often flooded, making garbage float and mosquitoes breed. It was unsafe for our health. There were few street lights, allowing criminals to hide in the dark corners.”

Despite achievements in poverty reduction, urban poverty in Vietnam started rising in the early 2000s, especially among unregistered migrants who are often among the poorest in cities. Low-income areas faced frequent flooding and suffered from poor sanitation. They had no direct water supply and sewerage connections. These caused serious health and environmental risks to the urban poor.

Implemented from 2004 to 2014, the Vietnam Urban Upgrading Project addressed those challenges in the cities of Hai Phong, Nam Dinh, Ho Chi Minh City and Can Tho.

Under the World Bank-supported project, more than 200 low-income areas like Mai’s neighborhood have been upgraded, directly benefiting 2.5 million urban poor. Homes now have water supply, drainage, electricity, and sanitation services. Narrow, dirty and flooded alleys are now paved, wider, cleaner and safer.  Ambulances and fire trucks can now access houses. Children can play around the neighborhood and residents can expand their businesses.

“Running my business is much easier because the street is cleaner and safer,” Mai said. “Trucks can carry goods to my door. More shops and restaurants have been opening along this big street.”

The Tham Tuong Canal in Can Tho City was dredged and renovated, turning from a heavily polluted canal into a clean and green waterway.

World Bank
" Running my business is much easier because the street is cleaner and safer. Trucks can carry goods to my door. More shops and restaurants have been opening along this big street. "

The project did not just invest in infrastructure, it also provided access to micro loans for home improvement and income generation for households whose incomes are in the bottom 40%.  So far, the repayment rate is almost 100%.

“I borrowed 5 million dong [$250] to expand my small shop at home,” said Vo Thanh Khuong, a resident of Binh Thanh District, Ho Chi Minh City. “Our income has increased and I could take better care of the kids. Our living conditions are getting better.”

“Having access to credit helps the poor benefit even more from improved infrastructures,” said Keiko Sato, Acting World Bank Country Director for Vietnam. “This approach really fits the World Bank’s twin goals in eradicating extreme poverty by 2030 and promoting shared prosperity by improving the living standards of the bottom 40% of the population in every country.”

Communities actively participated in project design and implementation. They attended numerous meetings and supervised the infrastructure upgrading work in their neighborhoods. They also contributed their time, efforts and even donated land to improve access in the upgraded areas.

“Together with other members of our community, I frequently checked the project’s progress in our neighborhood to make sure everything was done in a timely manner with high quality,” said Nguyen Thanh Tu, Member of the community supervision board, District 4, Ho Chi Minh City.

With $382 million financing from the World Bank and $140 million counterpart funding from the Government of Vietnam, the project has turned 200 low-income areas into vibrant, attractive communities, and transformed the lives of millions of urban poor.

“Our family’s income has increased twofold since 2010,” said Mai. “We are very happy and we will maintain this clean and green environment for our own benefit.” 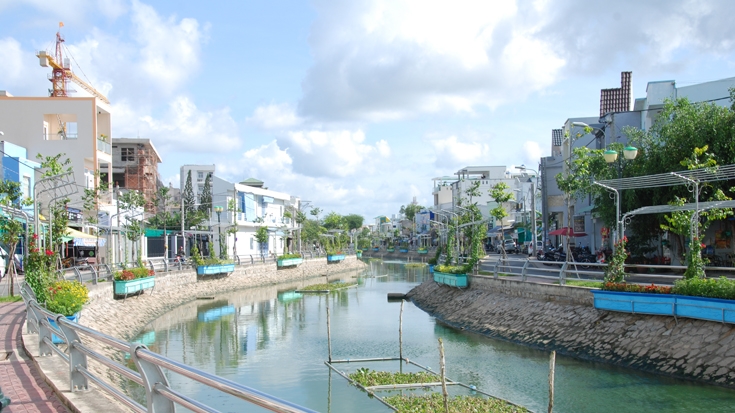 Before and After: The Vietnam Urban Upgrading Project