How Telecommunications Changed the Lives of Herders in Mongolia

Ulaan Uul, Mongolia – In the world’s least densely populated country, where three million people are spread over 1.5 million square kilometers, half of them clustered in the capital of Ulaanbaatar and one third still living a nomadic life, just think how hard it would be to send a message to a herder somewhere in the hills, or hear from someone in a ger (Mongolian term for tent) in the next valley.

As Mongolia increased its wealth, so did its people’s demand for information and communication technologies (ICT) surge. As a result, the ICT market grew over 25% annually in the early 2000s. But in the countryside, where companies found it hard to make headway into the sparsely populated rural areas and provide access to services outside of the main population centers, “teledensity” (the number of telephone connections per every hundred individuals living within an area) was as lean as 1% in 2005.

The World Bank/IDA-supported Information Communications Infrastructure Development Project (ICIDP) helped the Government of Mongolia use a public-private-partnership approach to fill the gap. "Best practice cooperation between the Government and the private sector helped deliver competitive, quality and affordable telecommunications services to remote rural communities, transforming the lives of herders and other rural inhabitants", says Peter Silarszky, who led the World Bank’s support for the project.

“This project allowed us to work closely with the private sector, to complement each other. This was one of the first times that this public-private-partnership happened in Mongolia. This kind of synergy was unprecedented,” says J. Bat-Erdene, former Vice Chairman of Information Communications Technology and Post Authority of Mongolia, now CEO/President of Telecom Mongolia.

In the remote Darhat Valley in Northern Mongolia, herders were packing for the spring migration. “I called my son who lives in the town to come to help us with his transport truck,” says Tsorj, a herder. “Having a phone is the most important thing. I can call relatives who live in the town and nomads in the next valley. It’s also very useful for keeping track of missing animals,” he says.

The project has changed the lives of herders like him and Purevjav.

Purevjav, 70, has witnessed tremendous changes in Mongolia. In the past 20 years, the country has transformed into a vibrant multiparty democracy with a booming economy growing at double-digit rates today.

His children didn’t further their education and became herders like him. “But their children need to go to school. So they moved to towns and cities. Our family is now split up between the countryside and town,” he says.

To stay in touch with the rest of the family, Purevjav makes calls. “We call our children in the town, tell them what we need, such as feed for animals or medicine for us,” he says.

“Before, we used to ride into town to get the doctor and climb over that steep pass,” Tsorj says, as he points at the mountain pass in front of his ger.

Now, just a phone call away, the doctors come to them. “We are able to call in medical emergencies, call for an ambulance,” he says.

World Bank Group
" Having a phone is the most important thing. I can call relatives who live in the town and nomads in the next valley. It’s also very useful for keeping track of missing animals. "

a herder living in the remote Darhat Valley in Northern Mongolia

The life-changing experience for herders, made possible by having phones and access to the Internet, also include better business opportunities, says Tenzin Norbhu, lead ICT specialist at the World Bank.

With better access to information, herders have a stronger market position and are able to secure more favorable prices for their products.

Before they started the spring migration, Purevjav and his wife Tsogtsolma wanted to sell the cashmere they produced this winter. Before doing so, Tsogtsolma called their daughter who lives in town to check on the cashmere prices there.

“Selling around 90,000 tugrik a kilogram here,” the daughter says on the phone.

“Okay, sounds about right. The middleman is here and is offering 88,000 tugrik,” Tsogtsolma replies.

“The middleman started saying the price of cashmere had dropped. Then he looked around to see if our phone was working,” says Purevjav.

“Without the phone we would have gotten less for our product. Prices 'mysteriously' drop when you don’t own a phone,” he says.

“Phone connections have dramatically changed rural business practices. People can now adapt to the laws of supply and demand. Herders can now directly connect with local markets, and go even further, by distributing their products on a national scale,” he says. 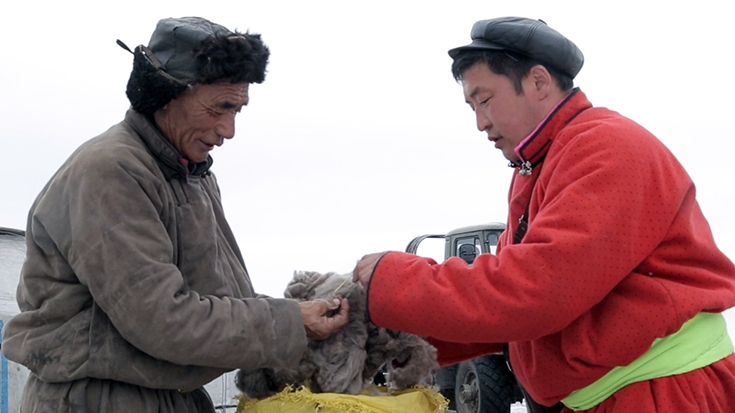