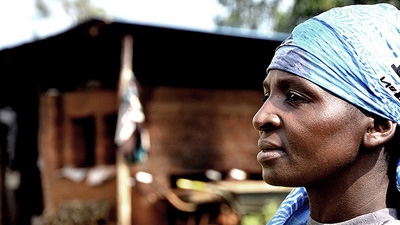 Victim of sexual violence, Beatrice Muderwa, a widow and mother of five children, is gradually learning to live again.

WASHINGTON, December 9, 2013— For the past two decades women’s bodies have become the battlefield as gangs of combatants have committed atrocities in the Democrat Republic of Congo (DRC), according to Dr. Denis Mukwege Mukengere, who recently spoke  at a World Bank seminar on sexual and gender-based violence in Eastern DRC.

"Women in Africa are carrying the economy of Africa on their shoulders. If one destroys them psychologically or physically, the cycle of poverty is perpetuated,” Mukwege said. “If you destroy a woman, you destroy on average six other people,” for the women can no longer care for their children.

" Women in Africa are carrying the economy of Africa on their shoulders. If one destroys them psychologically or physically, the cycle of poverty is perpetuated. "

Director of the Panzi Hospital

A Holistic Approach for Rehabilitation

Mukwege, who was nominated for this year’s Nobel Peace Prize and was awarded the 2008 UN Human Rights Prize for his work and advocacy on behalf of women and girls in the Congo, said he opened Panzi Hospital in 1999 to address the region’s high maternal mortality rate.

Once women and girls began streaming in as a result of rape, the hospital changed its focus, and now provides a holistic approach to SGBV victims that includes psychological counseling, medical care, legal support and finally, mediation and communication with the family and the community to rebuild social cohesion. Many community hospitals in Africa have asked for help to build the same type of program, Mukwege said.

Mukwege said he firmly believes that women can help lead the fight for stability and against poverty in war-torn regions in Africa. “We need to give women tools that will encourage the communities to go towards them, to make them important, respected members of society and to avoid having them apologize for something they didn't commit," Mukwege said.

The World Bank Support for Survivors of SGBV

With support from the State and Peace Building Fund (SPF), the World Bank recently completed a project to provide psychological, medical, legal and economic support to survivors of sexual violence in South Kivu. The project has exceeded its targets: as many as 3,951 survivors have participated, and 114 new Village Savings and Loans Associations have been created to empower women economically.

The Learning on Gender and Conflict in Africa (LOGiCA)* trust fund, in collaboration with USAID, implemented an evidence-based impact evaluation of mental health support for survivors, which used Cognitive Processing Therapy (CPT). The evaluation results showed that the probability of depression or anxiety experienced by the survivors decreased from 71% to only 9%, while the probability of  post-traumatic stress disorder decreased from 60% to 9%.

“This project illustrates that despite the complex task of addressing gender-based violence in fragile and conflict environments, tailored support can have a significant impact on the lives of survivors and communities,” says Pia Peeters, a World Bank senior social development specialist with the Africa Region and the Global Center on Conflict, Security and Development.

Thomas Elbert, professor of Clinical Psychology and Neuropsychology at the University of Konstanz, Germany, described for seminar participants the unique research, supported by the LOGiCA trust fund, looking into why combatants in eastern DRC commit such atrocities against women and also men. He and his colleagues published their findings in a report released in September, “Sexual and Gender-Based Violence in the Kivu Provinces of the Democratic Republic of Congo: Insights from Former Combatants.”

Thomas said this type of brutality during war isn’t idiomatic to men in the DRC. Humans, especially men, are biologically prepared as hunters and to hunt in groups. Under more normal circumstances families and society teach children about moral norms that help keep people from acting on aggressive urges, Thomas explained.

In the DRC, years of war and killing that have traumatized the population, and the lack of opportunities to find productive work or start a family, leave young men with little else to do but join war gangs, Thomas said. And rape by men is normalized in that it’s not always considered bad or immoral. Other societal components such as a lack of state authority and a legal system to punish the perpetrators can enable mass rape, he added.

After interviewing 213 former combatants in eastern DRC Thomas said he and the research team learned that a number of the combatants experienced pleasure in raping, killing or looting. “I was surprised to see this clear link,” Thomas said, “that there is an intrinsic reward to do this. The more “fun” it is to commit the offenses, the more frequently people will do it.”

In fact, mass rape has occurred throughout history, such as the war in the former Yugoslavia in the 1990s, and during major world wars, Thomas said. Between 1991 and 2003, girls and women were raped on a mass scale in 24-armed conflicts worldwide, according to the report.

Thomas’ research team found that Mukwege’s program at Panzi Hospital, with its focus on treating the victim’s physical scars and trauma, help to rehabilitate the female survivors of SGBV so they can return to their productive lives in society. Taking steps to promote education and socialization lessons that enhance the perception of women in society can also help reduce SGBV. The team also suggested that programs should focus on the soldiers with efforts to “mentally disarm ex-combatants” with psychotherapy as a step towards breaking down the cycle of aggression they experience.

Mukwege added that the women who come to the Panzi Hospital are finding ways to heal and to reenter society. Many are making use of the program’s opportunities, which include literacy and numeracy training, small business management and other skills aimed at improving livelihoods and generating income.

“When women and girls who are survivors of sexual violence are supported, they become responsible for themselves, and become change makers in their communities,” Mukwege said.

*The LOGiCA Trust Fund is implemented by the World Bank, with funding from the Governments of Canada, Denmark, Norway, and Sweden, and supports gender-sensitive programming in demobilization and reintegration operations for ex-combatants in Africa’s great lake region.