The Journey to Quench Zomba’s Thirst 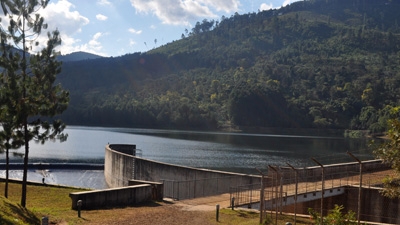 ZOMBA, November 7, 2013 -- In the early 1990’s concern over a special species of butterflies found on Zomba Mountain nearly denied the people of Zomba a reliable source of water. Both the Malawi government and the World Bank, which was supporting the construction of a dam on the mountain, heeded the call not to disturb the natural habitat of the butterflies.

Almost 20 years later, the people of Zomba have a steady supply of water from a dam located at a different spot on the same mountain. Gone are the days when Zomba would grind to a halt, and Chancellor College - the largest of the University of Malawi’s colleges - would close due to dry water taps. And the butterflies still fly.

Jaffali Kumalonje, a long-time Zomba resident, said the lack of available water made life difficult. But now, that has all changed.

“Building a house in Zomba was not always an attractive option when you considered the water problem,” Kumalonje said. “Now water is not a problem even getting connected to piped water is easy.”

It has been quite a journey towards sustainable water for Malawi’s former colonial capital. It started in 1985 with feasibility studies for a new water supply source for Zomba. Construction of Mulunguzi Dam started in June 1997 and was completed in August 2001 at a cost of $28.9 million, replete with water treatment plant and a distribution system. All this was done under the First National Water Development Project (NWDP I).

The NWDP I whose total cost was $82.2million also improved water supply services in Lilongwe and 16 other towns across the country. Further, NWDP I supported the establishment of three regional water boards – Central, Northern, and Southern – complete with organizational structures, business plans, and corporate charters.

According to the Bank’s NWDP I implementation completion report, the Zomba water scheme eliminated the dry season water shortages in Zomba Municipality which caused the regular closure of the university and government agencies, and much suffering among the local communities. Water sales also increased by 68%.

The Mulunguzi Dam projectdrives water from the uplands to the areas of distribution throughout the city below. The construction of Mulunguzi Dam resulted in the creation of a reservoir with a full supply level storage volume of 3.4 million cubic meters. Other hydraulic structures associated with the dam are a concrete side spillway was constructed with a crest length of 50 meters. The purpose of the spillway is to divert extensive floods in order to avoid toping over of the dam crest. There is also an intake tower which houses delivery pipes to which five off takes are installed at different levels.

“This is the kind of investment that can assure Zomba and surrounding areas of sustainable and better water quality to help make the city livable,” Kadiresan said.

“This dam was built to serve 25,000 in Zomba and 100,000 from the outlying rural areas so we should not have situations like those we had in the past,” said Chizalema. “As a city we are looking to the Second National Water Development Project also funded by the World Bank as a catalyst to further achieve greater access to clean water.”

The Second National Water Development Project (NWDP II) was effective in 2007. It was designed to provide continuing support to the Malawi government’s National Water Services Development Plan, which sets forth objectives, targets, actions, an investment plan, and an implementation strategy for increasing water supply coverage and improving water resources management. Through the sector-wide approach, the project contributes to Malawi’s quest to achieve the Millennium Development Goal (MDG) of reducing by half the number of people without sustainable access to improved water supply and sanitation by 2015. Malawi is on course to achieve this MDG.

In Zomba, NWPDII is helping improve operational efficiency and expand water supply. A new water treatment plant has been constructed within the site of the existing treatment plant done under NWPDI. The project has also constructed 13 service reservoirs (both in concrete and in steel) with capacities between 250 and 1,500 cubic meters giving a combined total storage volume of 9,500 cubic meters. A total of 41.1 km of new pipelines have been laid, covering primary distribution and reinforcing the secondary distribution systems to meet future demand for a number of areas. The whole supply scheme is expected to be completed by 2016, together with similar work in other of Malawi’s fast growing towns such as Mzuzu, Kasungu, Likuni, Mponela, Mzimba and Mangochi.

The benefits to Zomba are not only on water supply. Indirect benefits include improved health of the beneficiary population, resulting from improved quality of water and sanitation services, better hygiene practices, as well as time savings through improved access to water supply services. According to Zomba District Assembly Health Office over 79.6% of households now have access to improved water resources. The Integrated Household Survey for Zomba indicates that the percentage of district households drawing water from unclean sources has decreased from 52% to 20%.

This spells a bright future for Zomba and its inhabitants, said D Dr. Mufunanji Magalasi, head of the performing arts department of Chancellor College.

“With the growing numbers of admission at Chancellor College due to increased demand for tertiary education there is a boom of property development around Zomba to provide accommodation for students,” Magalasi said. “Without the Mulunguzi Dam which resolved our water problems, such developments would not have been possible. Maybe even some of the courses we are running may have been directed to other constituent colleges where there was less of water problems.”

The joys of Zomba are expected to be replicated in other towns such as Mangochi, Balaka, Karonga, Salima and Nsanje where water supply schemes are also being constructed.  The major cities of Blantyre, Lilongwe and Mzuzu are also benefitting under the NWDP II with rehabilitation of treatment plants and/or distribution systems. Blantyre will also benefit with designs of a new water source.

Since 2007, the World Bank has committed $175million in NWDP II which is scheduled to close in 2016. The Bank collaborates with several other development partners in supporting the government achieve its goals of safe and clean water coverage by 2025.