Snow leopards are in trouble - and only humans can help.

One of the most exotic and elusive “big cat” species known to mankind, snow leopards are facing extinction due to a variety of factors, but countries are stepping up efforts to protect these animals from poachers, local communities and the effects of changing weather patterns.

Snow leopards are typically two to five feet in length. They are characterized by their powerful build, white-grey coats with large black spots and rings, and long tails. The former helps them blend in with the steep and mountainous terrain in Central Asia, while the latter provides balance and helps them stay warm.

The World Wildlife Fund (WWF) estimates their population to be anywhere between 4,000 and 6,500. But that number is falling fast.

Protecting this rare species entails three main measures -- conserving their ecosystems, saving them from poachers and local communities that kill them to protect their livestock, and helping to offset the effect of climate change and human settlements.

The governments of these 12 countries are trying to do exactly that with a multi-year plan called the Global Snow Leopard Ecosystem Recovery Program (GSLEP), which was initiated in 2012 and is supported by the World Bank Group, Global Environment Facility, and United Nations Development Program, among other organizations.

A global forum hosted by the Kyrgyz Republic in Bishkek with support from the World Bank’s Global Tiger Initiative, aims to outline urgent actions and a new global strategy as part of this plan to conserve snow leopards and their habitat in Central Asia.

These actions are especially important in the Kyrgyz Republic, where only 250 snow leopards are alive today, according to recent estimates.

The 12 countries estimate that the program could cost between $150 and $200 million in the first seven years (2013-2020), though these figures are still preliminary.  The governments will bear much of the expenses, with assistance from international organizations.

Combining efforts across countries to protect snow leopards will also have other positive consequences such as preserving biodiversity, and supporting rural development.

Another big reason for their dwindling population is that they are actively hunted for their body parts, which some cultures believe have great medicinal value. As demand has grown, so has the sophistication of poaching rings.

A big part of the GSLEP strategy will focus on educating rural mountain and herder communities about the need to protect snow leopards, engaging them in conservation efforts, and helping them have sustainable livelihoods, to prevent an overlap in food sources.

The governments will also work with each other to combat poaching and illegal trade networks.

Not least of all, climate change is the most worrying long-term issue threatening snow leopards’ survival. It has led to retreating glaciers, raising the risk of droughts, affecting flora and fauna in the region, and leaving snow leopards -- like other wild animals -- with narrower food options.

The impact of climate change could result in a loss of up to 30 percent of the snow leopard habitat in the Himalayas alone, according to the WWF. 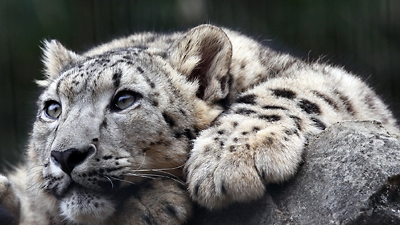