South Asia Region Vice President Philippe Le Houerou was greeted at Amritsar by the Mayor and other government officials when he crossed the border from Pakistan at the Wagah border during his first visit to the region.

As the rain fell gently one end-August afternoon, Philippe Le Houerou crossed no man’s Land to enter India through the Wagah Border Post with Pakistan. Newly appointed vice president (VP) for the South Asia Region (SAR), Le Houerou chose the unconventional way to travel between India and Pakistan for his first visit to the region. As he stepped into India, accompanied by outgoing VP Isabel Guerrero, Le Houerou he was greeted by military salutes, welcoming government officials and a gathered clutch of cameramen. Driving away from Wagah, Le Houereu witnessed a rare border sight in one of the least connected regions of the world – a line of trucks waited to cross into Pakistan bearing loads of onions and cotton, part of the very limited border trade between the two neighbors.

"I was surprised to learn that intra-regional trade in South Asia is as low as 5% of total trade and that the costs of trading across borders is one of the highest in the world,"says Le Houérou, who was until recently the World Bank vice president for Europe and Central Asia. "Shared borders could lead to shared prosperity and we at the Bank are ready to help the countries of South Asia enhance their opportunities for greater trade and resource cooperation." 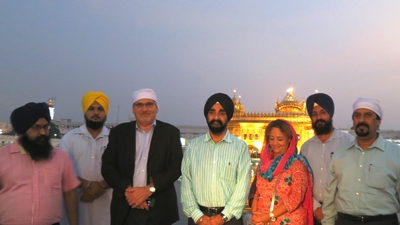 Later that evening Le Houerou visited the magnificent Golden Temple, the holiest shrine for the sikh community. The Golden temple glowed warmly in the falling dusk as the resident priests took Le Houerou for a tour of the gurudwara – as sikh temples are termed – that is visited by close to a hundred thousand faithful each day. Le Houreou was especially fascinated by the complex operation of the community kitchens that feed an average of 80,000 people each day.

The next morning, Le Houérou visited village communities in Amritsar district who are running their own metered water supply schemes under the World Bank-financed Punjab Rural Water Supply and Sanitation Project (Punjab RWSS). Although Punjab is one of India’s most prosperous states, the rural areas face the twin challenges of declining water quality and the lack of household access to clean drinking water. The Punjab RWSS project is helping bring clean drinking water to 840 villages, and 18 villages have already begun to get uninterrupted 24-hour supply.

Le Hourerou also travelled to Uttar Pradesh (UP), India’s most populous state, and also one of its poorest. The World Bank’s new Country Partnership Strategy for India (2013-17) calls for a more intensive engagement with low-income states like UP which continue to face overwhelming development challenges. 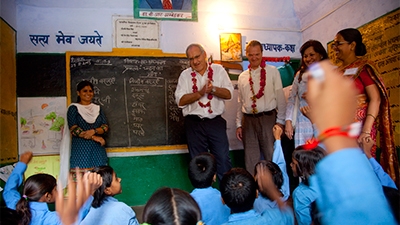 Le Houérou visited a group of pre-school children at an early childhood care center in the district of Agra. He interacted with children and their care-givers to find out more about the nutrition and education interventions being made in an effort to counter the country’s high levels of malnutrition that rob succeeding generations of the ability to lead fully productive lives. He then went to a nearby Kasturba Gandhi Ballika Vidyalaya – a residential school for girls from poor households, often the first generation of girls from their families to get an education. The World Bank is supporting the government of India’s efforts to get all its children, especially girls and children from vulnerable backgrounds into school. Over 20 million out-of-school children have already been enrolled under the government’s flagship Sarva Shiksha Abhiyan (Education for All) program and the focus is now shifting to ensure that children stay in school to receive the benefits of a secondary education. 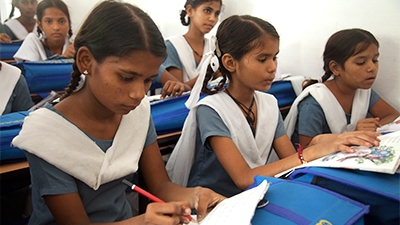 " What I saw first-hand in my field visit is how a sustained effort of a committed team can deliver fantastic results. This is true for the residential school for girls, as it is for the amazing sodic lands reclamation project. Whether we work to fight against poverty by bringing girls from poor communities into schools or by transforming the productivity of the land of poor farmers, in the end it is all about the people who make it happen. "

Braving the monsoon rain, the vice president also met with farmers in Lakhanwala and Hursaina villages who have used technology made available under the World Bank-financed Sodic Lands Reclamation Project to turn their unproductive lands into fertile fields. Farmers told him how their lives had been transformed after their fields were returned to productivity. More than 260,000 hectares of unproductive sodic land in UP have been reclaimed under the project, helping more than 425,000 poor families improve their incomes substantially. 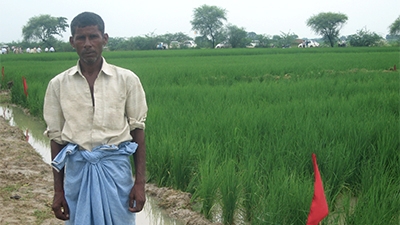 After spending several hours in the field, the vice president was taken on a Heritage Walk through the old town of Agra, an early 16 century Mughal capital where even today, history rubs up against modern urban India and old houses, mosques and temples jostle with informal settlements teeming with large numbers of urban poor. The Heritage Walk ended in one of the greatest sights in the world – the Taj Mahal, where the Mughal emperor Shah Jahan immortalized his love for his queen in the celebrated marble mausoleum. Struck by the magnificent dome and elegant gardens, Le Houreou said "It is clearly one of the most beautiful monuments that I have visited. I’m struck by the dedication and artistry that must have gone into building what is one of the world’s most beautiful structures.”

He also visited the historic Agra Fort along the banks of the river Yamuna, replete with stories of valor, chivalry and betrayal from one of the most colorful periods of the country’s history. As always, juxtaposed by the past were the ever-present challenges of modern India as the rapidly urbanizing country strives to meet the rising aspirations of its billion plus people.

“Visiting villages of Punjab and Uttar Pradesh highlighted to me India’s development gaps. The scale of India’s challenges is immense and the innovative development responses being forged here carry valuable lessons for countries around the world.”

While in Delhi Le Houérou met government officials at various levels and discussed how the pace of implementation of World Bank-financed projects in India could be improved, to ensure quicker and better results for the people for whom these projects were designed.