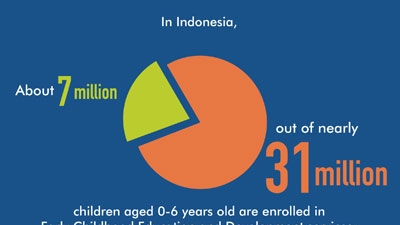 Check out the infographic: Early Childhood Education and Development Matters.

The focus of the study is the impact of a government initiative launched in 2008 that widens access to early childhood services in 3,000 villages across 50 districts.  Every young child has enormous potential, yet poverty and inequality impede the optimal development of many children.

The book outlines research conducted in some 310 villages, involving more than 6,000 children.  The impact of early childhood services on these children and their families is documented by a random sample of villages.  These observations provide insights for anyone who is concerned about early childhood development in Indonesia and beyond.

What the study reveals

Before Early Childhood Services Were Available: Children’s Achievements and Challenges:

Intervening to Make a Difference