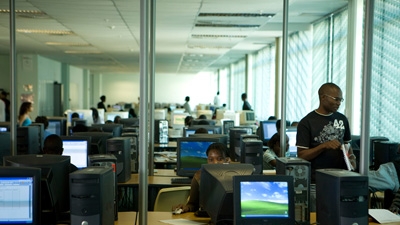 WASHINGTON, July 29, 2013 - The future of education in West Africa is bright. In the last 10 years, many countries have made extraordinary gains. In Senegal, for example, 79% of students are enrolled in primary school, up from only 46% in 1990. Across the sub-region more students are completing primary school, and schools are enrolling more female students than ever before.

To progress from these achievements towards greater individual prosperity and economic growth, countries need to provide higher education that is relevant to current market needs. Private companies continue to invest in booming areas such as mining, construction, engineering, healthcare and agricultural research. This has the potential to transform West African economies, bringing in thousands of jobs for those who have the right education.

Recognizing a need to re-think higher education in Africa, the Association of African Universities (AAU), in partnership with the World Bank, has issued a call for proposals for the establishment of African Centers of Excellence in Science and Technology in higher education. The competition will run until September 2nd, 2013 with further details available on the AAU website.

“The Africa Centers of Excellence project is a key factor for Africa's socioeconomic development because of its potential contribution to the knowledge economy and hence to growth and development,” says Professor Etienne Ehouan Ehile, Secretary General of the Association of African Universities.

The African Centers of Excellence in Higher Education project, which is currently under preparation, aims to strengthen higher education in the fields of agriculture, engineering, health, mining, science and technology across West Africa. The pipeline project aims to help universities develop regional centers in these disciplines, with the goal of consolidating scientific skills and expertise.

The West African sub-region contains more countries than any other region in Africa. Each country has its own university system, and many countries have several reputed public and private universities. However, access to higher education is unevenly distributed. Nigeria, the largest country in the sub-region, has 47 universities, while the Gambia, the smallest country, has only one. Scarce human and financial resources are spread thin throughout the sub-region.

Regional collaboration is essential to tackling regional development challenges and promoting economic growth. No single country has the means to develop expertise in all knowledge areas. Instead universities will work together, pooling resources to develop Centers of Excellence which will share knowledge to serve the region. For example, a Center of Excellence in engineering for the extractive industries would educate students and train faculty from across the region to work in the rapidly expanding mining sector. Partnerships with industry will allow the center to become a pipeline for high quality applicants, benefitting both students from the region and local employers.

For small and conflict-affected states, educational progress has not been nearly as rapid as in the rest of the sub-region. With each passing year, there is a danger that the countries which have the greatest needs in education fall further behind their neighbors.

As part of the proposed African Centers of Excellence program, particular attention will be paid to countries that do not currently have the ability to host a Center of Excellence at their home universities. These countries will be eligible for funding to establish partnerships with existing Centers that include training, faculty exchange, student scholarships and other programs designed to boost the capacity of their home institution. The emphasis will be on the positives gained from fostering regional collaborations in scientific disciplines, and including faculty and students from all states in the larger regional march towards a world class system for higher education.