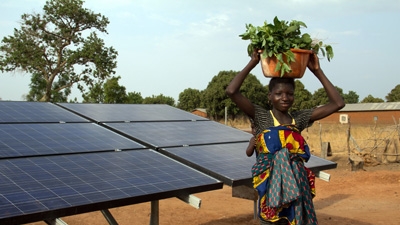 ABUJA, June 10, 2013—As Nigeria preps to become the world’s 20th largest economy, its leaders are looking at ways to lessen the impacts of climate change and grow the country’s economy with a reduced carbon footprint.

In 2012, during the rainy season, flooding killed nearly 400 people, displaced an estimated 3.8 million more, damaged oil production facilities and destroyed homes and businesses. Today, the government, along with its international partners, is taking steps to rebuild, and making climate resiliency and low-carbon growth part of its development plans.

Two new reports from the World Bank, Toward Climate-Resilient Development in Nigeria and Low-Carbon Development Opportunities for Nigeria, examine the many challenges Nigeria faces from potential climate change effects in several sectors, such as agriculture, energy and water management.

In agriculture, which accounts for 40 percent of the country’s GDP and employs 70 percent of Nigeria’s people, higher temperatures and more erratic rainfall could contribute to a long-term 20-30-percent reduction in crop yields, according to the reports. Climate change impacts the production of livestock by reducing feed and increasing thermal stress to animals. Declining domestic yields could lead to a 40 percent increase in rice imports in a country where much of the fast-growing population depends on rice as a staple of its diet.

“Various climate models indicate that average temperatures across Nigeria are expected to rise an average of 1–2°C by 2050 and even more during the winter,” says Raffaello Cervigni, Lead Environmental Economist at the World Bank and author of the two reports. “In this way, climate change is likely to make food, energy, and water security harder for Nigeria to achieve.”

According to Cervigni, these likely impacts will be felt the most by the country’s poorer segments of the population which have less means to adapt and diversify the sources of their livelihoods.

The reports, launching on June 10 in Abuja, propose specific policies, technologies, and other solutions to help Nigeria develop its economy while remaining climate resilient.

Toward Climate-Resilient Development in Nigeria takes a comprehensive look at the potential impacts of climate change on agriculture, livestock, and water resource management.

According to the report, to help protect vulnerable rain-fed crops against the harsher climate of the future, farmers can incorporate sustainable land management practices such as agroforestry—where trees are integrated with crops, animals, or both to provide shade and natural fertilization—and conservation agriculture methods such as low or no tillage, which reduces soil depletion.

These farming practices, the report says, can not only increase yields, but also reduce their fluctuations in the uncertain climate of the future, thereby increasing food and income security for farmers and enhance the ability of people in rural communities to protect themselves against climate change-related impacts.

Low-Carbon Development in Nigeria outlines a low-carbon strategy that would position Nigeria as a regional and international leader on climate action. Adopting a low-carbon strategy in the power sector, for example, including energy efficiency, solar and wind energy; and combined cycle technology in gas-fired generation, could provide the electricity Nigeria needs to grow, but with cost savings in the order of 7%, and avoiding the emission of close to 2 billion tons of CO2..

In the oil and gas industry, a low-carbon strategy that focuses on reducing natural gas flaring and capturing the gas for commercial use (in the power and other sectors) could generate as much as US$7.5 billion in net additional gains.

Overall, this low-carbon scenario could generate net benefits in the order of two percent of GDP over 25 years, according to the report.

While both reports note that low-carbon, climate resilient development is possible and often economically attractive, the approach is by no means easy in Nigeria or elsewhere. A variety of barriers, including lack of information and technology, limited capacity in institutions and lack of financing, stand in the way; thus the need to act now to overcome these barriers and reap the benefits of a development path that will allow Nigeria’s economy to grow--even as the climate changes—and its people to thrive.