Art often reflects the emotions, disillusionment, and hopes of a dynamic society. It reminds people that change is not only possible, but absolutely necessary. A great work of art emerges by taking chances, making choices, and refining the changes that come about … much like a nation’s development.

In Bulgaria, artists are painting a vivid picture of a society with strong ties to its past and great ambitions for its future.

More than twenty contemporary artists from around Bulgaria have come together to display their work at an exhibition in Sofia that has been organized by the World Bank in partnership with the Ministry of Finance and the Ministry of Foreign Affairs, under the patronage of the President of the Republic of Bulgaria. The exhibition is at the occasion of 20+ years of partnership between Bulgaria and the World Bank Group.

The “Chances, Choices, Changes” exhibition includes artworks spanning more than two decades and which have been selected by Marina Galvani, the World Bank art curator, and guest curators Maria Vessileva and Philip Zidarov. The artworks were chosen specifically because they express ideas and emotions that exemplify the pulse of Bulgarian society over the past 20+ years.

" Chances, choices, changes is not a historic reconstruction of events but rather an exciting sample of art created in dramatically different political and social contexts that showcase the vibrancy of the Bulgarian art scene, of the opportunities that are opening for Bulgaria’s most creative thinkers and doers, and the position in the international fabric of contemporary art that these artists rightfully occupy. "

With a rich cultural and artistic tradition, Bulgaria has come a long way in the last two decades. Thanks to sustained reform efforts and European Union membership since 2007, Bulgaria has managed to increase incomes for its citizens, improve transport and infrastructure, and weather the ongoing economic crisis. Nevertheless, in increasingly difficult times, the country continues to face social and economic challenges, in particular the convergence of its living standards with those of other EU member states.

Knowledge is at the heart of development and it is central to the partnership that has been built between Bulgaria and the World Bank Group over the past 20+ years. This partnership puts great emphasis on recognizing the nation’s values and its cultural framework.

The “Chances, Choices, Changes” exhibition gives a space and a voice to Bulgarian artists to remind their fellow-citizens (and external viewers) that while much has already been achieved, there is much more to be done and for that Bulgaria could rely on its most creative thinkers and doers. 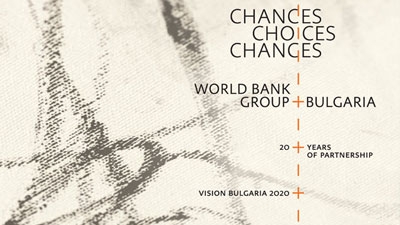