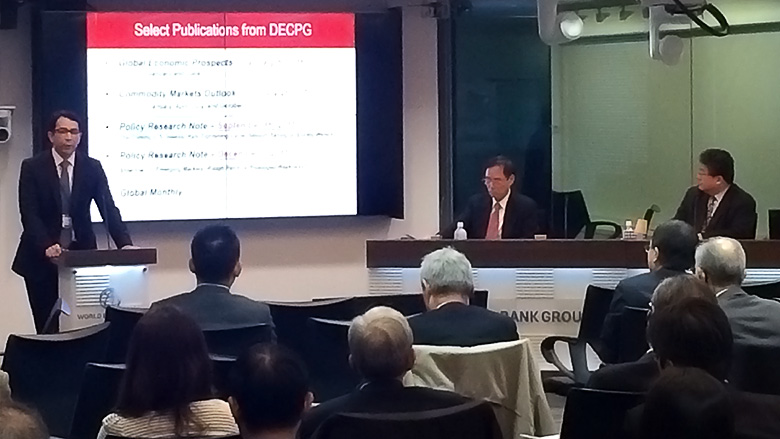 Weak growth among major emerging markets will weigh on global growth in 2016, but economic activity should still pick up modestly to a 2.9 percent pace, from 2.4 percent growth in 2015, as advanced economies gain speed, according to the World Bank’s January 2016 Global Economic Prospects (GEP).

Simultaneous weakness in most major emerging markets is a concern for achieving the goals of poverty reduction and shared prosperity because those countries have been powerful contributors to global growth for the past decade. Spillovers from major emerging markets will constrain growth in developing countries and pose a threat to hard-won gains in raising people out of poverty, the report warns. The recently negotiated Trans-Pacific Partnership could provide a welcome boost to trade, according to the report.

Ayhan Kose is Director of the World Bank Group’s Development Prospects Group. In this capacity, he leads the World Bank Group’s work on global macroeconomic outlook and forecasts as well as financial flows and commodity markets. He also coordinates work related to the monitoring of the World Bank Group’s twin goals of ending poverty and promoting shared prosperity. Under his management, the Development Prospects Group produces the Bank’s flagship reports, Global Economic Prospects and Global Monitoring Report, in addition to other monitoring publications. Prior to joining the World Bank in June 2014, Mr. Kose was Assistant to the Director of the Research Department and Deputy Chief of the Multilateral Surveillance Division in the International Monetary Fund (IMF). In various capacities at the IMF, he served as Co-Chair of the Interdepartmental Taskforce for the 2014 Spillover Report and Mission Chief of the Ex-Post Assessment for the Nicaragua’s 2007-11 IMF Program, and as an economist in multiple divisions of the Research Department, and the United States and Canada desks of the Western Hemisphere Department. Mr. Kose taught at the University of Chicago’s Booth School of Business and INSEAD, and was formerly Assistant Professor at Brandeis International Business School. He has a Ph.D. in economics from the Tippie College of Business of the University of Iowa and a B.S. in industrial engineering from Bilkent University. A native of Turkey, Mr. Kose was born and raised in Istanbul.

Naoyuki Yoshino is Dean of the Asian Development Bank Institute (ADB Institute); professor emeritus of Keio University, in Tokyo, Japan; and senior adviser at the Japan Financial Services Agency’s (FSA) Financial Research Center (FSA Institute). He obtained his PhD from Johns Hopkins University in 1979, where his thesis supervisor was Sir Alan Walters (who was Margaret Thatcher’s economic adviser). He was a visiting scholar at the Massachusetts Institute of Technology (United States) and has been a visiting professor at various universities including the University of New South Wales (Australia), Fondation Nationale des Sciences Politiques (France), and University of Gothenburg (Sweden). He was an assistant professor at the State University of New York at Buffalo and an economics professor at Keio University from 1991 to 2014. He was appointed chair of the Financial Planning Standards Board in 2007, and also served as chairperson of the Japanese Ministry of Finance’s Council on Foreign Exchange and its Fiscal System Council (Fiscal Investment and Loan Program Section). He was also a board member of the Deposit Insurance Corporation of Japan, chairperson of the Meeting of Japanese Government Bond Investors (Ministry of Finance), and was president of the Financial System Council of the Government of Japan. He was conferred honorary doctorates by the University of Gothenburg (Sweden) in 2004 and by Martin Luther University of Halle-Wittenberg (Germany) in 2013; he also received the Fukuzawa Award for his contribution to academic research in 2013.