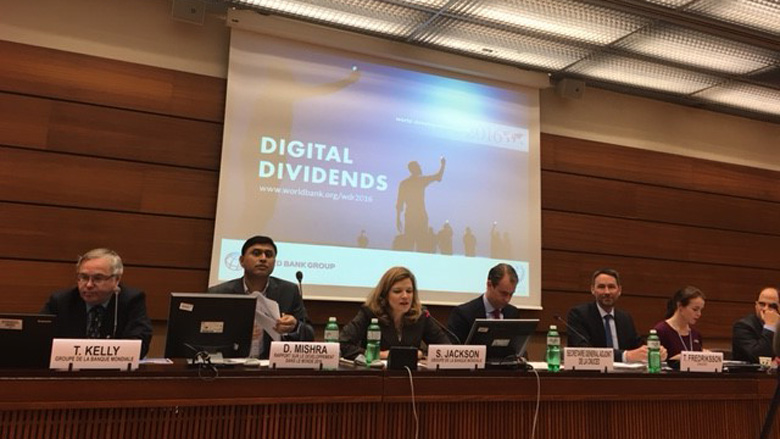 On Monday, February 1, 2016, the World Bank Group Office in Geneva and the United Nations Conference on Trade and Development (UNCTAD) co-hosted a presentation of the “World Development Report 2016: Digital Dividends.” The 2016 World Development Report examines how the internet can be a force for development, especially for the poor in developing countries. The Report documents many profound and transformational effects of digital technologies that are boosting growth, expanding opportunities and improving services. It also finds that the broader benefits have fallen short and are unevenly distributed. For digital technologies to benefit everyone everywhere requires closing the remaining digital divide. But greater digital adoption will not be enough. The WDR 2016 argues that to get the most out of the digital revolution, countries also need to work on the “analog complements” — by strengthening regulations that enable firms to connect and compete, by adapting workers’ skills to the demands of the new economy, and by ensuring that institutions are accountable.

Deputy Secretary-General of UNCTAD Joakim Reiter welcomed and congratulated the WBG on the release of this timely report. He was followed by Deepak Mishra, Co-Director of WDR 2016, WBG as well as Tim Kelly, WBG Lead ICT Policy Specialist, who shared the key messages of the publication, which can be downloaded in full and is available in many different languages. Three experts served as the discussants and provided their views on the role of the WDR 2016, the impact of ITCs and internet on development more broadly, and what their institutions are doing to support the present-day challenges such as increasing the availability of evidence-based policy-making: Phillippa Biggs, Senior Policy Analyst, ITU, was joined by Torbjorn Fredriksson, Chief, ICT Analysis Section, UNCTAD and Michael Kende, Chief Economist, Internet Society.

Moderated by Selina Jackson, Special Representative to the UN and the WTO, WBG Office in Geneva, there was a lively discussion during the Q & A on how connectivity can be beneficial if it is coupled and supported by the “complements” – skills, regulations and institutions. Several Ambassadors were present in the room and shared their views on challenges such as the need to address the “cost” of broadband versus “access;” and the need for governments to use the internet to advance governance and vice-versa. Representatives from foundations, other international and UN agencies, CSOs and think tanks also took the floor to comment on aspects of the report. There was consensus that access to ICTs and internet is still not at a “level playing field” and that each one of us in Geneva has a role to play to advance this cross-cutting issue, especially in the context of the SDGs implementation and the broader 2030 Agenda.

Welcome to the Internet