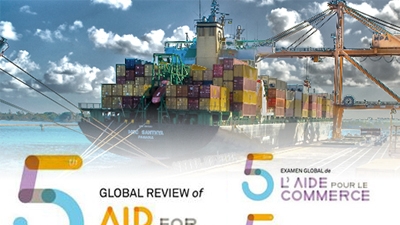 Fifth Global Review of Aid for Trade
June 30-July 02, 2015Geneva, Switzerland
From June 30th to July 2nd trade and development ministers from around the world will join heads of multilateral and development agencies, the private sector and civil society to discuss how the global community can come together to help reduce the costs of global trade in order to help countries achieve sustainable growth that can help lift millions of people out of poverty.

Aid for Trade helps developing countries, and particularly least developed countries, trade. Many developing countries face a range of supply-side and trade-related infrastructure obstacles which constrains their ability to engage in international trade. The Fifth Global Review of Aid for Trade will be held at the World Trade Organization (WTO) from June 30th to July 2nd 2015. The theme of the Review is “Reducing Trade Costs for Inclusive, Sustainable Growth”.

This event will bring together participants from around the world — notably trade and development ministers, other government officials, heads of multilateral and development agencies, representatives of the private sector and civil society — to discuss how to reduce high trade costs, which act as a brake on the integration of many developing countries and least-developed countries (LDCs) into international trade.

The World Bank Group (WBG), which is the largest multilateral provider of aid for trade, will participate in several sessions at this event.

Trade as a percentage of GDP has more than doubled over the last 50 years, with exports of goods and services now accounting for 30 percent of global GDP. At the same time, levels of extreme poverty have declined in part due to a global effort to reduce trade costs and integrate developing countries into the global economy. But high levels of poverty still remain and a sustained effort to further integrate developing countries into the global economy is essential. As countries work toward lifting the remaining billion out of extreme poverty, the constraints faced by the poor will need to be tackled in order to maximize their gains from trade opportunities. A new report, to be launched jointly by the World Bank and WTO, identifies four leading dimensions of poverty that constrain the poor from gaining the full benefits from trade. They are: rural poverty, gender, fragility and conflict, and informality. All four of these dimensions must be part of our approach to unlocking the contribution of trade to growth and poverty reduction.

High trade costs effectively price many developing countries out of global markets, not just with respect to their exports, but also access to imports too. As a result, comparative advantages in merchandise goods may remain unexploited and the economic growth possibilities offered by services' trade are untapped.

Lessons from Natural Disasters and Other Humanitarian Emergencies on the Role of Trade in Relief and Reconstruction
Tuesday, June 30th | 13:30 - 15:00

Recent natural disasters highlight the role that trade can play in both relief and reconstruction – and how the same weak capacity, trade-related infrastructure and supply-side constraints that hamper developing country participation in commercial trade can also hinder relief and reconstruction. For example, the World Bank Group has estimated that Guinea, Liberia and Sierra Leone will lose at least US$1.6 billion in forgone economic growth in 2015 as a result of the Ebola outbreak. Research by the Commonwealth Secretariat has highlighted how the trade effects of this crisis have spread well beyond the three Ebola-affected countries due to land border closures and cargo controls. The session will feature a discussion on these issues with ministerial representatives of recently disaster-affected governments and their international partners, kicked off by a presentation from the World Bank Group on work being conducted in collaboration with the IFRC and others to draw attention to the links between trade and humanitarian emergencies.

This plenary session will examine the issue of trade costs from a sectoral perspective, with a specific focus on the cotton value chain. High trade costs erode the competitiveness of low-income suppliers. Discussions and negotiations at WTO since the “Sectoral Initiative for the Cotton Sector” was submitted in 2003 have highlighted that the cotton sector is a driver of economic growth and poverty reduction in developing countries, and particularly in LDCs. Cotton trade also has a role to play in economic empowerment of women. Research points to a range of issues that drive up transport costs for cotton suppliers, such as transport infrastructure failings, transit regimes and customs documentation issues. The aim of this session is to examine the issue of trade costs for cotton exports, analyze how LDCs can identify priority areas for growth, the barriers they may face in building capacity in these areas, and how to attract the support of development partners and investors to enhance export performance and add value in the cotton chain.

The session raises the awareness of the importance of non-tariff measures (NTMs) for trade costs and sustainable development. Some assessments indicate that NTMs are far more important for trade costs than any other trade control measure. Official NTMs such as laws and regulations and procedural obstacles such as inefficient implementations are distinguished.