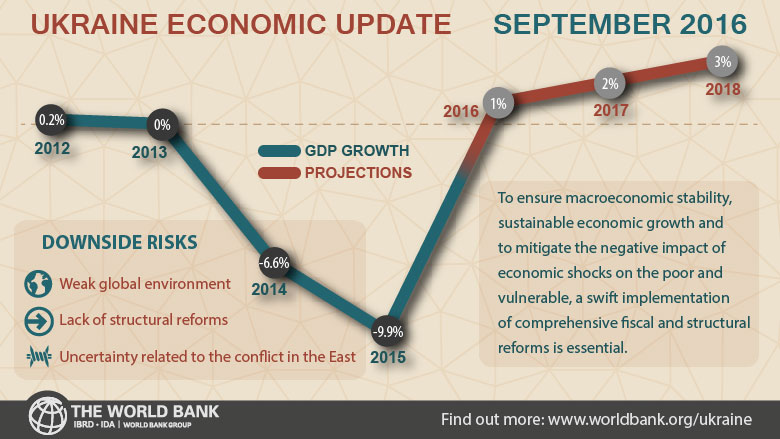 Broad-based recovery and growth have been held back by a number of factors, including weak external demand, the continuing conflict in the East of Ukraine, and limited reform momentum, all of which have held back a strong turnaround in investor confidence and productivity. Although some reforms have advanced in the last few months, a broad-based turnaround in reform momentum has not yet replaced the slowdown in reforms since September 2015.

Poverty is estimated to have increased significantly in 2015 due to declining real wages, while inflation has moderated in the first half of 2016.  Disposable incomes have contracted significantly from the deep recession. Inflation peaked at 43.3 percent at the end of 2015 due to the considerable depreciation of the Hryvnia in 2014-2015.

As a result, real wages were down by 13 percent y/y in December 2015. Households were also impacted by higher energy prices in 2015, although the new means-tested housing utility subsidy program partly mitigated the impact.

While poverty remains elevated, inflation has moderated considerably to 8.3 percent y/y in August 2016 due to stabilization of the exchange rate and lower commodity prices.  This slowdown in inflation is contributing to some recovery in real wages in select sectors, although unemployment edged up to 9.9 percent in the first quarter of 2016.

After a sharp reduction in large fiscal imbalances in 2015, revenues are down and expenditures are up in 2016. The general government deficit, including Naftogaz, was reduced from 10 percent of GDP in 2014 to 2 percent in 2015 due to tight controls on spending, higher than expected inflation, and reduced quasi-fiscal subsidies to the energy sector combined with lower prices of imported gas.

Furthermore, in November 2015, Ukraine successfully restructured about US$19 billion of its public external debt. As a result, despite the large depreciation, overall public and publicly guaranteed debt stabilized at 80 percent of GDP in 2015. However, fiscal pressures have increased in 2016.

On the other hand, expenditures increased by 4.8 percent y/y in real terms in the first half of 2016 due to higher spending on defense, internal order, and social protection. As a result, the general government deficit amounted to UAH 49 billion in the first half of 2016 and was financed by higher net domestic borrowing (which amounted to UAH 33 billion as of end-July) and a drawdown of government deposits.

Imports continued to decline to $22.5 billion from $24 billion over the same period. The current account remained in balance in the first half of 2016, while international reserves reached $14.1 billion (3.6 months of imports) at end-August 2016.

The outlook for economic growth remains weak due to the difficult global economic environment, the ongoing uncertainty related to the conflict in the East, and whether reforms on multiple fronts can be advanced in a complex political environment.

Growth is projected at 1 percent in 2016 and 2 percent in 2017. In the medium term, growth could pick up to 3-4 percent if deeper structural reforms bolster investor confidence and productivity growth. The real depreciation, if coupled with reforms to create a level playing field for the private sector, enhance competition, and tap the EU market, would support exports and tradable sectors.

Reforms to improve expenditure efficiency would create fiscal space to unlock public investment, while continued reforms in the banking sector would permit a gradual resumption of lending.

The outlook is subject to serious risks, including an escalation of the conflict, further deterioration in the external environment, and difficulty to advance reforms in a complex political environment. In light of the gradual economic recovery, poverty is projected to decline gradually and remain elevated through 2018.

The fiscal outlook remains challenging and will require a systematic fiscal consolidation effort grounded in structural reforms.  In light of lower revenues and higher spending, the fiscal deficit, including Naftogaz, is projected at 4 percent of GDP in 2016, with public and publicly guaranteed debt rising further to 90.2 percent of GDP.

Going forward, to maintain macroeconomic stability and gradually reduce public debt, the fiscal framework targets a reduction of the deficit to 2.6 percent of GDP by 2018.

While fiscal consolidation in 2014-15 has drawn on tight spending controls across the board and higher energy tariffs, the consolidation going forward will need to be rooted in deep structural reforms to manage the largest fiscal risks arising from weak tax administration, a narrow tax base, and the large and inadequate pensions system; create fiscal space for more effective public investment; and improve the efficiency and effectiveness of health, education, and social assistance.

External vulnerabilities are expected to persist. Ukraine will require significant external financing to meet repayments of external debt of banks and corporates amounting to about $8 billion per year during 2016-2018.

Further cooperation with the IMF and other official creditors will be important to meet external financing needs, rebuild international reserves, and restore the investor confidence.