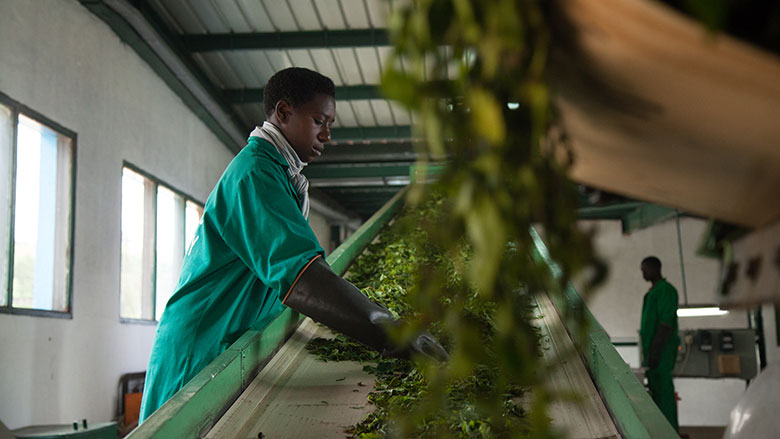 KIGALI, February 26, 2016 – Despite an adverse external environment, Rwanda maintains steady growth, and is one of the few Sub-Saharan Africa countries whose growth rates are expected to exceed global growth rates through 2017, according to the latest economic update.

The ninth Rwanda Economic Update: Rwanda at Work, shows the country has maintained a 6.9% economic growth rate and macroeconomic stability for the first three quarters of 2015, and projects a growth rate of 6.8% in 2016.

“Rwanda’s macroeconomic stability and resulting policy flexibility are good foundations for maintaining steady growth at around 7% percent,” said Yoichiro Ishihara, senior country economist at the World Bank and the task team leader of the report. “However, downside risks have been increasing, externally and domestically.”

The report also examines Rwanda’s employment landscape, as the country is faced with a substantial jobs challenge. To achieve its development goal  of transforming Rwanda into a middle income country with a knowledge-based, private sector-driven economy by 2020, improving employment outcomes for the population is one of the  strategies the government has adopted to drive rapid and sustainable economic growth as well as fast poverty reduction. The Rwanda National Employment Policy targets the creation of 200,000 jobs each year to meet the employment need of the labor force.

The report finds that the past employment dynamics have been  positive, characterized by a move towards non-farm occupations-spearheaded by youth, an uptake of additional jobs, and a strong increase in labor earnings from a low base. The report also identifies challenges, mainly the high and rising incidence of underemployment, signaling a weak demand for labor in the economy. The report also notes that earnings, despite the increase, remain low.

“Rwanda’s working-age population is growing rapidly, and creating sufficient productive jobs for this expanding labor force will be one of the defining challenges for Rwanda over the coming decade,” said Yasser El Gamal, World Bank country manager for Rwanda.

Though the private non-farm sector has been growing and adding many jobs in the past 10 years, most of Rwanda’s workforce - about 70% - remains employed in agriculture, according to the report.

“Further increasing productivity in agriculture remains, for the time being, the most effective way to increase earnings for the bulk of the population,” said Tom Bundervoet, senior poverty economist at the World Bank and co-author of the report.