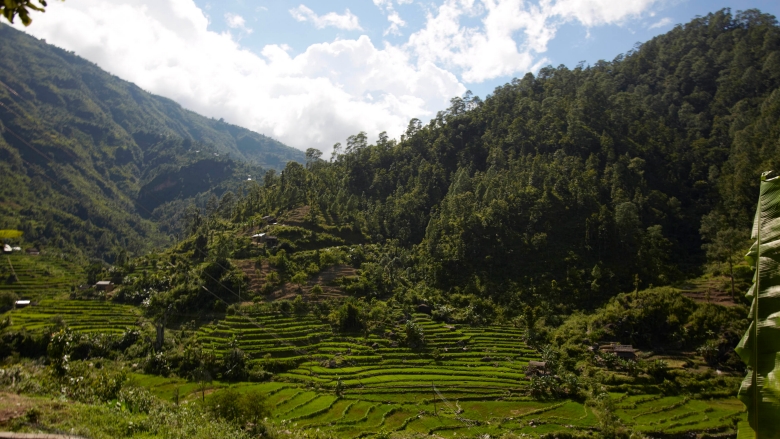 The Bank is working closely with Nepal's other development partners across it's ongoing analytic work and lending portfolio to support local development in areas such as agriculture and roads.

Nepal has been hit by two major shocks in the span of six months. The first one was the massive earthquakes of April and May 2015. The second shock came in the form of a near complete disruption of external trade following the adoption of the new Constitution on September 20, 2015.

Devastating earthquakes in April and May of 2015 took a huge human toll; destroyed homes, businesses, irreplaceable cultural heritage sites and slowed economic growth. The Government of Nepal (GoN), through a Post Disaster Needs Assessment (PDNA), estimated the value of losses at USD 7.1 billion (physical damage of USD 5.2 billion and economic losses, spanning several years, of USD 1.9 billion). In addition, growth is estimated to have slowed to 3.4 percent in FY15, two percentage points lower than a year before, reflecting both weak agricultural season at the start of the fiscal year as well as earthquake-related disruptions.

Furthermore, the earthquake upended Nepal’s remarkable run in poverty reduction. Simulations suggest that the earthquakes could end up pushing an additional 0.7-1.0 million of Nepalis into poverty in FY15-FY16, as the result of the earthquake. This translates to additional 2.5-3.5 percent of Nepalis pushed into poverty. In addition to monetary poverty, the deterioration of water and sanitation services, disruption of schools and health services and the possible increase in food insecurity may lead to a bigger impact on multidimensional poverty, if public services are not restored soon.

Nepal’s political parties intensified their efforts to adopt a new constitution, after eight years of deliberations, spurred on by the shift in political priorities following the 2015 earthquakes. As the constitutional process drew to an unexpectedly rapid close, protests and clashes, some of which turned violent and deadly, erupted in August 2015 across the country’s southern belt bordering with India. Following the promulgation of the new constitution on September 20, 2015, protests intensified, leading to a near-complete disruption in cross-border trade. This resulted in acute shortages of fuel and essential supplies across the country.

With varying intensity, the trade disruptions—which lasted more than four months—have affected economic activity across the board. Industry has been severely affected. The service sector has also been hit hard as tourism, trade, and transport have been disrupted. Agriculture has been affected by lack of fertilizers and other inputs which has already affected summer crops and is likely to have an impact on subsequent harvests. Both government revenues and expenditures have fallen sharply, while shortages of goods have pushed up prices adversely affecting welfare.

Estimating the impact of the trade disruptions in a data-poor and uncertain environment is inherently difficult and imprecise. Based on the data available, and applying a number of different approaches, growth in FY16 is estimated to range anywhere from 1 to 2.3 percent.

" It would have been difficult for my father to send seven children to school. But all of us get free education at our community school. We don’t have to pay any fees. Each of us also get scholarships which are allocated for students of the Dalit community every year. Receiving an annual scholarship means I can buy new school uniforms and books every year. I have many friends in my school who also come from very poor families, but now they have a chance to study. I feel very proud of myself when I go to school. Once I have an education, I can be a proud citizen of this country. Without an education we are like blind men. But once we get an education, no one can take that away from us. "

Beyond the immediate challenge of overcoming the twin shocks, Nepal faces several simultaneous challenges ahead—effective implementation of post-earthquake recovery coupled with a completion of political transition and setting up of a new federal structure. The country also faces the challenge of successfully leveraging its endowments – such as hydropower potential and human capital – to achieve faster growth, increased poverty reduction and economic opportunities, especially jobs, for its citizens at home. Additionally, the trade disruptions have highlighted the need to urgently diversify the Nepalese economy, particularly in terms of trade, transport options and supplies of key resources.

Nepal will continue to benefit from the full range of the Bank Group’s operational and analytical instruments including investment lending, additional financing, technical assistance. Going forward a concerted effort will be made to achieve larger transformational interventions while leaving open the space for smaller innovative projects.

Nepal has made significant progress in enhancing gender equality and women’s empowerment.

Following the 2015 earthquakes, the World Bank Group pledged a financial package of up to US$ 500 million in reconstruction assistance.  Of that amount, US$ 200 million was committed for the Earthquake Housing Reconstruction Project (EHRP) which is the largest sector in reconstruction needs, in excess of US$ 1.2 billion.  US$ 50 million was provided as an injection of cash into the government’s budget to support earthquake recovery.  Another US$ 50 million is allocated for the roads sector and will be approved in May.  US$ 2 million has been provided to carry out structural integrity and damage assessment of public schools.  In addition, 12 ongoing projects have reallocated funds or extended their durations to meet immediate reconstruction needs.

As of March 31, 2016, the World Bank’s concessional credit and grant program to Nepal consisted of 23 active projects with net commitments of USD 1,751.81 million.  Nepal’s IDA-17 envelope is about US$821 million, of which about US$311 million has been committed to date. This excludes the additional IDA Crisis Response Window of US$300 million, of which US$ 250 million has already been committed to the Earthquake Housing Reconstruction Project (US$200 million) and the Second Financial Sector Development Policy Credit (US$ 50 million). The regular IDA lending pipeline for the remainder of FY16 consists of an investment project in the health sector (up to US$150 million) and a financial sector Development Policy Credit (US$50-100 million). The FY17 pipeline is expected to absorb the remaining balance of Nepal’s IDA-17 envelope (US$260 million).

Trust Funds (TFs) have become an important supplement to the Nepal IDA program. Most Trust Funds are well integrated in the country program through AAA, co-financed operations and capacity building activities. The current TF portfolio consists of a total commitment amount of over US$93 million and most major operations are aligned with the core program. Major TFs include the Education for all Fast Track Initiative supporting the School Sector Reform Program, the Global Facility for Disaster Reduction and Recovery, the Safe Schools Initiative, the Global Agriculture and Food Security Program, the Pilot Program for Climate Resilience, a multi-donor financed Public Financial Management TF, the State and Peace Building Fund, the Japan Social Development Fund, and a few others. 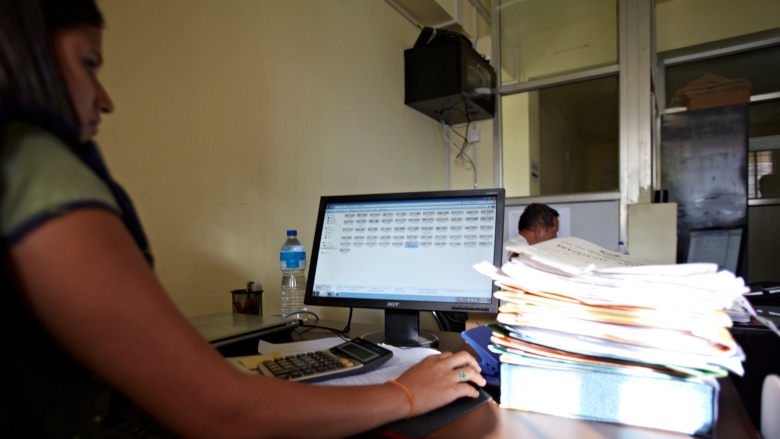 Longstanding partnerships with the Asian Development Bank, the UN agencies and bilateral partners have demonstrated good development results, especially in the health and education sectors. There is strong convergence among Nepal’s development partners on supporting measures to improve governance and accountability. A Multi Donor Trust Fund on Public Financial Management, currently under implementation, is a key vehicle to further this goal. Across the Bank’s ongoing analytic work and its lending portfolio, there are a range of examples including in agriculture and roads where the Bank is working closely with Nepal’s other development partners.

The aid effectiveness agenda in Nepal is driven by the Local Donor Meeting that serves as the main forum for regular dialogue and coordination between donors and government on development policy issues. The meeting is chaired by the Ministry of Finance and co-chaired by a Development Partner. In addition, the annual Nepal Portfolio Performance Review provides another important mechanism to discuss cross-cutting implementation issues and bottlenecks for development programs. IDA will continue to participate in the annual NPPR process, and support the government‘s efforts to transform this mechanism into a broader aid effectiveness tool for all donors. Among donors, the International Development Partners Group (IDPG) provides a bimonthly forum for information sharing, coordination and dialogue on common issues of concern. It is co-chaired by the World Bank.

Accomplishing higher, inclusive growth in Nepal’s formidable terrain will require massive assistance to improve infrastructure access, along with efforts to address governance challenges in the public sector and a more competitive and transparent investment regime for the private sector. The Bank Group will help contribute to growth, productivity and connectivity especially to enhance rural access, and also support efforts to meet challenges of growing urbanization.

Building on the strong results in health and education, especially on female education, improving the delivery and reach of social services will require a sharper attention to vulnerable populations. Bank assistance will pursue a healthy and skilled labor force that enhances Nepal’s efforts to promote local and foreign investments and compete for skilled jobs in international markets.

To meet its objectives of an inclusive and just Nepal, the country will require delivery of services to be responsive and accountable to its citizenry, especially those vulnerable to social, ethnic and gender biases. With a historically strong tradition of community organizations and cooperatives, the citizens of Nepal are ready to benefit from tools and practices of social accountability promoted by the Bank in order to be able to demand and monitor the services they require.

Vulnerability to adverse natural events and a multi-ethnic population present a unique set of development challenges and associated opportunities in Nepal. While poverty has sharply dropped, historic inequalities remain. In addition, Nepal ranks among the most exposed to natural disasters, including earthquakes and flooding, further exacerbated by the impacts of climate change.