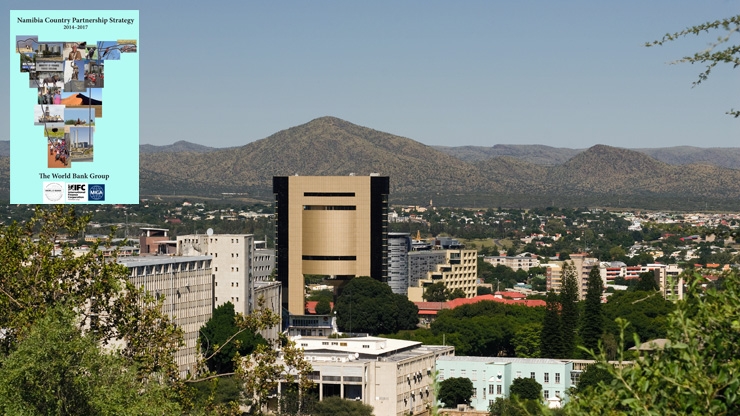 WASHINGTON, July 25, 2013 – Improving state capacity and developing the private sector are two key pillars of the World Bank Group’s new proposed plan of engagement with the Government of Namibia from 2013 to 2017, as contained in the country’s first Country Partnership Strategy (CPS) launched earlier this week.

Developed through extensive consultation with the Government of Namibia, private sector and civil society stakeholders, this strategy responds to Namibia’s developmental challenges. It is anchored in Namibia’s Fourth Development Plan, which focuses on promoting economic growth, creating jobs, and reducing inequality and is aligned with World Bank Group’s two strategic goals to reduce poverty and promote shared prosperity.

“What we are trying to do with this strategy is to work with the Government of Namibia to help it implement its own policies more effectively and to better monitor and track its programs so as to improve the delivery of services,” said Asad Alam, World Bank Country Director for Namibia.

Namibia boasts of an enviable record of political stability, prudent macroeconomic policies, growth and natural resource conservation. Poverty has declined substantially since Independence, with the share of the population living below the national poverty line falling by more than a half between 1993 and 2010. The share of the people living on US$1.25 per day dropped to 21% in 2010 from 49% in 1993.

The country, however, continues to face daunting development challenges, some due in part to the legacies of apartheid and colonialism and to the country’s geographic location. The distribution of income, wealth and skills is highly uneven and the prevalence of HIV/AIDS and tuberculosis is among the highest in the world.

Furthermore, many sources of Namibia’s economic growth currently rely on the country’s fragile desert and marine ecosystems, making the economy vulnerable to global climate change. Unemployment rates have remained high since before independence, despite consistent economic growth, because the economic structure has not generated jobs, especially for unskilled workers.

Analysis given in the CPS suggests that moving to a new trajectory of job creating growth would require the government to pursue more nimble public policies and improve its service delivery, supported by enhanced state capacity and private sector growth.

Under the pillar of enhancing state capacity, the CPS proposes support in four areas:

Under the pillar of developing the private sector, the CPS proposes support in two areas:

The strategy is largely based on technical cooperation, with the Bank Group bringing the best of global experience to help find development solutions for Namibia and promoting peer learning. The group’s International Finance Corporation (IFC) and Multilateral Investment Guarantee Agency (MIGA) will enhance their focus and try to catalyze private sector investment to support job creation.

Namibia joined the International Bank for Reconstruction and Development (IBRD), IFC and MIGA at its independence in 1990. Support to Namibia has since then primarily taken the form of research, policy analysis, technical assistance and capacity building, rather than loans or other financial services. To date, the World Bank has provided loans of US$15 million to the Government (all of which has been fully repaid), grants of over US$16 million primarily through the Global Environmental Facility, and almost US$40 million by the IFC in investments in the private sector.