Growth in the Kyrgyz Republic slowed significantly in 2014, reflecting the deteriorating external environment and supply-side constraints; real GDP growth fell to 3.6 percent, from 10.9 percent in the previous year.

Re-export businesses were affected as the Eurasian Economic Union (EEU) began to exercise stricter border control on goods imported from third countries. Lower production at the Kumtor gold mine and a poor harvest due to adverse weather also depressed growth.

Job creation was stagnant. Poverty remains high: the most recent (2013) national estimates are absolute poverty at 37 percent and extreme poverty at 2.8 percent.

While export growth was negative (–6.4 percent), imports declined even more (–7.2 percent) which, together with lower income outflows, led to a lower current account deficit at 13.7 percent of GDP, down from 15 percent in 2013.

On the fiscal side, slower growth affected tax revenues, which essentially remained flat at 25.3 percent of GDP in 2014 as a year earlier, but non-tax revenues went up by over a percentage point of GDP, to 6.7; together with grants, that brought total revenues to just under 35 percent of GDP.

At the same time, while current spending slightly declined as a share of GDP, a significant expansion of public investment spending brought the fiscal deficit to an estimated 4.1 percent of GDP in 2014, up from 3.9 percent in 2013.

Higher spending and the depreciation of the som translated into a significant increase in public debt, from 46.1 percent of GDP in 2013 to 53 percent for 2014.

Assuming that external demand for Kyrgyz goods and labor recovers, growth is expected to pick up to 4 percent in 2017.

However, the risks to this outlook are significant. A protracted slowdown in Russia and in the region will reduce remittances and put further pressures on the exchange rate and prices.

Domestically, political institutions that are still evolving may limit the ability of the government to implement reforms. The parliamentary elections in October 2015 might also delay some reforms. Taken together, these factors may cloud the growth outlook and jeopardize poverty reduction gains. 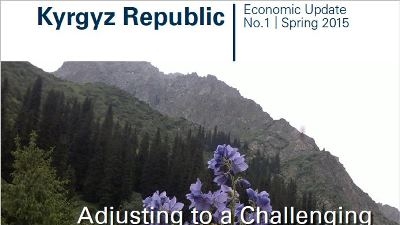