World Bank and Education in Indonesia

The Indonesian school system is immense and diverse. With over 50 million students and 2.6 million teachers in more than 250,000 schools, it is the third largest education system in the Asia region and the fourth largest in the world (behind only China, India and the United States). Two ministries are responsible for managing the education system, with 84 percent of schools under the Ministry of National Education (MoNE) and the remaining 16 percent under the Ministry of Religious Affairs (MoRA). Private schools play an important role. While only 7 percent of primary schools are private, the shares increase to 56 percent in junior secondary and 67 percent in senior secondary.

Education is central to the Indonesian Government’s development agenda. Education spending has increased significantly in the years since the economic crisis. In real terms, education spending doubled between 2000 and 2006. In 2007, spending on education was more than for any other sector, reaching an equivalent US$14 billion equivalent, or more than 16 percent of total government expenditure. As a share of GDP (3.4 percent) this is comparable to other similar countries.

The Law on National Education (No.20/2003) and the Constitution Amendment III emphasize that all Indonesian citizens have the right to education; that the Government has an obligation to finance basic education without charging fees; and that the Government is mandated to allocate 20% of its expenditure on education. The Teacher Law (No. 14/2005) introduced important changes to the employment conditions and requirements for the certification of teachers, aiming at improving education quality. The Ministry of Education’s strategic plan for 2005-2009 has three main pillars:

3. Better governance of the education sector.

In 2005 the Government launched a massive program called BOS (Biaya Operasional Sekolah, or School Operations Fund), as a way of injecting funds directly into schools in order to keep children in school and give schools some flexibility in managing their own funds. Supporting this and the decentralization effort in general, the Government has moved to anchor the principles of School-Based Management (SBM) in the national education system and also to provide a framework of National Standards for Education.

The education team at the World Bank focuses on supporting the Ministry of National Education’s Strategic Plan (RENSTRA)
Starting with the 2005-2009 RENSTRA, the Bank has developed a broad portfolio of support to the key programs identified by the Ministry as needing additional support. The Thematic Education Dialogue led by Bappenas (a forum for Government and development partners to discuss sector issues at a policy level) provides a steer to the Bank and development partners on areas of focus for future support. It is currently leading an Education Sector Assessment which will provide the analytical base for strategic decisions on directions for the 2010-2014 RENSTRA, which development partners will use as a frame for future support.

The World Bank’s program will effectively bridge the 2005-9 and 2010 RENSTRA programs with its ongoing and pipeline portfolio of investment loans, Trust Funds, and analytical work on behalf of the Ministry, providing comprehensive support to the work of the Directorates General in the areas of teacher quality, basic education, higher education, and early childhood development.

The Education Cluster project portfolio comprises projects in Early Childhood, Basic, Higher, and Non-Formal Education. In addition, a youth training project and a sector wide initiative is currently in the pipeline. More than US$ 830 million is committed to the Government of Indonesia for Education by the IDA and IBRD. Total project costs of active and pipeline projects exceed US$ 1.5 billion. Furthermore, there are large Trust Funds that bolster the lending program.

Although Indonesia has recovered well from the economic crisis of the late 90’s, the country continues to under-perform neighboring countries in terms of access to quality education services. The focus of efforts now is on the quality of institutions and public expenditures. Key challenges include: 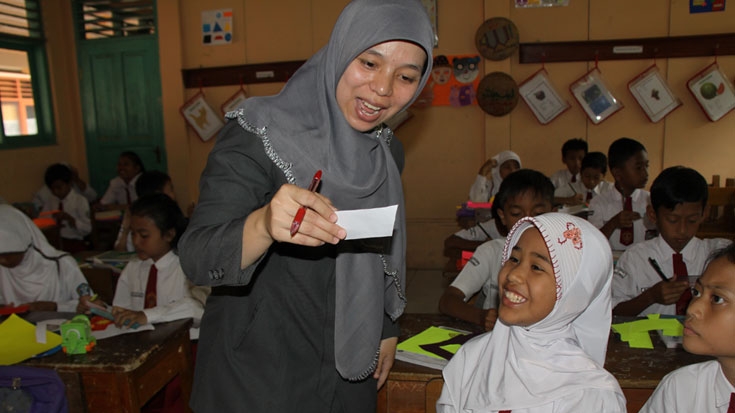 Finding work for a fresh graduate in Indonesia