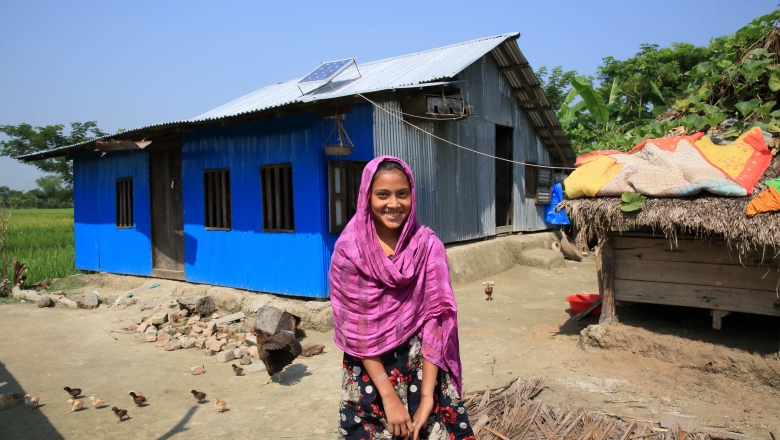 Climate change is likely to increase the frequency and severity of cyclones and other natural disasters. It is essential for Bangladesh to adapt to increased uncertainty and prepare to ride out most severe of storms. The Multipurpose Disaster Shelter Project (MDSP) will reduce the vulnerability of nearly 14 million coastal people to natural disasters.

java.lang.StringIndexOutOfBoundsException: begin -1, end 1654, length 1988
"The changing climate is making lives more difficult for vulnerable communities such as mine. We shall need to work harder to adapt. But whenever I hear of a new shelter being built or an existing one being repaired, I know that there is still hope for our villages and for our families."
Hasina Begum
Headmistress of Paschim Napitkhali Primary School in Barguna
java.lang.StringIndexOutOfBoundsException: begin -1, end 1050, length 8339

The $400 million Coastal Embankment Improvement Project (CEIP), has since 2013 helped Bangladesh to mitigate some of the large impacts from cyclones and flooding and improved emergency response in the coastal region. The project supports the rehabilitation and upgrading of protection polders to protect the areas from tidal flooding and frequent storm surges and includes as well improvements of agricultural production by reducing saline water intrusion in selected polders. Further, the project aims to enhance the Government of Bangladesh’s capacity to respond more efficiently and effectively to natural disasters. The project aims to rehabilitate in total 17 polders in six coastal districts which will provide direct protection to the 760,000 people living within the polder boundaries and enhance the resilience of the coastal areas to cyclones, tidal and floods and salinity intrusion. This in turn will enhance people’s livelihoods through increased agricultural production during normal weather and reduced loss of life, assets, crops and livestock in the event of a disaster.

The $375 million Multipurpose Disaster Shelter Project (MDSP) is a World Bank-led disaster risk mitigation infrastructure project to strengthen emergency preparedness and to reduce the vulnerability of the coastal population in selected coastal districts of Bangladesh to climate chance and natural disasters. The project supports the reconstruction and improvement of multipurpose shelters and builds on initial phases of interventions in multipurpose disaster shelters advanced under the Emergency 2007 Cyclone Recovery and Restoration Project (ECRRP). The activities focus on financing of around 556 new shelters, rehabilitation of around 450 existing shelters, and the construction and improvement of around 550 kilometers of rural roads to improve access and communication networks to shelters. The project is expected to benefit nearly 14 million people living in the nine coastal districts of Bangladesh by improving access to safe havens in the event of a natural disaster. This would serve to build the resilience of local communities to such natural calamities, and help to speed recovery by protecting critical assets. In addition, the project aims to construct multipurpose buildings, especially primary schools.

The $173 million Urban Resilience Project (URP) was initiated to strengthen the capacity of the Government of Bangladesh agencies to respond to emergency events and to strengthen systems to reduce the vulnerability of future building construction to disasters in Dhaka and Sylhet. The project seeks to create an enabling environment for coordinated, locally managed disaster risk management based on three core pillars of disaster resilience in an urban setting: i) effectively respond to urban disasters; ii) reinforce existing infrastructure; and iii) ensure resilient construction. In this context, the project will support to reinforce the emergency management response capacity, facilitating 68 wards with decentralized emergency response services in Dhaka and respectively 20 wards in Sylhet. Project activities also include a vulnerability assessment of critical and essential facilities in Dhaka, Sylhet and other cities that is needed for informed longer-term investments reduce risk in the built environment. The project will as well support institutional infrastructure and capacity building to reduce long-term disaster vulnerability in Dhaka, through improved construction, urban planning and development.

Following Cyclone Sidr in 2007 and Aila in 2009, the $356.82 million Emergency 2007 Cyclone Recovery and Restoration Project (ECRRP) supports the Government of Bangladesh efforts to facilitate recovery from the damage to livelihoods and infrastructure caused by the Cyclone and aims to build long-term preparedness through strengthened disaster risk reduction and management. The project intends to restore the agriculture sector in Sidr/Aila-affected areas, improve existing multipurpose shelters and construct new shelters, support the rehabilitation of around 502 km of coastal embankments and to strengthen the capacity of the government’s disaster risk reduction management. Further, it included support to the government in coordinating all project-related activities, strategic studies for the preparation of future operations for the long-term disaster risk reduction program, and technical assistance and training, as well as providing emergency support for future disasters.

Since 2016, the World Bank seeks to strengthen Bangladesh’s capacity to deliver reliable weather, water, and climate information services and improve access to such services by priority sectors and communities through the $113 million Weather and Climate Services Regional Project for Bangladesh. The project includes improvements in forecasting of weather patterns and extreme events, development and provision of agromet information services to farmer groups and plans to enhance access to early warnings for significant weather and water hazards by vulnerable communities. Through investments in monitoring systems, forecasting and services, the project will contribute to strengthening disaster preparedness and climate resilience in Bangladesh and also contributes to the development of weather based information services that are expected to support decision-making in key productive sectors in the country.