The Welfare of Syrian Refugees: Evidence from Jordan and Lebanon 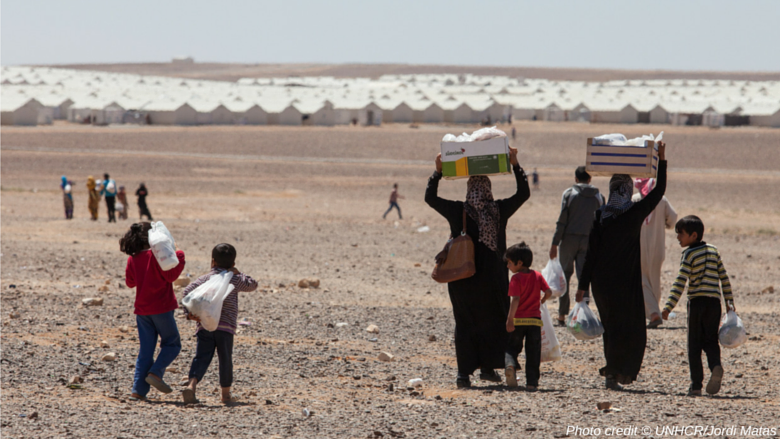 Since the Syrian crisis began, nearly 1.7 million people have fled to neighboring Jordan and Lebanon. To better understand the profile and welfare of Syrian refugees living in Jordan and Lebanon, the World Bank Group and the United Nations High Commissioner for Refugees (UNHCR) have worked closely together to produce The Welfare of Syrian Refugees: Evidence from Jordan and Lebanon (Executive Summary in English, French, and Arabic). The report explores the socio-economic profile, poverty, and vulnerability of refugees, evaluates current policies and discusses prospects for policy reforms.

Prior to becoming refugees, many had suffered repeated shocks within Syria, leading them eventually to abandon their assets, property and capital to seek safety in the neighboring countries. Compared with pre-crisis Syria, the Syrian refugee population living in Jordan and Lebanon is younger (81 percent are under age 35, compared with 73 percent); comprises a higher share of children aged 0–4 (close to 20 percent versus 11 percent); and tends to be single (over 60 percent versus 40 percent).

Given their low levels of education and low enrollment rates in public schools (less than half), school-aged Syrian refugee children are especially at risk.

In 2014, seven in ten registered Syrian refugees living in Jordan and Lebanon could be considered poor, based on the UNHCR’s assistance threshold. This number increases to nine in ten refugees if the poverty lines used by the respective host countries are considered.

Family size and housing are often the best predictors of poverty. In Jordan, for example, the poverty rate almost doubles if the size of the family goes from one to two members and increases by 17 percent from one to two children. Families renting or owning property and living in an apartment or house made of concrete with piped water or a proper latrine are less poor.

Refugees are highly vulnerable, with a vast majority either poor today or expected to be poor in the near future.

Although many Syrians are registered as refugees with the UNHCR and the authorities, they have few legal rights. While they are able to access public services, the availability of these services is severely constrained due to increased demand. Only a minority are housed in refugee camps where most of their essential material needs are met and financed by the international community.

Current refugee assistance programs are very effective in reducing poverty, but are not sustainable and cannot foster a transition from dependence to self-reliance. For example, if administered to all refugees, the UNHCR cash assistance program and the World Food Programme (WFP) food voucher program can each cut poverty by half. These programs can also reduce poverty to less than ten percent if administered jointly and universally. However, they rely entirely on voluntary contributions and when funding declines, only the most vulnerable refugees benefit.

Social protection on its own does not foster a transition to work and self-reliance if access to labor markets and economic opportunities are not available. The focus must shift beyond social protection for refugees to include economic growth in the areas hosting them so that refugees and local communities can share in economic progress. This will require continued close collaboration between humanitarian and development agencies and international partners in order to transform a humanitarian crisis into a development opportunity for all.