While extreme poverty is going down around the world, it is increasing in countries affected by fragility, conflict and violence (FCV). It’s estimated that by 2030, up to two thirds of the world’s extreme poor will live in these situations.  These challenges threaten to reverse efforts to end extreme poverty, and they affect both low- and middle-income countries.

The impacts on people and economies are stark. Violent conflict has spiked dramatically since 2010 -- conflicts now drive 80% of all humanitarian needs and reduce gross domestic product (GDP) growth by two percentage points per year, on average. Social and economic exclusion, climate change, gender and other inequalities, demographic challenges, illicit financial flows and other global trends contribute to this complexity. FCV challenges do not respect country borders and often spiral into multidimensional, regional or global crises.

This surge in violent conflict has also led to historically high levels of forced displacement. Of the 82.4 million people who are forcibly displaced  from their homes to escape violence, conflict and persecution, more than 26 million are refugees, the highest number recorded. Around 85% of these refugees are hosted by developing countries, and 76% of them are still displaced after five years. Such long displacements can have a devastating toll on generations of refugees and deeply impact host communities.

Against this background, the COVID-19 pandemic adds even greater stress, threatening to reverse decades of advancements in poverty reduction and development:

The World Bank was founded after World War II to support post-conflict reconstruction in Europe. It has since evolved to address challenges before, during and after crises. The 2020 World Bank Group (WBG) strategy for FCV, which applies to its work in low-and-middle income countries, articulates a development approach to FCV which emphasizes:

In the context of the COVID-19 crisis, our support needs to focus on the most vulnerable – and this includes fragile and conflict-affected settings, and displaced populations. This support is focused on preventing, detecting and responding to the threat posed by COVID-19, and strengthening national systems for public health preparedness. Nearly one third of the World Bank’s projects to fight the pandemic are in fragile and conflict-affected situations.

Strong collaboration with humanitarian, development, peace and security partners is also critical to delivering results in these challenging environments.

This enhanced focus on FCV is also reflected in IDA, the World Bank’s fund for low-income countries. The latest  IDA19 financing package includes $26 billion in support for FCV-affected countries—a 27 percent increase from IDA18, which had already doubled financing available for FCV. These will support the priorities outlined in the FCV strategy. In addition, $2.2 billion will be dedicated to support refugees and host communities. Other IDA financing is also available to catalyze investments in the private sector, tackle regional fragility challenges and invest in crisis preparedness and response.  All support is intended to tackle the medium-term economic and social dimensions of crisis situations. 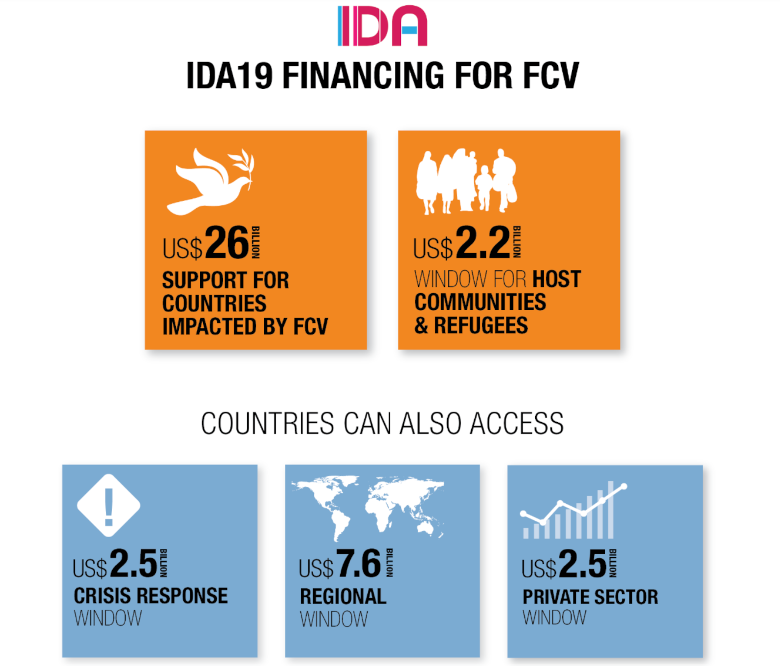 The 2018 World Bank Capital Increase emphasizes support to middle income countries impacted by FCV challenges. In addition, the World Bank’s Global Concessional Financing Facility (GCFF) provides concessional financing to middle income countries hosting large numbers of refugees. Launched in 2016 by the Bank, the UN, and the Islamic Development Bank, the GCFF has provided more than $671 million in grants to unlock almost $5 billion in concessional financing for Jordan and Lebanon to help address the influx of Syrian refugees, as well as for Colombia and Ecuador to help address the needs of more than 1.2 million displaced Venezuelans and their host communities.

Tackling fragility, conflict, and violence requires a collective global effort.  Partnerships based on the respective complementarities and comparative advantages of each partner are crucial to address the causes and impacts of FCV. The WBG is working with a diverse/broad set of partners and is committed to deepening partnerships with humanitarian, development, peacebuilding, security, and private sector actors to maximize impact on the ground.

The WBG partners at the country level by drawing on its comparative advantage as a development actor, enhancing the impact of operations on the ground in insecure areas, and ensuring effective implementation arrangements with third parties as needed. Some examples include:

Examples of multi-stakeholder collaboration include:

The role of the private sector: IFC and MIGA

Only 1% of global foreign direct investment (FDI) goes to fragile and conflict-affected situations (FCS) countries. This means lower prospects for private sector-led growth needed to lift people out of poverty. In addition, in countries affected by FCV, a vibrant and inclusive local private sector can ignite economic growth, provide jobs and services, and stabilize societies. Recognizing that the private sector lies at the center of a sustained development in FCV, the International Finance Corporation (IFC) and the Multilateral Investment Guarantee Agency (MIGA) are significantly expanding their efforts in this area.

Supporting stability and growth in fragile situations is a top priority for IFC. Fragile- and conflict-affected economies need investments that will create jobs, spur economic growth, generate tax revenues, rebuild infrastructure, and create hope for their people. While every fragile situation has a unique and complex set of issues and the risks are high, there are ways for the private sector to help boost economic growth or support livelihoods.

IFC has more than doubled its investments in fragile situations during the last decade and has committed to 40% of IFC’s annual commitments be in IDA and FCS countries by 2030, with 15-20%  going to IDA-eligible countries classified as very low income and FCS.

From 2017 to 2021, IFC invested US$8.4 billion in countries classified as fragile and conflict-affected and very low income. IFC and the World Bank have also created initiatives specifically designed to support fragile situations. IFC has strengthened engagement in FCS through the Conflict-Affected States in Africa (CASA) and FCS Africa initiatives, and advisory support through the Creating Markets Advisory Window (CMAW).

IFC is also working in partnership with the World Bank, UNHCR, and others to identify private-sector solutions and opportunities for refugees and their host communities through creating jobs to boost access to finance and entrepreneurship; improving the delivery of basic services like education and energy; encouraging business-friendly policies in refugee-hosting areas; and sharing lessons learned while deepening partnerships.

In recent decades, foreign direct investment into developing countries has contributed to lifting billions of people out of extreme poverty. But investment often doesn’t flow into countries affected by fragility, conflict, and violence. These ‘FCV’ countries struggle to attract foreign capital because investors fear the worst: civil war, expropriation of assets, breach of contract, and currency restrictions.

Since 1988, the Multilateral Investment Guarantee Agency, a member of the World Bank Group, has been insuring investors against such risks. As of June 30, 2021, 12% of MIGA’s gross guarantee portfolio, or $2.7 billion, was in FCV countries.

A Look Around the Globe: World Bank Support for Fragile and Conflict-Affected Settings