Policymakers and investors often wonder whether the PV power potential in a specific country or region is good enough to take advantage of and if so, on what scale.

Until now, a global and harmonized assessment of country-level PV potential has not existed. A new World Bank report – “Solar Photovoltaic Power Potential by Country” – attempts to fill this gap by evaluating the theoretical potential (the general solar resource), the practical potential (accounting for additional factors affecting PV conversion efficiency and basic land use constraints), and the economic potential of PV power generation, considering a simplified evaluation of electricity production costs.

The data make it possible to evaluate or compare virtually any site, region, or country. Perhaps surprisingly, the difference in average practical potential between countries with the highest potential (e.g. Namibia) and the lowest (e.g. Ireland) is slightly less than a factor of two. In total, 93% of the global population lives in countries that have an average daily solar PV potential between 3.0 and 5.0 kWh/kWp. Around 70 countries boast excellent conditions for solar PV, where average daily output exceeds 4.5 kilowatt hours per installed kilowatt of capacity (kWh/kWp) – enough to boil around 25 liters of water. Countries in the Middle East, North Africa, and Sub-Saharan Africa regions dominate this category, accompanied by Afghanistan, Argentina, Australia, Chile, Iran, Mexico, Mongolia, Pakistan, Peru, and many nations of the Pacific and Atlantic islands.

In total, 86% of the global population lives in 150 countries where the difference between the maximum and the minimum output between different seasons is below a factor of two, and average daily output is above 3.5 kWh/kWp.

Alongside solar resource, the potential for growth in the solar industry is determined by electricity needs; supportive or restrictive policies; costs and payback time; weather-related risks; stability of electricity grids; predictability of solar power supply; interconnection of grids enabling transmission and distribution; and other technical, social, and economic factors. Hence solar PV may still be economically attractive in countries with relatively low solar resource potential due to the prevalence of high electricity prices, or a high daytime peak load from industry or air conditioning.

This report aims to provide findings for high-level comparisons between countries and regions on their solar energy potential and is intended to raise awareness, stimulate investment interest, and inform public debate.

In Ethiopia just 0.005% of the country’s land area could generate sufficient power to cover existing needs, and in Mexico that figure is just 0.1%.

The World Bank is committed to supporting such countries in harnessing the opportunity for low-cost, clean solar power in a way that supports economic development and job creation – for example through the Energy Sector Management Assistance Program’s Solar Risk Mitigation Initiative. Our support extends from the expansion of markets for distribution of solar home systems through our Lighting Global initiative, to establishment of Green Mini-Grids, to investment in utility-scale solar parks and shared infrastructure in support of private sector development.

Example of a country factsheet, available from https://globalsolaratlas.info/global-pv-potential-study: 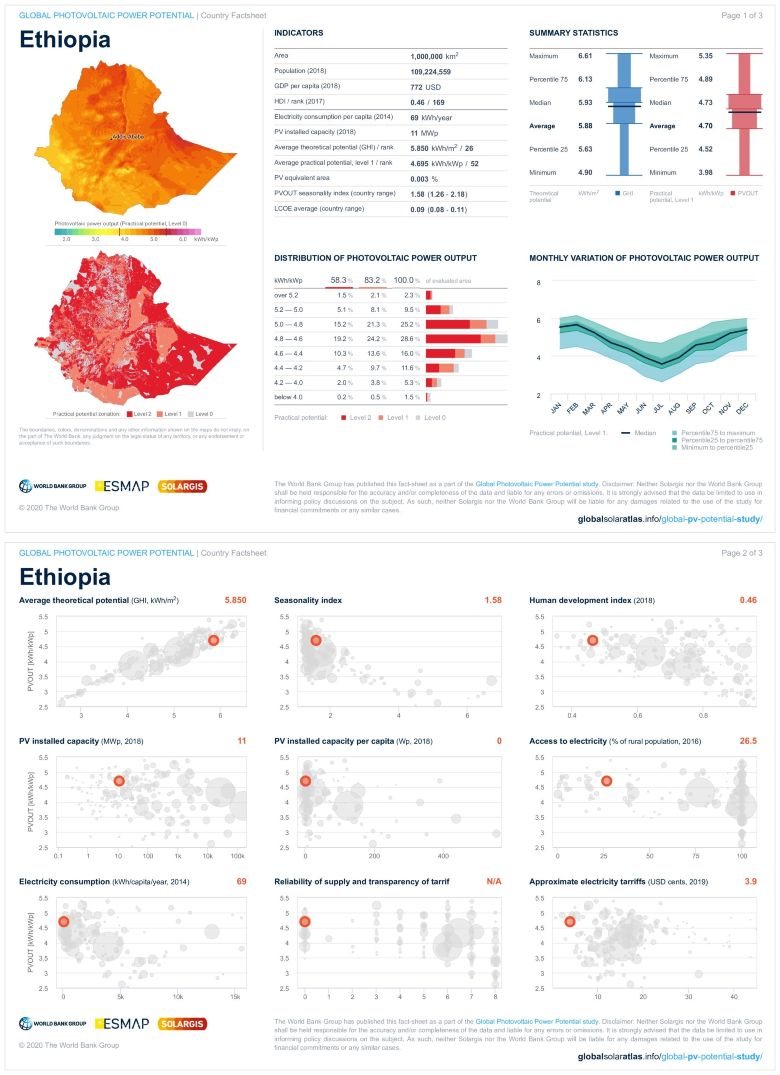