Evoke is a crash course in changing the world. 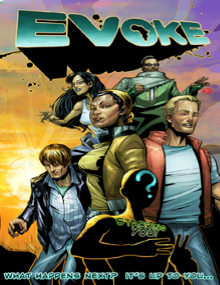 Want to know more? Look at the original Evoke trailer! 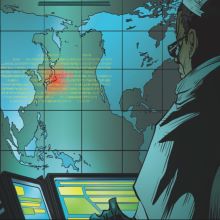 How can I create more engaging learning experiences to reach students who are disengaged and unmotivated? As learning moves outside of physical classrooms, student attention is increasingly competing with other media (such as movies, games, social networks).  In this context, one of the major challenges for education systems is identifying relevant and engaging digital content to support students in their learning process, as well as to inspire them to learn and take action to address global grand challenges in their local communities.

What are the important elements to consider when designing an e-learning platform for 21st century skills development?

Example of the badges for each of the skill clusters from Evoke: empathetic activist, deep collaborator, system thinker, creative visionary

Lack of Relevant Skills among youth is cited globally: Private sector demands critical thinking (72%), collaboration (63%) and communication (54%). The 2014 iteration in Colombia surfaced many important lessons on the use of open platforms to catalyze learning in Latin America, including the integration of competency frameworks for 21st century skills, the development of authentic tasks for measurement of skills, and the role of project-based learning in development of socio-emotional skills.

How do I implement transparent mechanisms to incentivize and measure 21st century skills in results-based financing?

Incentivizing and measuring the development 21st century skills through results-based financing or conditional cash transfers. Transparency is critical to scale education financing: Studies have shown that in many countries only 13% of intended resources actually reach the school. At the same time, student engagement and motivation represent a persistent problem throughout the education sector. Evoke’s blockchain pilot aimed to pilot solutions to both of these problems; the project worked to create incentives for students to complete coursework by issuing tokens (dubbed “Evocoin”) as a reward for completed coursework. The Evocoins could then be redeemed for cell phone minutes in a marketplace on the platform.