Trouble in the Making? The Future of Manufacturing-Led Development

In the past, manufacturing created jobs and increased productivity in developing countries. But technology is improving, trade is slowing, and industrial automation may mean fewer jobs in the future. To continue advancing, developing countries must adapt. But how? Find out more: www.worldbank.org/futureofmanufacturing. Music Credit: Podington Bear, Electric Car. 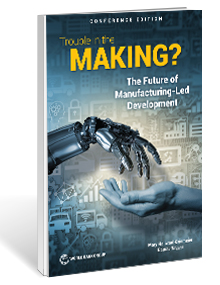 WASHINGTON, September 20, 2017 – Throughout history, lower-income countries have relied on manufacturing, which provides jobs for unskilled workers, helps increase productivity, and drives economic growth, as a central driver of development. However, success in manufacturing and global value chains is currently concentrated in a limited number of countries. In 2015, 55% of the world’s manufactured goods were produced in high-income countries. China, the world’s largest producer, accounted for another 25%. Where does this leave other countries?

A new report from the World Bank Group’s Trade & Competitiveness Global Practice, Trouble in the Making? The Future of Manufacturing-Led Development, explains that the criteria for becoming a desirable manufacturing location are changing. Companies once influenced by the prospect of inexpensive labor costs are beginning to favor locations that can better take advantage of new technologies. 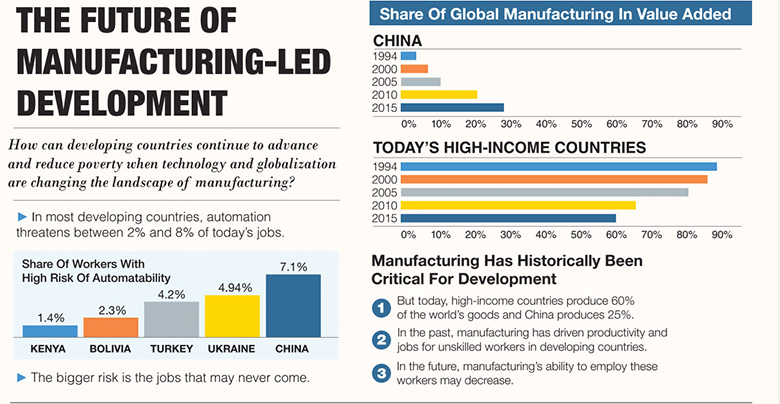 How can developing countries continue to advance and reduce poverty when technology and globalization are changing manufacturing? View full graphic>>

The increasing adoption of industrial automation, advanced robotics, smart factories, the internet of things, and 3D printing are transforming the manufacturing process. “The use of new technologies to produce traditional manufactured goods will be disruptive in developing economies – whether they are using the new technologies or not,” says Mary Hallward-Driemeier, Senior Economic Advisor with the World Bank Group’s Trade & Competitiveness Global Practice and lead author of the report. “If labor represents a smaller share of costs, more production may happen in richer countries, closer to consumers. Fewer businesses may move to lower-cost locations and local firms will face steeper competition. But it is not all bad news. There are new opportunities too – and that part of the story needs more attention.” 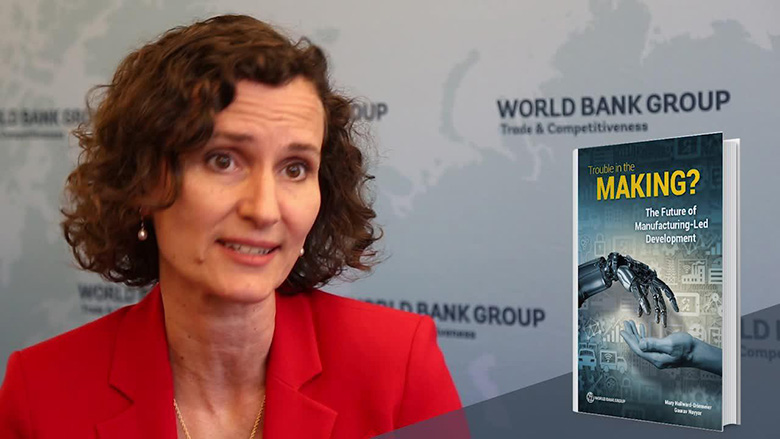 Mary Hallward-Driemeier on the Future of Manufacturing-Led Development

The pattern is a familiar one – in some sectors, robots and other technological advances are automating jobs once done exclusively by people.  In China, for example, factories are projected to have more than 400,000 industrial robots installed by 2018, the highest number of any country in the world. FoxConn – the firm known for producing Apple and Samsung products in China’s Jiangsu province – recently replaced 60,000 Chinese factory workers with industrial robots.

By reducing the relative importance of wages, robotics and “smart” factories can change what it takes for locations to compete in global manufacturing markets. Philips in the Netherlands and Adidas in Germany are two companies who recently “reshored” production of their shavers and sneakers back home to be closer to final consumers. In each of these cases, the newer factories powered by technology provided cost savings over their offshore plants powered by low worker wages.

At the same time, changes in the global economy are presenting other challenges.  Weak import demand resulting from the trade slowdown following the 2008 financial crisis, the declining trade in parts and components, China’s continued expansion at the lower end of global value chains, and emerging threats of protectionism can all dampen the potential for growth in manufacturing.

The intersection of these trends in technology and trade shape where and how production happens, where different types of jobs are being created, and the extent of economic opportunities around the world. There is a risk that manufacturing may no longer be an accessible pathway for low-income countries to develop.

However, The Future of Manufacturing-Led Development asserts that the future is not all doom and gloom. Although dramatic, media reports of massive job losses due to automation may be overblown in developing countries. In fact, according to the report, the threat of automation to today’s jobs may be a relatively modest two to eight percent for developing economies. The bigger unknown, according to the report, is “tomorrow’s jobs.” On one hand, there is a real risk that countries will lose out on jobs that are never created. On the other, new technology could also lead to entirely new occupations that can’t be predicted today.

"Countries absolutely need to address the costs of change. However, to enable development, more attention should be focused on positioning firms and workers to take advantage of new opportunities. This work helps to shift the focus on what needs to be done in this critical agenda."
Anabel Gonzalez
Senior Director, Trade & Competitiveness Global Practice

Despite a rising bar for economies to be globally competitive, there are opportunities ahead for developing countries. The production of tradable goods such as textiles, garments, and footwear continue to be labor-intensive and do not feature much automation yet. Ethiopia is an emerging hub for this type of textile production, attracting large amounts of investments from China and serving as a garment source for major European brands such as H&M.

Commodity-based manufactures, such as food processing, wood and paper products, and basic metals will also remain an entry point for less-industrialized countries. Brazil is one country that has excelled in this area, with $44.2 billion in exports in 2016.

Finally, services, including those related to businesses – such as call centers and data centers – and those related to manufactured products – such as design, marketing and distribution – are another area where developing countries can take advantage of future opportunities. With its success in call centers, the Philippines, for example, has made a name for itself as an offshore business services hub, employing 1 million employees with an estimated $18 billion in exports.

Gaurav Nayyar is an economist with the Trade & Competitiveness Global Practice and report lead author.

“Countries absolutely need to address the costs of change. However, to enable development, more attention should be focused on positioning firms and workers to take advantage of new opportunities.  This work helps to shift the focus on what needs to be done in this critical agenda,” says Anabel Gonzalez, Senior Director of the Trade & Competitiveness Global Practice at the World Bank Group.

How can countries prepare for change? The report suggests a policy agenda focused on three dimensions: competitiveness, capabilities, and connectedness.

Manufacturing will remain a part of development strategies, but its contribution to inclusive growth is likely to be lower than in the past. The feasibility of attracting production and enabling local firms to use new technologies is becoming more challenging. As countries adjust to the changing global economic environment, meeting the policy agenda is urgent. “Change creates winners and losers,” says Gaurav Nayyar, Economist with the Trade & Competitiveness Global Practice and report lead author. “Policy makers need to identify concrete ways for developing countries to position themselves to address the disruptions of technology and take advantage of globalization. Not being prepared could be costly, and complacency is not an option.”