How Developing Countries Can Get the Most Out of Direct Investment

The World Bank Group surveyed hundreds of executives at multinational companies to find out what drives decisions around foreign direct investment. The results show that investors value a business-friendly regulatory environment as well as stable macroeconomic and political conditions.

The question examined in the report is when and under what circumstances are these benefits of FDI most likely to occur.

Co-authored by the World Bank Group’s International Finance Corporation (IFC) and the Trade & Competitiveness Global Practice (T&C), the report considers developing countries as both sources and recipients of FDI. The analysis examines the ability of developing countries not only to attract private investment but to retain and leverage it for inclusive and sustainable growth.

"A country’s investment competitiveness goes beyond attracting FDI. It is determined by the country’s ability to bring in, retain, and leverage private investment for inclusive and sustainable economic growth. "
Anabel Gonzalez, Trade & Competitiveness Senior Director, and Ted H. Chu, IFC Chief Economist in the Foreword to the Global Investment Competitiveness Report 2017/2018

The investor survey shows that political stability and security along with a stable legal and regulatory environment are the leading country characteristics considered by executives in multinational corporations before they commit capital to a new venture. These considerations far outweigh such issues as low tax rates and labor costs.

Investment incentives may help attract FDI but are generally effective only when investors are wavering between similar locations as a new base for their exports. When investment is motivated by a desire to access a domestic market or extract natural resources, incentives are generally ineffective.

Of far greater importance, the report finds, is the level of legal protections against political and regulatory risks, such as expropriation of property, currency transfer and convertibility restrictions, and lack of transparency in dealing with public agencies.  Reducing these risks at the country level is a foundation without which reducing project-level risks will not lead to increased investment and growth in developing countries. 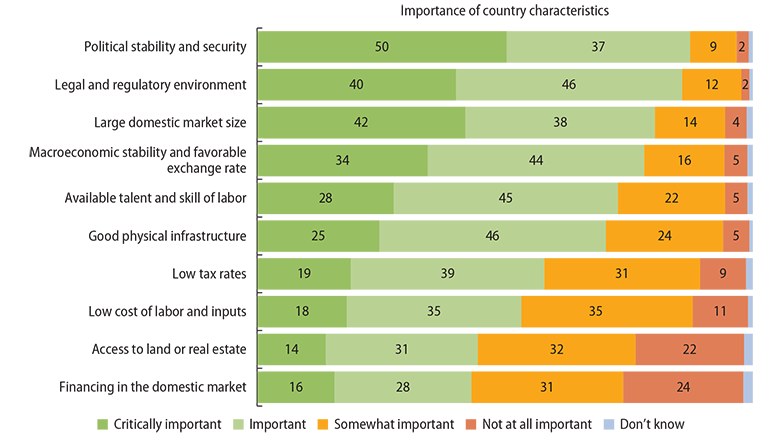 In examining the contribution of foreign investment to local economies, the report finds that most of the research and empirical evidence demonstrates that FDI helps foster development in recipient countries.  For example, the analysis finds that local high-growth firms in developing countries benefit the most from increased FDI in their markets through business linkages and introduction of new technologies and know-how.

FDI flowing outward from developing countries (OFDI) is one of the emerging storylines covered in the report. This kind of investment has increased 20-fold in the last two decades and by 2015 made up one fifth of total global FDI flows. While much of this investment comes from the so-called BRICS (Brazil, the Russian Federation, India, China, and South Africa), about 90 percent of developing countries are now reporting outward FDI.

Both the report and survey find that while investors in developing countries weigh similar factors in their decision-making, investors from developing countries are more willing to target smaller and often higher-risk regional economies as part of a stepping-stone strategy. This is a key consideration, particularly for countries coping with conflict and fragility looking to attract more and more diversified investment. The report recognizes that governments must have a nuanced understanding of investor motivations to best unlock the benefits of FDI for local economies and that each type of FDI brings its own set of potential challenges and rewards.

This publication comes in a global development context heavily focused on the importance of the private sector in achieving poverty alleviation, equitable growth, shared prosperity and other benefits laid out in the Sustainable Development Goals. Yet despite the abundant evidence of development benefits of FDI, the prospects for sustained global economic growth are clouded by the risks of trade and investment protectionism and other geopolitical pressures.

Chapter 1: What Matters to Investors in Developing Countries: Findings from the Global Investment Competitiveness Survey (PDF)