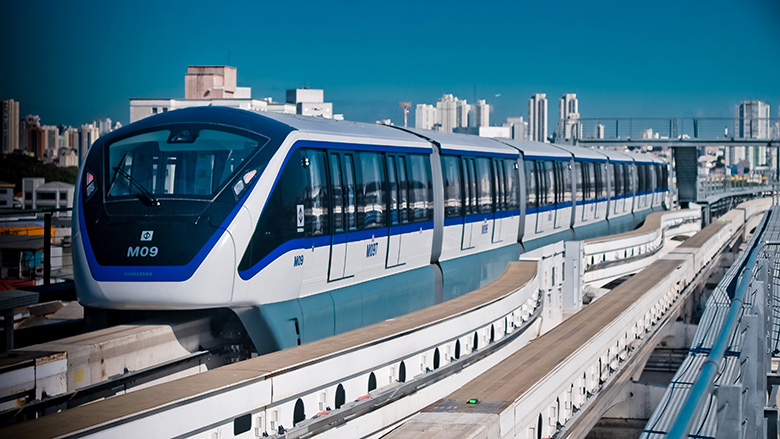 ​Since the 1990s, São Paulo has formulated and pursued an agenda focused on improving urban mobility. One central achievement has been the expanded metro network, notably the extension of Line 5, which has significantly improved mobility, reduced travel times, provided high-quality service, and increased the number of users, especially low-income passengers.

In 2009, São Paulo Metropolitan Region (SPMR) faced tremendous urban mobility challenges aggravated by limited access to public transport infrastructure and by a dense and rapidly growing population. Access to educational, employment, and other opportunities as well as to social services for low-income households, most of whom lived in the peripheries, was hindered by the inefficient and unreliable public transport options. Average commuting time was about 43 minutes, the highest among cities in Latin America, and even higher for low-income populations, with over 26 % of low-income travelers commuting for more than 60 minutes for each trip. For some travelers, commuting time in SPMR exceeded 2.5 hours daily. Low-income households, the main users of the metro, bore the brunt of its low-quality service, including overcrowded trains, high costs, and limited availability of rapid transport options. This was particularly true for Metro Line 5, which carried only 150,000 passengers a day in 2009, approximately one-fourth the average ridership per kilometer (km) of the other metro lines, mostly because of its poor connectivity with the main employment areas in the city of São Paulo.

Financing provided by the São Paulo Metro Line 5 Project was designed to improve mobility for public transport users in the Capão Redondo–Largo Treze–Chácara Klabin corridor in a cost-efficient, environmentally sensitive manner by extending the existing Line 5 approximately 12 km from the southwest of the city to the expanded center, constructing 11 new stations, and procuring and supervising the use of new metro trains.

By supporting the construction, train acquisition, and installation of systems for Metro Line 5, the project improved the mobility of public transport users along the Line 5 corridor. Metro Line 5 is now one of the most modern metro lines in Latin America due to several innovations including (i) the Communications-Based Train Control system, which automates communications between trains and track, resulting in more efficient and safer rail traffic management; and (ii) numerous service-enhancing features, including low noise levels, air conditioning, universal accessibility for persons with disabilities, high energy efficiency in stations, CCTV cameras in all trains, station monitoring from a dedicated control center, and platform doors that open when the train arrives to enhance safety, speed, and regularity in boarding times. The following key outcomes were supported by this project:

The World Bank, through the International Bank for Reconstruction and Development, provided a loan in the amount of US$650 million to the State of São Paulo to help finance the project. Of this US$650 million, US$400 million financed rolling stock, system installation, and technical assistance for Line 5, and US$250 million financed the remaining works of Phase 2 of the Line 4 extension, including civil works in Vila Sônia station.

The solid relationship between the World Bank and the State of São Paulo, the São Paulo State Secretariat for Metropolitan Transport, and Metrô contributed to the project’s successful implementation, building on the more than 25 years of World Bank support for urban transport investments and reforms in the São Paulo metropolitan area. The total costs of Line 5 are estimated at about US$3.7 billion. Other development partners providing co-financing to the Line 5 extension included the Brazilian Development Bank (BNDES), with US$1.9 billion, and the Inter-American Development Bank (IADB), with US$350 million. The Japan Bank for International Cooperation (JBIC) provided co-financing of US$130 million for the second Phase of Line 4. Moreover, both lines are currently operated by the private sector, which has committed to investing about US$2 billion in Line 4 and US$3 billion in Line 5 over the span of the concession periods of 30 and 20 years, respectively.

The extension of Line 5 in São Paulo has improved mobility for thousands of passengers—in 2019, this meant, on average, 563,000 passengers every day, of which 56 % were women and 58 % were from low-income households (earning less than four monthly minimum salaries). The entire population of São Paulo (more than 22 million people) now benefits from better rail transport and from Line 5’s effect in lowering GHG emissions by providing a high-quality alternative to more polluting travel modes, such as automobiles and motorcycles.

As described by one Line 5 user, her travel time to work has been significantly reduced with the opening of the new stations, and she has shifted away from using automobile and bus travel, avoiding the heavy traffic congestion in the city.

Post–COVID-19, the high-quality service provided by the Line 5 extension will contribute to rebuilding the public’s confidence in mass transport while addressing customers’ health and safety concerns. Future expansion of the metro network is expected to bring additional passengers onto Line 5, including a second expansion of the metro line that will provide accessibility to low-income populations in the vicinity of two new stations, Comendador Sant’Anna and Jardim Ângela. This later extension is expected to be financed by the private concessionaire in charge of Line 5 operations.