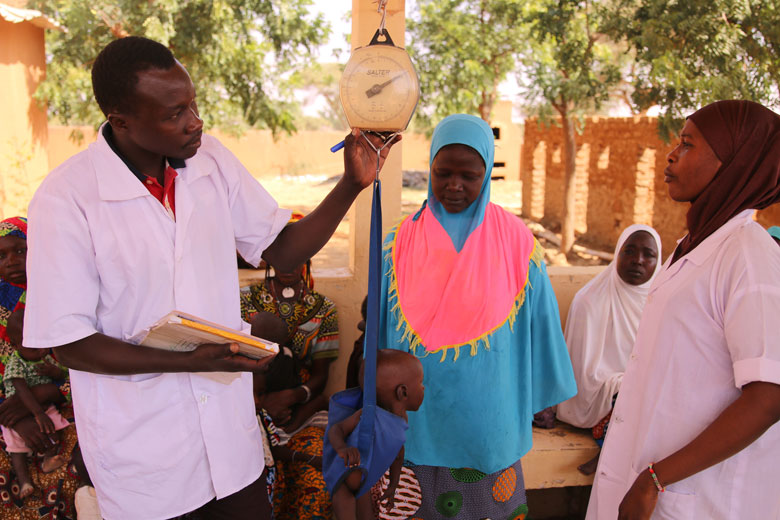 Nutritional follow-up of a child in an integrated health center.

The Population and Health Support Project in Niger provided reproductive health and nutrition services to over four million women and children in Dosso, Maradi, Tahoua, Tillaberi and Zinder. This was achieved through the project’s “Rapid Results Initiatives,” which mobilized 944 multi-stakeholder teams throughout 53 districts and 836 health centers between 2018 and 2020.

The fertility rate in Niger is among the highest in Sub-Saharan Africa (about seven births per woman). One in seven Nigerien women lost their lives due to pregnancy complications, and thousands more needlessly suffer trauma, infections, diseases, or disabilities that can haunt them for life.

Poor feeding practices also contributed to the high prevalence of stunting among children under 5 years old, especially those living in remote and underserved communities. Compounding the challenges were powerful socio-cultural barriers impeding the use of reproductive health services, even when they were available. Furthermore, in districts and areas where there had been gainful reproductive and child health solutions, these had not been adequately scaled-up across other districts, thus hindering the overall impact towards sound health outcomes.

The centerpiece of the Population and Health Support Project has been the Rapid Results Initiative (RRI), an approach to problem solving that empowers out-of-the-box thinking, experimentation, and collaboration. Each RRI focuses on a concrete objective and assembles a team of diverse stakeholders to achieve it within 100 days. RRIs are held several times a year at the health-center level and bring together local government and health personnel with midwives, women leaders, and religious / traditional leaders to develop and test ways to improve the effectiveness of health activities. During the COVID-19 crisis, the RRI dynamic has helped to ensure the continuity of essential basic services. The Ministry of Health and the regions are bound by annual performance contracts to improve results using RRIs, thus contributing to accountability. It comes as no surprise that the government of Niger has rated RRI as one of the top innovations in its national health plan.

While the project is expected to close in December 2021, the  disbursement-linked indicators’ final targets were already met and even exceeded in December 2019:

International Development Association (IDA) financing for this project is $103 million.

There is a strong partnership among key development partners in Niger’s health sector. The project is implemented by the Ministry of Health (responsible for the overall management as well as the monitoring and evaluation of the project), and the Ministry of Population. Furthermore, the project is relying on existing institutional and implementation arrangements for the Health Development Plan and the Government Declaration of Population Policy. The project is also robustly engaged with an array of communities, civil society, and development partners including the United Nations Population Fund, United Nations Children’s Fund, Spanish Agency for International Development Cooperation, French Development Agency, and GAVI the Vaccine Alliance.

The RRIs have successfully mobilized districts to work with communities to improve their health plans and make significant progress on key indicators. In doing this, the project is supporting new innovations. It also empowers decentralized leadership and learning around improved service delivery in communities.  Based on these positive performances, the Ministry of Health plans to extend the application of RRI to the remaining three regions and to the central level. RRI will also be one of the innovative approaches adopted for the new human capital project under preparation. 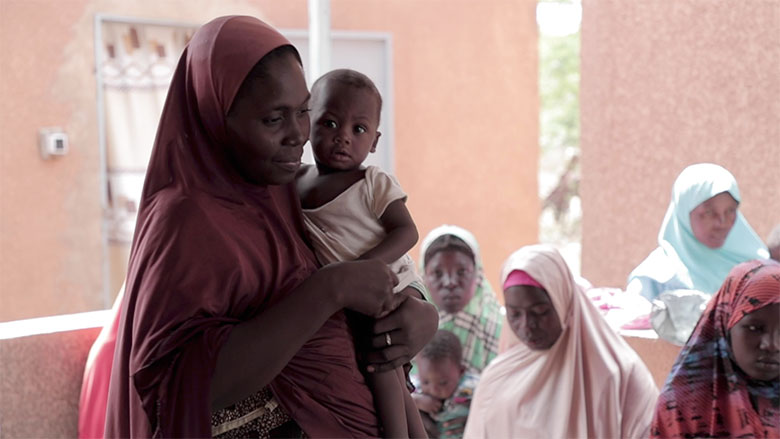 A mother and her child at the health center. Photo: World Bank

Alimatou Idrissa has five children, which is on par with the national average of seven births per woman. She lives with her family in Birni (about 100 km southeast of the capital Niamey). Idrissa found a new perspective and support in caring for herself and her children. “I used to give birth at home,” she says. “In case of a problem, I had no assistance. Since the project was set up, I give birth at the clinic, because I know that if there is a problem, I will be taken care of.”

The Niger Population and Health Support Project continues to benefit women like Idrissa. The project is boosting the supply and demand for high quality reproductive, maternal, and child and adolescent health services and nutrition counseling across five vulnerable regions of Niger.