LAMP organized a demo training for the project beneficiaries in horticulture and animal nutrition production.

Investments to improve livestock productivity and quality and boost market access helped reduce rural poverty and household food insecurity on a sustainable basis in Mongolia. The project supported 13,684 beneficiaries in total (6,083 female, 7,601 male) from 2014 to 2017.

Mongolia, a country with a population of 3 million, had more than 43 million livestock in 2010. Livestock-based agriculture has been a backbone of the Mongolian society and economy for years, providing livelihoods for around 35 percent of the country’s population. The livestock-based industry contributed to 10 percent of all export revenues in 2010, only next to mining.

However, the agricultural sector needed modernization – the transition from collective socialism to the market economy in 1990s caused long-lasting changes to agricultural production, food industry, and rural livelihoods, with disruptions in institutional mechanisms and service delivery systems. Underdeveloped agro-industries and poor market access left herders with low and insecure incomes. Around 33 percent of the rural population was living below the national poverty line in 2011. A strategic shift to market-led approaches was necessary to fix existing fragmentation in supply chains.

The project, covering 15 soums (sub-provinces) in Arkhangai, Bayankhongor, Gobi-Altai, Zavkhan, and Khuvsgul provinces, helped create productive partnerships by linking herders to markets and supporting increases in productivity and quality of products. This was done by leveraging private investment, such as by linking local herders – who often found it difficult to market their livestock at remunerative prices – to a meat processing and exporting company or helping them establish partnerships with private veterinary and breeding services. Herders also received trainings on safety standards, horticulture, fodder nutrition, as well as improved breeding practices. 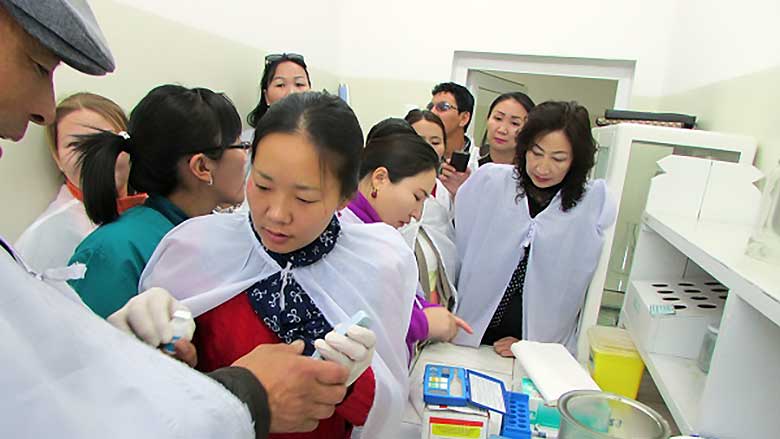 Matching grants provided through the project served as a catalyst for cooperatives and agribusinesses to leverage their private capital. Microgrants of up to $10,000 were also provided to the most vulnerable households to help them produce vegetables and fruits, thus diversifying their income sources and nutrition.

The project was successful in helping herder households substantially improve their earnings and livelihoods. Internal and external evaluations confirmed these project results achieved from 2014 to 2017:

International Development Association (IDA) designed the project based on the available analytical and evidence base. Global Agriculture and Food Security Program (GAFSP) provided the funding for project implementation in the amount of $12.5 million.

The LAMP project was implemented by the Government of Mongolia and supervised by the World Bank with technical inputs through a smaller Integrated Livestock-Based Livelihood Support Project technical assistance project in the amount of $1.5 million implemented by the Food and Agriculture Organization (FAO).

Several innovative interventions piloted under LAMP are being scaled-up through the IDA supported Livestock Commercialization Project , such as (i) veterinary service delivery with cold chain management for vaccines and veterinary drugs until the last mile, (i) enhancing livestock productivity, (iii) improved market access through productive partnerships, and diversification in livestock-based production systems by investing in core public goods that helps in achieving the policy priorities set by the Ministry of Food, Agriculture, and Light Industry of Mongolia, namely, increased livestock exports and enhanced sector competitiveness. Innovative project design using a value chain approach for livestock sector development has contributed to the national policy formulation and emerging legal framework, including the recently enacted Animal Health Law and Animal Breeding Law.

The project reached a total of 13,684 direct beneficiaries through a combination of investment, capacity-building, and information dissemination activities in 2014-2017. Below are some highlights:

“With investments and equipment provided by the project, our unit is now able to provide regular trainings to herders on animal health. We have trained 756 herders so far. We are also proud to be able to safely deliver and administer vaccines for animals. Thanks to better trained herders and speedy veterinary services, our soum has become a healthy region free of infectious zoonotic diseases,” – N. Enkhbold, Head of Veterinary and Breeding Unit, Bayantsagaan soum, Bayankhongor province.