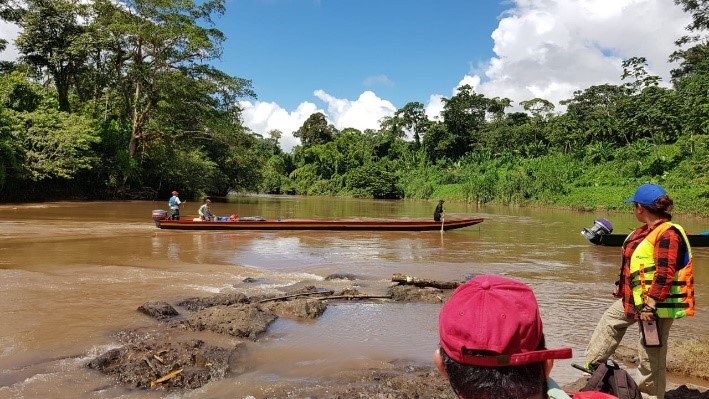 The Government of Nicaragua is implementing a programmatic strategy to strengthen land governance and tenure rights, focusing particularly on poor and vulnerable populations, gender equity, and historical land claims of Indigenous peoples. A major achievement under the strategy is a consolidated land administration framework in targeted areas that has strengthened the population’s property rights through improved regularization, titling, and registry services, that has benefited 935,813 people between 2013 and 2020, of which 50 % are women. Legal documents related to land tenure, 92,022 of which were new titles, went to 120,965 families, of which 52 % of the beneficiaries are women, either individually or as part of a couple. Five protected areas were successfully demarcated and geo-referenced, and the new National Integrated Cadastre-Registry Information System was completed and implemented in Managua and Estelí, two of the most important provinces for Nicaragua's economy.

Nicaragua has an estimated population of 6.55 million and is the second poorest country in Latin America. According to World Bank in 2019, 24.9 % of the country lived below the poverty line, and mostly in rural areas; 41 % of Nicaraguans live in rural areas with limited access to basic services, and 31 % of the labor force is employed in agriculture, which remains a key sector in the country's economy, even if its relative weight has decreased over time. Most of the population (59 %) is now urban, and surging urbanization and limited opportunities have led to the proliferation of poor, informally occupied settlements, often precariously located.

Strengthening property rights and modernizing land administration is central to Nicaragua's social and economic development. Recent government efforts have helped transform the land sector through new laws, modernized institutions, and systematic land regularization. However, the task is complex:  previous conflicts in the country affected land records and tenure security. Years of inconsistent legal and administrative decisions regarding land contributed to tenure insecurity and undermined the population's confidence in state institutions, the capacity of which was simultaneously weakened. Estimates are that about one-third of parcels in rural areas are still held without a clear title, affecting poor agricultural producers' tenure security and access to credit, among other things. Overall, land tenure insecurity has hindered potential investments and land market transactions and generated land disputes. In addition to the need to continue the process of legalization of tenure and creating a modern cadaster, further advances need to be made on gender equity related to property rights by ensuring that current legislation allowing joint titling for couples and promoting women's land rights is implemented.

To address these challenges, the World Bank has supported Nicaragua through the First and Second Land Administration Projects: PRODEP I (2002–2013) and PRODEP II (2013–2020). Through these projects, the government has implemented a programmatic approach focused on modernizing and then consolidating the land administration framework, clarifying the land rights of poor rural and urban populations, and recognizing the land rights of Indigenous peoples.

The country's policy and legal framework have been strengthened, and key land agencies' capacities have been improved. Specifically, the government enacted laws essential for modernizing cadastre and property registry, as well as for recognizing Indigenous peoples' land rights in the Caribbean region.

In parallel, the institutional framework was consolidated with the Nicaragua Attorney General's Office (PGR) taking the lead on land issues, including acting as implementing agency for Bank-financed and other land operations. The technical capacity of the main land agencies has progressively increased, including the Nicaraguan Institute for Territorial Studies (INETER), which is responsible for the national cadastre system; the Property Intendancy (IP) under PGR, which oversees land regularization; and the property registries under the Supreme Court of Justice (CSJ), which manages legal records and information.

Moreover, improvements in the cadastre and regularization methodology have been mainstreamed. Through these efforts, Nicaragua has also developed a good practice model for alternative conflict resolution and has promoted gender equity in land rights.

Between 2013 and 2020, the project achieved the following key results:

The World Bank, through the International Development Association, provided two IDA-financed credits totaling US$54 million equivalent to finance this project. The first IDA credit was approved on March 26, 2013, became effective on July 12, 2013, and closed on December 31, 2018; an additional financing through a second IDA credit of US$18.0 million, approved on June 26, 2017,  closed on June 30, 2020. As requested by the government, a cancellation of US$4.0 million from the CERC was processed on March 24, 2014. The canceled amount was used for the Honduras and Nicaragua Catastrophe Risk Insurance Project.

During PRODEP II, the Food and Agriculture Organization of the United Nations (FAO) served as a key partner, providing technical assistance, especially in monitoring and evaluation (M&E), through consultants specialized in land administration and M&E.

In the last beneficiary survey conducted in June 2020, almost 100 % of the beneficiaries were satisfied with the cadastre (99 %), regularization (100 %), and titling (99 %) of their properties under the project. Beneficiaries expressed satisfaction in finally knowing the precise measurements and boundaries of their properties and having a legal document that ensures their land tenure rights. The beneficiary survey also indicated that having a title increases the probability that the beneficiary's land will increase in value; 26 % increases have occurred on lands with title, as compared to those without it.

One of the project’s greatest achievements has been the work with Indigenous peoples to carry out the cadaster of their lands. This work started in Mosonte, with very positive results, and continued in other Indigenous communities that had been requesting strengthened land rights, for which cadastral surveying is a critical step. The dialogue with Indigenous stakeholders had broken down previously but was fully reestablished in the year 2019, most remarkably in Telpaneca as the government demonstrated its openness and commitment to adopting a methodology for working in these communities in ways consistent with their culture and concerns. Examples include placing local Indigenous peoples in technical roles and ensuring full participation of Indigenous peoples in all stages of decision-making. The trust built in Mosonte catalyzed the interest and commitment of other Indigenous communities to engage with the project. The cadaster was completed in four Indigenous communities in the Pacific and northcentral regions of the country—Mosonte, Telpaneca, San José de Cusmapa, and Las Sabanas—and 50 % of the cadastre was carried out in Pantasma and Jinotega. The government noted that including both Indigenous and non-Indigenous representatives on the teams carrying out the fieldwork facilitated the resolution of land conflicts, leading to conflict resolution agreements in 71 % of disagreements.

As part of its programmatic approach and to expand the land regularization activities and implementation of SIICAR to other areas of the country, the government of Nicaragua is implementing a third phase (PRODEP III, US$50 million), which was approved by the Bank in March 2018. Various factors will contribute to the sustainability of project outcomes:

Table 1. Project coverage area by Municipality and Department of Nicaragua