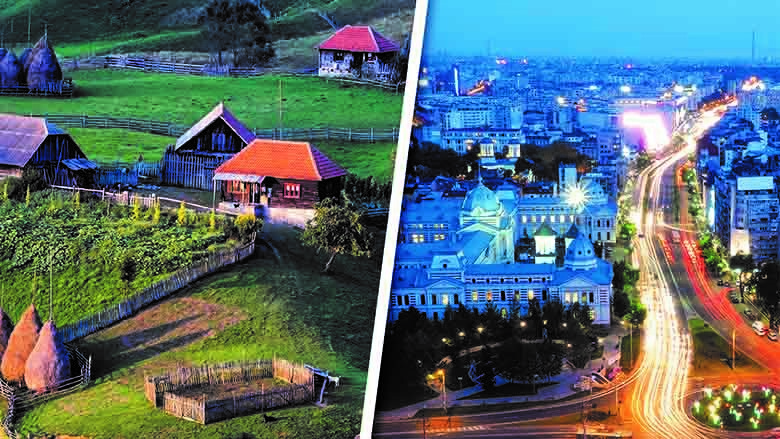 Romania’s transformation has been “a tale of two Romanias”: one urban, dynamic, and integrated with the EU, the other rural, poor, and isolated.

Since joining the European Union (EU) in 2007, Romania has witnessed a remarkable increase in prosperity. The benefits of the free movement of people and capital associated with EU membership have led to fundamental societal changes and the country’s modernization. Romania has become a regional energy leader, innovated education training programs and made progress towards improved business environment and competitive economy.

Romania has achieved impressive successes on its development path. Since 2010, its economic growth has been one of the highest in the EU, with an average growth rate of 3 percent. Reforms spurred by EU accession have boosted productivity and integrated Romania into the EU economic space, and GDP per capita rose from 30 percent of the EU average in 1995 to 64 percent in 2018. However, the foundations of growth still face challenges: wage increases sometimes outstrip productivity growth; investment is volatile; and amid an aging and shrinking population, roughly 20 percent of the labor force is living and working abroad.

Although Romania boasts one of the lowest levels of debt in the EU, macroeconomic policy is often focused on the short term. After 11 years of EU membership, infrastructure remains weak, constraining investment and productivity. The private sector, while dynamic, is still small, with limited access to finance. Driven by strong growth, incomes are converging with the EU average, but poverty reduction has been slow and social, education and regional divides persist.

Moreover, a generally tepid commitment to policy implementation hampers institutional capacity; inadequate local service delivery and insufficient funding restrict the expansion of equal opportunities; and a lack of coordination between central and local authorities inhibits the country’s resilience to natural disasters and climate change. Romania needs to address these institutional challenges to sustain the recent impressive economic growth, share prosperity among all its citizens, and protect its natural environment.

Over the past three decades, the World Bank Group (World Bank Group) has worked to strengthen many of Romania’s economic sectors. Its support was central in helping the country to stabilize its economy in the early 1990s, lay the foundations for EU membership, and more recently, promote faster convergence and inclusive growth. The Bank has utilized its full range of financing and advisory instruments, from Development Policy Loans (DPLs) and investment operations to Advisory Services and Analytics (ASA), including Reimbursable Advisory Services (RAS).

In 2009–13, DPLs were instrumental to Romania’s ability to overcome macro imbalances, resume growth, and restart the EU convergence process. The Bank’s role has evolved from trusted financier to strategic government advisor, supporting policy formulation and implementation and enhancing local and central government capacity to better use EU funds. The RAS program has been key in providing policy advice and implementation support, becoming one of the Bank’s largest RAS efforts.

To address the divergent urban and rural learning outcomes, access to quality education in rural areas has been increased through 2009. The percentage of grade 8 rural students scoring over 90 percent on the national examination quadrupled between 2001/02 (2.4 percent) and 2008/09 (10.68 percent), and the urban-rural gap was completely reversed for students continuing education beyond grade 8 between 2003/04 (12.7 percent) and 2008/09 (-1.5 percent).

Policy-making capacity has improved. A set of National Development Indicators compatible with international reporting systems and an award-winning National Education Database (2007) were developed to regularly monitor and report on education outcomes. Ministry’s capacity for planning, monitoring and evaluating the implementation of strategies improved through advisory services.

The International Finance Corporation (IFC) facilitated financial services to 96,000 micro, small, and medium enterprises (MSMEs) and facilitated over US$6 billion in MSME finance according to 2018 IFC data.

The Cadaster Agency established a new framework to accelerate the land registration process. Coverage of urban real estate registration expanded from 39 percent (2013) to 57 percent (2017), on track for completion by 2023.

IFC’s commitment of US$15.9 million in MedlifeSA, a leading Romanian health care provider, helped increase access to affordable and quality health care in secondary cities from 1.9 to 2.3 million patients during 2014–18.

IFC provided liquidity and risk coverage to banks, supporting US$547 million over 640 trade finance transactions in Fiscal Year 2014-174–. IFC was the lead investor in the first Tier 2 Basel 3 bond issued by a Romanian bank and the largest subscriber of the first covered bond issued in Romania.

Since the start of operations in 1991, the World Bank Group has provided over US$14.25 billion in financing for 121 International Bank for Reconstruction and Development (IBRD) loans, guarantees, and grants. IFC invested approximately US$3 billion, including US$607 million mobilized from partners, in 108 projects in various sectors.

Pre- and post-accession reform agendas were supported by investment operations and a series of DPL operations that provided a total of US$2.69 billion for macroeconomic stabilization and structural reforms in numerous areas, including public finance, energy, health, education, and the pension system. Investment operations complemented the Government’s financing needs and supported reforms in such areas as justice, education, social protection, agriculture, energy, environment, finance, and small and medium enterprises (SMEs).

The current World Bank Group program comprises a wide range of instruments with a strong focus on knowledge engagements, mainly through RAS, supporting central and local public institutions’ ability to address administrative capacity constraints in strategic planning, the prioritization of investments, and policy formulation and implementation.

The World Bank Group’s active portfolio includes eight lending operations amounting to US$1.42 billion, eight trust funds (seven Bank-executed and one recipient-executed) and 57 ASAs, of which 29 tasks correspond to 18 RAS agreements signed and under implementation. The active RAS program in 2019 is the second largest across the World Bank Group at US$53.56 million. Key drivers in the choice of engagements include the importance of the capacity constraint to be addressed, client demand and support by a credible champion, and the World Bank Group’s ability to add value and create positive spillovers beyond Romania.

The EU and its institutions are leading development partners for Romania, providing both policy direction and substantial financial support. The World Bank Group assumes a complementary role, catalyzing EU funding and helping Romania to maximize the available resources. The World Bank Group coordinates closely with the EU and international financial institutions (IFIs) on critical reform areas and overall country engagement and brings technical and analytical depth, global knowledge and experience, objectivity, and credibility to partners such as the European Commission (EC), European Investment Bank (EIB), European Bank for Reconstruction and Development (EBRD), International Monetary Fund, and others.

The overall coordination of Bank technical assistance and financing operations with other key partner programs has proved useful to advancing and supporting reform areas. The World Bank Group works with the EC in its donor capacity (managing EU trust funds) and as advisor on essential reform issues to ensure that EU views and priorities are aligned with country objectives and World Bank Group support. The Bank is collaborating with EIB and EBRD to provide government-financed advisory services using EU funds during the 2014–20 period, helping to identify synergies and complementarity and avoid potential overlaps of IFI technical assistance. Bilateral exchanges remain the regular coordinating tool for the EC and IFIs in areas of common interest and joint work.

The World Bank Group is uniquely positioned to support Romania in strengthening its institutions and accelerating convergence with more advanced EU states. The current five-year Country Partnership Framework focuses on several priority areas, with one—building institutions fit for a prosperous and inclusive Romania—serving as prerequisite to the other three: ensuring equal opportunities for all, catalyzing private sector growth and competitiveness, and building resilience to shocks.

To achieve these goals, the Bank will deploy its full range of financing and advisory instruments, including continued development and implementation of the RAS program to support strategies for real institutional change. A greater emphasis on hands-on implementation support within investment operations is an effective complement to ongoing intensive capacity building efforts through a broad RAS program. A “One World Bank Group” approach aimed at fostering synergies among World Bank Group institutions is employed to leverage impact.

The five-year World Bank Group engagement is aligned with the 2014–20 EU programming period. The Bank and IFC pursue more focused interventions, with clear indicators to show progress and mobilize support for further reform. The Multilateral Investment Guarantee Agency remains available to strategically support investments that are consistent with the Bank’s Maximizing Finance for Development approach as well as the country’s priorities.

Prime Minister Viorica Dăncilă (2019) expressed appreciation for the “excellent quality of cooperation between the Romanian state institutions and the World Bank,” pointing out that this effectively contributed to “the modernization of our country and its economic development over the last decades.” In this context, the head of the Executive highlighted the results of the assistance programs that the World Bank has developed so far in Romania in various fields: health care, social assistance, fiscal policy, the judiciary, secondary education, and the environment.

Sulfina Barbu, Romania’s Minister of Labor and Social Protection, speaking about the Romania Revamps System for Heating Benefits (2011), said, “I believe the team managed to come up with a solution that works for Romania. So far, the social impact has been good.”

Decebal Făgădău, Mayor of the Municipality of Constanta (2017), noted that “Constanta is among only a few urban areas in the world to work directly with the World Bank. By accessing tailored technical assistance solutions, the city has a unique opportunity to capitalize on its potential to become more competitive and more attractive for people, businesses, and tourism.”

Supporting a Strong Economy For All Romanians (Video)

Economic Growth in Romania - Using people for the core (Video)

What does it take to modernize government administration? Lessons from Romania (Blog)

What will it take for Romania to fully reap the dividends of digital transformation? (Blog)