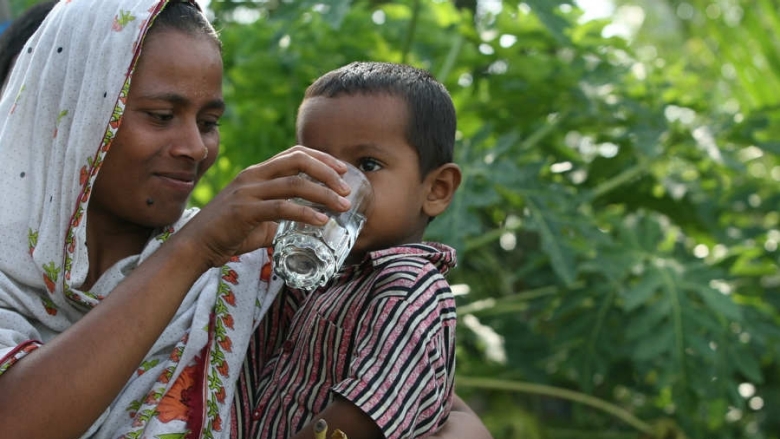 To enhance access to safe water supply and hygienic sanitation across the rural areas of the country, the Bangladesh Rural Water Supply and Sanitation Project invested in the construction of piped water supply schemes and household latrines, and the installation of deep tube wells in areas where shallow aquifers suffer from contamination. 1,480,172 people in rural areas were provided with access to improved water sources under the project; 247,500 people gained access to hygienic latrines.

Bangladesh has one of the highest population densities in the world, with 109.3 million people, or 75 percent of the population, living in rural areas.  While improved water supply coverage in rural Bangladesh is now above 97 percent, water quality still poses a significant challenge. Thirteen percent of the country’s water sources have arsenic levels above the threshold that the government defines as dangerous. In private piped-water taps sampled across the country, 80 percent were found to be contaminated with E. coli bacteria. Water salinity, iron, and other bacterial pathogens pose additional threats.

The quality of sanitation coverage is another area of concern.  Bangladesh has almost completely eradicated the practice of open defecation, but a Bank study revealed that only 37 percent of the country’s latrines are hygienic, while 35 percent are unclean.  Recognizing these serious quality challenges, the Government of Bangladesh developed a National Sanitation Strategy in 2005 to promote the concept of a hygienic latrine with the intention that people gradually move towards this technology.

Since 1998, the World Bank has supported the government of Bangladesh to improve safe water availability. Built on the experience of two earlier projects, the Bangladesh Rural Water Supply and Sanitation Project (BRWSSP) launched in 2012, applied a participatory approach to ensure community input and a robust monitoring process to promote transparency.

The project focused on increasing the provision of safe water and hygienic sanitation in the rural areas of Bangladesh, particularly where shallow aquifers were highly contaminated by arsenic and other pollutants.  Targeting 383 Unions in 33 districts and implemented at the union level of the government’s local administrative tier, the project applied a series of innovative service delivery models to improve access to safe water and hygienic latrines. The project adopted a Public-Private Partnership (PPP) approach for the construction of the piped water supply schemes whereby Private Sponsors for all schemes were identified through a competitive process.  This PPP model built upon Build-Operate-Transfer (BOT) modality and in which private sponsors provided equity sharing, incentivized the private operators to maximize household connections to increase revenue and profit.

Capacity constraints within the government were addressed through new innovative water supply and sanitation (WSS) service delivery approaches viz. private sector partnership modalities that challenged traditional roles and responsibilities. Private sector sponsors and sanitary entrepreneurs were leveraged to compensate for gaps in government capacity. Over time, through capacity building and technical assistance, government institutions’ capacity was strengthened to govern the provision of water and sanitation services in respective rural areas.

1,480,172 people in rural areas of Bangladesh were provided with access to improved water sources through both non-piped water point and piped water schemes.

The project contributed to the following results from 2012 to 2017:

The World Bank, through the International Development Association (IDA), provided a credit in the amount of $41.04 million. Besides, the Bank also brought in global knowledge and international experience in the engagement of the private sector to deliver and maintain services.

Throughout the project, the World Bank coordinated its efforts closely with the Government of Bangladesh, specifically with the Ministry of Local Government, Rural Development and Cooperatives (MLGRD&C), which leads the country’s water supply and sanitation sector.  The MLGRD&C delegates functional responsibility across several key departments: The Department of Public Health Engineering (DPHE); Local Government Engineering Department (LGED); Water Supply and Sewerage Authorities (WASA) in metropolitan Dhaka, Chittagong, Khulna, and Rajshahi; and local authorities, including the Union Parishads (UPs) in rural Bangladesh.

The DPHE, along with the International Centre for Diarrheal Disease Research, led efforts to test for arsenic contamination in tube wells and Arsenic-Iron removal plants (AIRPs).

The Bangladesh Rural Water Supply and Sanitation Project established infrastructure and groundwork in the country’s rural areas to address some of their most pressing challenges, including arsenic and bacterial contamination in the water supply and a lack adequate and hygienic sanitation facilities.

New delivery models and technical training promoted through the project have increased the capacity and effectiveness of the local government to manage and operate water services. More than 11,000 individuals attended training sessions provided through the project.  The establishment of almost 400 water user committees helps to facilitate continued community involvement and government accountability. Finally, the design of the project exposed the government to new private sector partnership modalities, and the current management arrangement enables the government to continue to learn from the private sector partners engaged.

Rural communities located in Bangladesh’s arsenic hot spots and those who previously had no piped water schemes benefited greatly from the project.  More than 1,727,000 people directly benefited from the project; among them 863,836 are women.