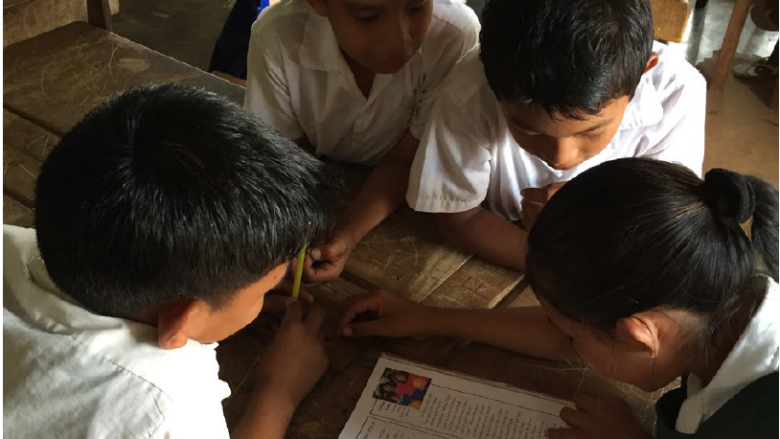 Nursery and grade 1 teachers and students in 231 schools in Guyana’s Hinterland Regions and 73 schools in its remote riverine areas of its Coastal Regions received interventions to help improve the quality of early childhood education services. During the first cohort’s two nursery years, the percentage of Hinterland students attaining at least an “approaching mastery” level of emergent literacy and numeracy rose by 36 and 40 percentage points, respectively.

In 2014, the quality and equity of Early Childhood Education (ECE) services were the most critical issues in need of attention in Hinterland and remote riverine Coastal communities. In these areas, a high percentage of teachers (53 percent) were untrained, operated with inadequate teaching materials, and served children of parents with low levels of adult literacy.

These circumstances translated into lower levels of emergent literacy and numeracy skills for nursery students in the Hinterland Regions compared with Guyana’s more affluent Coastal Regions. A 2015 Nursery Diagnostic Assessment showed that Coastal students had attained “approaching mastery” levels of emergent literacy and numeracy that were significantly higher than those attained by their Hinterland peers (50.5 and 53.5 percent versus 39.6 and 41.9 percent, respectively). A project targeting improved ECE for Guyana’s most vulnerable children was urgently needed to build these valuable skills and boost the learning potential of these students.

The Guyana Early Childhood Education Project enabled interventions that included: (i) development of a new nursery/grade 1 curriculum and instructional strategies; (ii) a multiyear training program for teachers to strengthen content knowledge and pedagogical skills; (iii) a multiyear in-classroom monitoring program to evaluate teachers’ performance in implementing the new curriculum; (iv) distribution of ECE Resource Kits to promote learning through play; (v) implementation of a pilot program to strengthen parents’ support of their children’s emerging literacy and numeracy; and (vi) execution of a media campaign focused on caregivers’ role in children’s intellectual development.

At project close (September 2018), 526 nursery and grade 1 teachers had completed training in all topics included in three training modules.

Between June 2015 and September 2018, over 8,700 nursery and grade 1 teachers and students benefitted from the project, 51 percent of whom were female. The project fostered improvements in ECE for Guyana’s most disadvantaged early learners, as evidenced by these outcomes:

The Guyana Early Childhood Education Project, through the Global Partnership for Education Trust Fund, received a grant of US$1.7 million to improve the quality of ECE offered to disadvantaged nursery and grade 1 students over three years. The World Bank served as the coordinating and grant agency for the trust fund, which is endowed by the governments of 20 countries: Australia, Belgium, Canada, Denmark, Finland, France, Germany, Ireland, Italy, Japan, Luxembourg, the Netherlands, Norway, the Republic of Korea, Spain, Sweden, Switzerland, the United Arab Emirates, the United Kingdom, and the United States.

During project implementation from 2015 to 2018, a Bank team effectively guided and supervised a small team within the Ministry of Education in all aspects of project coordination, monitoring and evaluation, and financial management and procurement duties.

As noted above, the World Bank served as the coordinating agency for the project’s US$1.7 million grant from the Global Partnership for Education Trust Fund.

The Ministry of Education’s commitment to building on project achievements is evidenced by the following: (i) teacher training modules developed under the project are now incorporated into the standard training provided to new nursery and grade 1 teachers; (ii) funding is allocated to replenish existing ECE Resource Kits and to purchase new kits for nursery and grade 1 classrooms nationwide; (iii) funding is allocated to expand the Parent Circle initiative beyond the pilot and to provide oversight of new groups as they form; and (iv) the ministry maintains the Read-Play-Love website as an educational resource for caregivers of young learners.