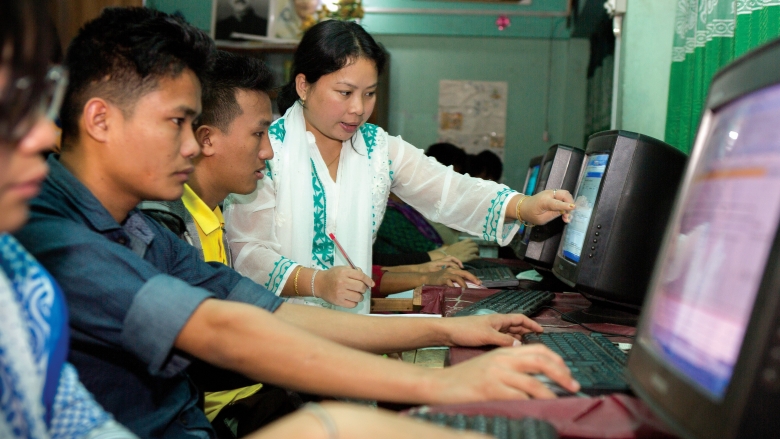 "After I earned my diploma in computer technology from the Bangladesh Sweden Polytechnic Institute in 2008, I started my career as a computer trainer. But I wanted to be independent and help others. So I started my own firm ‘Knowledge Source Computer Learning Center.’ Today my firm gives training to people from all across the country- I am proud of my students! "
— Bijaya Chakma, a beneficiary of the Skills and Training Enhancement Project (STEP), which provides technical and vocational education, and training in Bangladesh.

Bangladesh has made remarkable progress in reducing poverty, supported by sustained economic growth. Based on the international poverty line of $1.90 per person per day, poverty declined from 44.2 percent in 1991 to 13.8 percent in 2016/17. In parallel, life expectancy, literacy rates and per capita food production have increased significantly. Progress was underpinned by 6 percent plus growth over the decade and reaching to 7.3 percent in 2016/2017, according to official estimates. Rapid growth enabled Bangladesh to reach the lower middle-income country status in 2015. In 2018, Bangladesh met the eligibility criteria for graduation from the United Nation’s Least Developed Countries (LDC) list, and is on track to graduate in 2024. Sustained economic growth has increased the demand for energy and transport, and spurred urbanization. Insufficient planning and investment have resulted in increasingly severe infrastructure bottlenecks. To achieve its growth aspiration of becoming an upper-middle income country by its 50th anniversary in 2021, the country needs to urgently implement structural reforms, expand investments in human capital, increase female labor force participation, and raise productivity through increased global value chain integration. Improving infrastructure as well as the business climate would allow new productive sectors to develop and generate jobs.

Bangladesh is both an inspiration and a challenge for policymakers and practitioners of development. While the income growth, human development and vulnerability reduction efforts to date have been extraordinary, Bangladesh faces daunting challenges with about 22 million people still living below the poverty line. The country is at an important juncture: with the right policies and timely action, it can move up within the middle-income bracket. The World Bank has identified job creation as the country’s top development priority. To do so, Bangladesh will need to remove the barriers to higher growth posed by low access to reliable and affordable power, poor transportation infrastructure, limited availability of serviced land, uncertain and complex business regulation, rapid urbanization and vulnerability to climate change and natural disasters, among others.

The World Bank Group’s Country Partnership Framework (CPF) for 2016-2020 supports Bangladesh to achieve its vision of reaching middle-income status by its 50th  birthday in 2021. During the period, the World Bank Group’s technical and financial assistance focuses on (i) accelerating growth by helping to remove structural bottlenecks and provide financing to increase electricity supply and improve transport connectivity; (ii) foster social inclusion by building on Bangladesh’s impressive gains in human and social development; and (iii) strengthen climate and environmental management with the aim to enhancing Bangladesh’s resilience to natural disasters, improving water and natural resource management and modernizing agriculture. The framework is anchored in the government’s seventh Five Year Plan which covers the same period.

Decades of IDA financing has contributed to the achievement of results across a range of sectors as follows:

IDA is the largest external funder in the education sector covering the primary, secondary, and tertiary levels, as well as technical training and vocational training, and education for the hard to reach children. , including 55 percent of poor girls supported by a range of stipend programs.

The World Bank is providing $1.66 billion to ongoing activities in the energy sector to enhance capacity, generate clean energy, improve transmission and system operation, reduce technical losses, as well as increase access to both grid and renewable electricity.

While the country has aving one of the fastest rates of agriculture productivity growth in the world since 1995 (2.7 percent per year,  second only to China), this self-sufficiency is continuously threatened by a decrease of arable land by at least one percent per year, an increasing population and stagnating yields.

The World Bank, with IDA resources is helping Bangladesh build stronger disaster-coping mechanisms – such as schools that double as cyclone shelters – and these have significantly reduced the impact of recent storms, cyclones, and floods in terms of numbers of deaths and economic losses. The 2014 Climate Change Vulnerability Index ranks Bangladesh as the number one economy at risk to climate change. Bangladesh has been a frontrunner in adaptation and disaster preparedness.

Local government institutions in Bangladesh traditionally had a limited role in delivering services to their citizens due to limited responsibilities coupled with lack of adequate resources. Under the ongoing third project financed by IDA, block grants are being  institutionalized twith the government’s own resources and urban fiscal transfer system is being piloted in 16 municipalities.

Aid coordination in Bangladesh is a crucial function, given the very large number of donors working in the country. The main mechanism for in-country donor coordination is the Local Consultative Group (LCG), composed of 32 bilateral and multilateral donors and the External Relations Division of the Ministry of Finance. The LCG’s goal is to ensure effective and efficient use of external aid in line with the government’s development priorities.

Progress on the ground will ultimately require a collective effort, and the World Bank Group has forged strong partnerships with an active donor community. Harmonized joint funding includes large health and education sector programs, and Multi-Donor Trust Funds (MDTFs). The Strengthening Public Expenditure Management Program MDTF is supporting the implementation of the next phase of the Public Financial Management Strategy 2016-2021.  This includes support to the modernization of core business processes, roll out of the Integrated Budget and Accounting System, and the adoption of the new Budget and Accounts Classification System. In this phase of the MDTF, financing is provided by three development partners Department for International Development (United Kingdom), Global Affairs Canada and European Union). Discussions are under way for several development partners to provide parallel financing to support Ministry of Health and Family Welfare, and Ministry of Primary and Mass Education to improve service delivery and to strengthen fiduciary systems. Under a Single-Donor Trust Fund arrangement, the U.S. Agency for International Development provided support to the health sector through the end of December 2017 and continues to support the National Agricultural Technology Program - Phase II Project (NATP2); International Fund for Agricultural Development also provides joint funding for NATP2.

Engagements from the previous strategy that promote inclusive growth – notably in health, education, and social protection, as well as in revenue mobilization, financial sector support, and the business environment – will continue. The Country Partnership Framework (FY2016-2010) also gives greater prominence to policy reforms and makes policy dialogue an integral building block in the country program with the potential to create jobs, increase competitiveness, and boost shared prosperity.

Building on Bangladesh’s remarkable achievements to date – in reducing income poverty, improving health outcomes and educational attainment, empowering girls and women, and building the beginnings of a labor-intensive export-oriented economy that can support further gains in the near future – the World Bank will continue to work with this dynamic and resilient country, to reduce poverty and bring prosperity to all Bangladeshis, especially the poor.