Championing Adaptation in Mexico: Protecting Communities from the Impacts of Climate Change 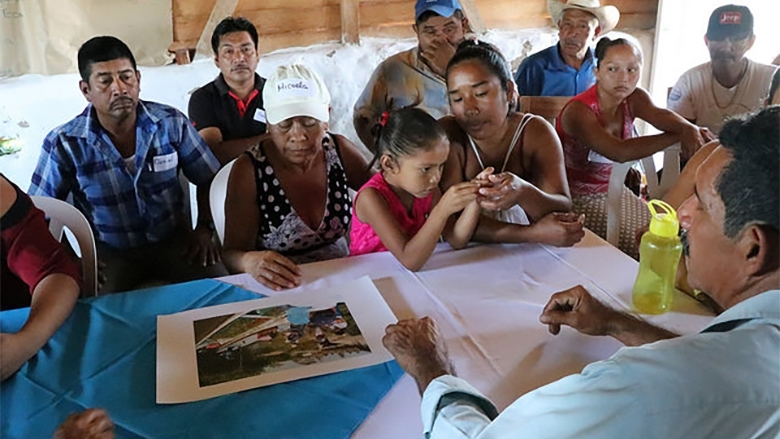 Mexico is particularly vulnerable to the impacts of global climate change, many of which may be irreversible. These impacts include continuous sea-level rise affecting coastal areas and inland basins, an increase in the sea surface temperature in the Gulf of Mexico, intensified hurricanes, changes in the hydrological cycle leading to increasingly heavy rains and strong storms, longer and more frequent droughts, and net decreases in water run-off.

At a regional scale, the ecosystems likely to be most affected by climate change impacts are the coastal wetlands along the Gulf of Mexico. Mexico’s National Communications to the United Nations have identified its Gulf wetlands as an immediate priority for adaptation. Located in the lower reach of the Gulf’s main water tributaries, these wetlands constitute a very productive ecosystem for Mexico. They also provide many environmental services, including hydrological regime regulation; human settlement protection through flood control and buffering storm impacts; erosion control; coastal groundwater conservation and replenishment; pollutant reduction; water quality regulation and protection; and habitats for fish, crustaceans, waterfowl, and wild life, including migratory birds.

The Adaptation to Climate Change Impacts on the Coastal Wetlands in the Gulf of Mexico Project was the first attempt by the World Bank and the Global Environment Facility to support climate change adaptation measures in Mexico. The project had its origins in the country’s strategy for coping with the consequences of climate change and constituted an important element in the government’s adaptation strategy. Because Mexico’s approach to climate change was at a very early stage when the project was prepared, the project design concentrated on developing a set of pilot activities in different areas along the country’s vulnerable Gulf Coast.

Pilot areas in the states of Tamaulipas, Veracruz, Tabasco, and Quintana Roo were selected to conserve and recuperate marine, coastal, and water-dependent ecosystems. (Activities proposed for the pilot site in Tamaulipas were later withdrawn due to ongoing crime and insecurity in the state.) The project focused on actions that would contribute to local populations’ adaptation to floods, lack of clean water, and food insecurity and to mangrove conservation. Project implementation was strongly rooted in the active participation of local stakeholders, with subprojects and complementary activities at all three pilot sites selected with stakeholders’ input and active decision making. Particular emphasis was placed on empowering local women.

Over its five-year implementation period (2011–2016), the project helped promote adaptation to the consequences of climate impacts in the coastal wetlands of the Gulf of Mexico through the implementation of pilot measures in three sites: the states of Veracruz, Tabasco, and Quintana Roo. Key achievements include:

The World Bank, through the Global Environment Facility, provided US$4.2 million toward the cost of the operation. In addition, the government of Japan, through the Bank-administered Policy and Human Resources Development Trust Fund (PHRD), provided $0.51 million in 2007 to support project preparation.

In addition to PHRD funding, the Japanese government provided approximately US$350,000 from its Meteorological Research Institute and about US $190,000 from the Japan Aerospace Exploration Agency to support hydrological monitoring.

Mexico made significant contributions to project financing, amounting to US$17.14 million. Borrower resources of US$350,000 were channeled through PEMEX’s Environmental Protection Strategy for 2008–2009 to develop the baseline for Alvarado’s wetlands, and a US$15 million contribution from Mexico’s National Water Commission (CONAGUA) supported water quality improvements in the pilot sites. These activities concluded in 2008 and 2009, respectively. The National Institute of Ecology (INECC) and the National Water Technology Institute (IMTA) made in-kind contributions of infrastructure and human resources equivalent to US$1.25 million and US$540,000, respectively.

INECC’s participation as implementing body was of paramount importance. Its head closely followed the development of the project, substantially strengthening the participation of other agencies and the lobbying effort. Other agencies actively involved in the project included the Mexican Institute of Water Technology, the National Commission of Protected Areas, CONAGUA, the National Development Banking Institution (Nacional Financiera, NAFIN), and the Secretariat of Environment and Natural Resources.

INECC, in coordination with international organizations, organized the 2016 International Meeting on Ecosystem-Based Adaptation in Mexico to present the results and lessons from the project to more than 70 representatives from government agencies, academia, NGOs, civil society, and international specialists and agencies (from Germany, Peru, Brazil, Costa Rica, Colombia, the Philippines, South Africa, Thailand, and Cuba) working on adaptation issues.

The project’s main beneficiaries are the local coastal communities of the Gulf region where pilot activities took place: residents in and around the Sian Ka’an Punta Allen Biosphere Reserve in Quintana Roo, the Carmen-Pajonal-Machona wetlands in Tabasco, and the Papaloapan river shed wetlands in Veracruz. Beneficiaries actively participated in selecting the adaptation measures to be implemented at each site, and they benefited from the resulting added protection against the increasingly negative impacts of climate change–related extreme weather events.

Institutionally, the main project beneficiaries were INECC and IMTA, together with National Commission of Protected Natural Areas (Comisión Nacional de Áreas Naturales Protegidas) and the municipalities in which the pilot sites were located. These agencies and municipalities benefited through equipment, financing, and enhanced technical and operational capacity to identify and implement adaptation measures.

This was Mexico’s first consolidated, integrated effort to address climate change adaptation issues and measures, and all institutions involved learned and evolved in their overall approach to addressing these key challenges. While no concrete follow-on activities had been defined at project close, discussions among the Bank, Mexico’s Ministry of Finance, INECC, IMTA, and NAFIN are ongoing, with a view toward providing continuity for the pilots already developed and scaling up the lessons garnered from this project.