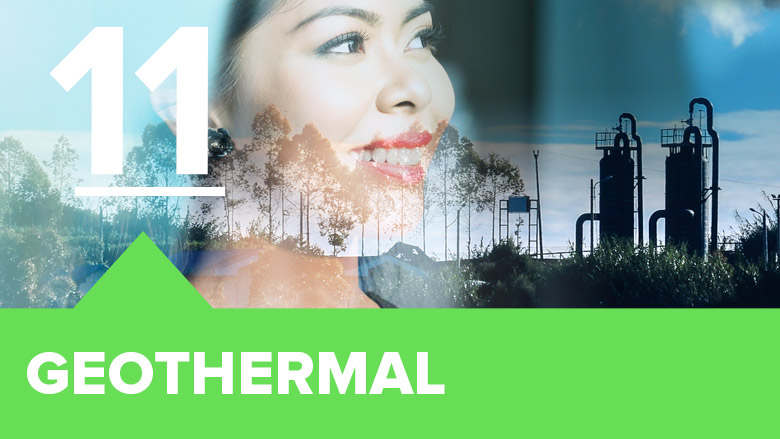 Tapping into pockets of hot water or steam below the Earth’s crust is increasingly being used as an affordable and sustainable alternative to fossil fuels. Geothermal energy is one of the few renewable sources of energy able to produce steady power on a 24-hour basis. Under the right conditions, it can be cost-competitive with coal or natural gas, which means countries can depend less on imported fuels and increase their energy security. Being a cleaner source of electricity, geothermal energy can also play a major role in decarbonizing the power sector.

Despite this potential, high upfront costs for the initial exploration stage and the risk of unsuccessful exploration continue to be barriers for making use of this natural resource on a large scale. Global experience shows that risk mitigation, especially during the initial exploratory phase, can effectively unlock investment. A global scale-up of geothermal energy will require major mobilization of private sector investments facilitated by risk mitigation mechanisms that include using concessional funding from public resources, climate finance and guarantees.

The International Finance Corporation (IFC), a member of the World Bank Group, is also providing financial and advisory services to support the exploration and development of private sector geothermal power projects in emerging markets. For example, in 2010, IFC arranged a $190 million financing package to support construction of Nicaragua’s largest greenfield geothermal power project. Once completed, the 72 megawatt San Jacinto project will provide nearly 20 percent of Nicaragua’s power needs. And in 2013, IFC signed an agreement with international reinsurer Munich Re to develop and pilot geothermal exploration risk insurance products in Turkey. The four pilot projects are funded by $420 million of private investment and are expected to add 140 megawatts of geothermal capacity.

Indonesia has the world’s largest geothermal potential. The World Bank’s support to the development of geothermal power in Indonesia is a key component of the World Bank Group’s Country Partnership Framework for Indonesia, which focuses on government priorities that have potentially transformational impact.

At present, Indonesia is highly dependent on fossil fuels such as coal, its primary source of electricity production. Shifting to geothermal energy will help Indonesia reduce greenhouse gas emissions considerably, and support the national climate mitigation goals set out in its Nationally Determined Contribution (NDC) to the Paris Agreement.   To meet its increasing energy demand in an environmentally responsible way, the government has embarked on an ambitious plan to develop its geothermal resources.

To achieve its target of adding 5.8 gigawatts (GW) of electricity production with geothermal resources by 2026, Indonesia will need an estimated $25 billion of investments over the next eight years, a major portion of which is expected to come from the private sector.

With support from the World Bank and other partners, the government of Indonesia is planning a new Geothermal Risk Mitigation Facility. This would leverage several billion dollars in private sector funding, unlocking investments through risk mitigation for exploration and early production drilling. This would allow investors to prove sufficient resources to attract commercial finance for large-scale development. Over the next seven years it is expected that the facility will lead to the development of more than 1 GW of new geothermal capacity.

This new facility builds on a long engagement around geothermal energy in Indonesia. In 2012 the World Bank supported the government through a grant from the Global Environment Facility (GEF) to undertake key reforms to enhance the investment climate for geothermal development. It also helped Pertamina Geothermal Energy (PGE) to kick-start its ambitious geothermal expansion program through a $175 million IBRD loan, along with concessional financing of $125 million from the Clean Technology Fund (CTF).

More recently, in 2017, the World Bank provided $55.25 million in grants to support the Geothermal Energy Upstream Development Project in Indonesia, which aims to facilitate investment in geothermal power generation in the country. The Clean Technology Fund (CTF) is contributing $49 million to support infrastructure development and exploration drilling. The Global Environment Facility (GEF) contributes an additional $6.25 million to support technical assistance aimed at building capacity in geothermal exploration, including safeguards due diligence. The Ministry of Finance and PT. Sarana Multi Infrastruktur, a state-owned infrastructure financing company, will match the CTF funding for the Project.