Skip to Main Navigation
This page in:_
Results Briefs November 1, 2017

Switching on Remote Communities through Electricity Access in Mexico 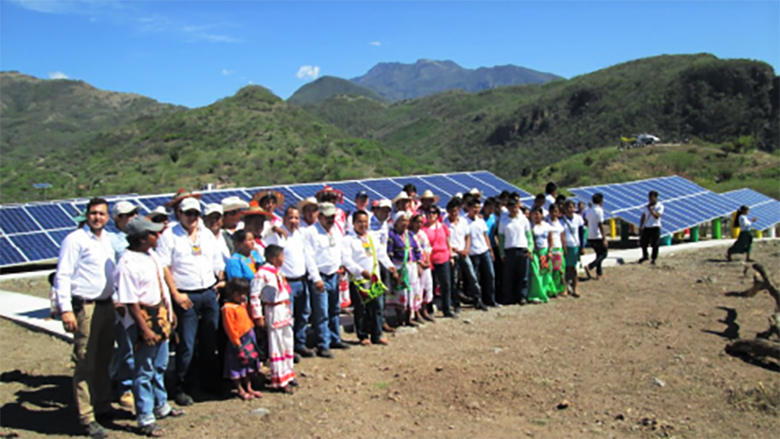 In the first decade of the twenty-first century, electrification in Mexico had reached 96.6 percent coverage. Providing electricity to the estimated 3.5 million people remaining without access, approximately 60 percent of whom are indigenous, proved particularly challenging, however. This was in large part because most of these individuals lived in small communities in remote, isolated locations. Compounding challenges, including lack of other basic services and infrastructure such as roads, water access, telecommunications, schools, and health services, were also prevalent in these communities. The government recognized that, due to population growth, the number of people without electricity would increase by 20 percent over the following decade, making access to electricity an even more pressing issue.

PSIE was designed to support the rural electrification strategies and actions established by the Secretariat of Energy (SENER) and prioritized by the federal administration. In supporting this initiative, the World Bank leveraged its extensive experience in rural electrification and renewable energy to promote relevant international best practices, thereby further supporting poverty reduction efforts in Mexico.

A subsequent restructuring of the project to address initial delays in implementation revised the project scope to focus on one photovoltaic technology: mini-grids based on centralized solar farms (CSFs). CSFs provide a sound, reliable, utility-like electricity supply with much larger capacity per connection than home-system solar units; this ability to deliver greater electricity benefits per household renders CSFs particularly suited to supplying power to small, isolated communities. Because CSFs are considered a renewable energy source, any negative impact and CO2 emissions from the installation are projected to be lower than would result from traditional energy sources.

The Mexico Integrated Energy Services Project supported the government’s long-standing goals to extend electricity to all parts of the country. Through the strategies and actions initiated and supervised by SENER, and with Bank support, rural electrification and renewable energy were widely extended using international best practices and environmental sensitivity, thereby further reducing poverty and extending opportunity in previously struggling communities.

PSIE successfully installed CSFs and related infrastructure to supply electricity to the targeted remote communities, including these specific results:

In addition, access to efficient and sustainable energy services is expected to lead to a better quality of life for the benefited residents. Thus far, important social and economic benefits achieved have included:

Internet access is expected to provide the greatest impact, however, with major benefits including:

By the project’s closing, one beneficiary community, Potrero de la Palmita, Nayarit, had presented a plan to install a water treatment facility. This installation is expected both to foster sustainable use of resources and to create employment opportunities.

The institutional framework for implementing the Mexico Integrated Energy Services Project was led by SENER, with direct responsibility for project oversight, and Comisión Federal de Electricidad (CFE), as the government agency responsible for procuring the 40 CSFs and complying with social and environmental safeguards. A dedicated Project Implementing Unit within a key SENER directorate provided monitoring, financial management, and reporting for the project.

The project’s focus on off-grid solutions complemented both the rural electrification strategy of the Basic Infrastructure Program for Indigenous People Development[SB1]  led by Mexico’s Indigenous People Development Commission, as well as the objectives and scope of the Micro Regions Program, implemented by the Secretariat of Social Development with the goal of improving social and economic development in the municipalities with the highest degree of poverty.

The project was designed to provide electricity to households, businesses, and public facilities in rural areas with predominantly indigenous populations. By project closing, 2,235 households in eight Mexican states had benefited from this operation. Individuals affected by the project were very appreciative. A resident of Nuevo San Diego de Tezains Ejido offered the following comments:

“What has been the most important change? The refrigerator because before, the food spoiled. Imagine that they had to make food just for the day, and the times that there were leftovers, they spoiled.”

The Mexican government has expressed an interest in pursuing a second operation that would build on lessons learned and take advantage of the strengthened institutional capacity created under this project. In many ways, the project represented a pilot exercise for both the government and CFE in their attempts to achieve 100 percent electrification across the country, and it made evident the significant challenges in reaching the last approximately 2 percent of the population still without electricity access. The proposed subsequent intervention could serve as a piloting exercise for the Fondo de Servicio Universal Eléctrico, a fund established by SENER in late 2016 and dedicated specifically to reaching 100 percent electrification coverage in the next five years through energy reforms.

Learning from the implementation of this project could have enormous replicability effects in other Latin American countries, many of which face similar challenges in reaching their last-mile communities and achieving 100 percent energy access.