Contributing to Post-Storm Recovery in the Dominican Republic 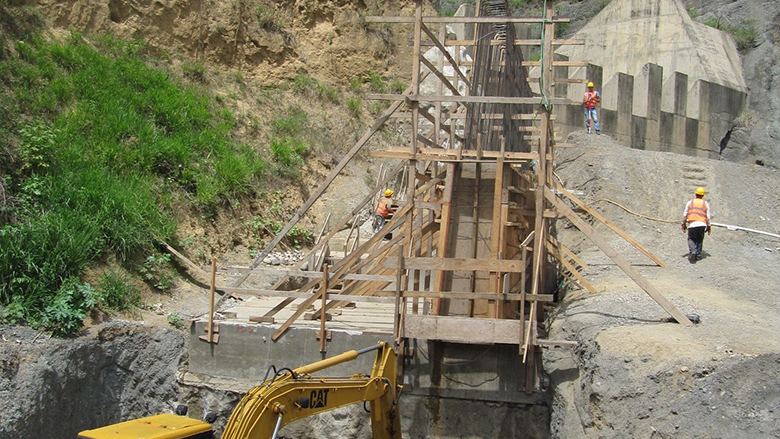 Twenty-four irrigation systems in the Dominican Republic that were severely affected by the 2007 Tropical Storms Noel and Olga have been rehabilitated, restoring irrigation and drainage services to 37,218 hectares and benefiting 18,779 family farmers countrywide. In addition, the original generation capacity (52 MW) of the Aguacate power plant was restored, and an upgrade of an additional 8 MW has benefited over 590,000 inhabitants.

On October 28, 2007, Tropical Storm Noel struck the Dominican Republic with major rainfall nationwide. Around six million people—70 percent of the population—were directly or indirectly affected. More than 160 people were killed, and 130,000 were displaced. Only five weeks later, the country was hit by Tropical Storm Olga, which displaced another 62,000 people, killing 33 and causing further destruction. Productive infrastructure was severely damaged by these events, with especially widespread destruction of infrastructure related to water (irrigation, water supply, and sanitation), transportation, and energy. Key sectors of civil and economic function were affected, including agriculture, health, and many other sectors relying on power distribution.

The Emergency Recovery and Disaster Management Project was designed as a hybrid operation, focusing both on emergency response to immediate needs and on capacity building to strengthen disaster risk management in implementing agencies. At the request of the government of the Dominican Republic, the World Bank and the Inter-American Development Bank, along with other donors including the United Nations, worked to ensure that all priority infrastructure needs were met in the four most affected sectors: irrigation, transport, electricity, and water supply and sanitation. The Bank’s main focus was on the three areas in which it had the longest institutional relationship on the ground (irrigation, electricity, and water supply/sanitation), building, inter alia, on the experience gained from the Bank-supported Hurricane George Recovery Project that closed in December 2003.

Over its span, from 2008 to 2016, the project achieved both of its goals: response to emergency needs on the ground and capacity building for resilience and preparedness to meet needs raised by future disasters. Primary results of the program included:

From 2008 to 2016, the project achieved both of its goals: response to emergency needs on the ground and capacity building for resilience and preparedness to meet needs raised by future disasters.

The World Bank, through the International Bank for Reconstruction and Development, provided a loan in the initial amount of US$ 80 million in 2008 and an Additional Financing of US$ 20million in 2011 to support the Emergency Recovery and Disaster Management Project in the Dominican Republic. Trust fund financing in the amount of US$ 90,000 from the Water Partnership Program also helped support the strengthened and modernized water resources monitoring and analysis system at Instituto Nacional de Recursos Hidráulicos in Santo Domingo, as well as 2010 improvements to its integration within the national early warning system network for disaster preparedness and response.

The World Bank received outstanding support from the Investment Center of the Food and Agriculture Organization of the United Nations (FAO) from project preparation to closing. During the last year of project implementation, collaboration grew with the local representation of FAO and the Inter-American Institute for Cooperation on Agriculture in the Dominican Republic. This collaboration has served as the foundation for policy dialogue with the government on the sustainable use of natural resources (water, landscape, and soil) and led to the formation of this Bank-financed operation. The project has since drawn the attention of several international financing institutions with interests in cofinancing, including the European Union, the French Agency for Development, the Spanish Agency for Cooperation and Development, and the European Bank of Investment.

Manuel Escalante, manager of the Nizao-Valdesia Water Users Association, highlighted the project’s contribution to the restoration of irrigation and drainage services. “With the canal repaired, farmers were able to resume their irrigated production to produce food for the family and sell the cash crops. Without irrigation, the farmers, and especially the poorest family farmers, cannot produce due to the reduction of rainfall in the region.”

In 2016, the government of the Dominican Republic requested support for a new US$ 80 million project focused on resilient agricultural landscapes and improvement of natural resources management. The new operation will be designed to respond to specific issues identified under this emergency response loan, such as protecting watersheds against soil erosion to limit sedimentation of dam reservoirs and pollution of stored water. The Bank is also preparing a Disaster Risk Management Development Policy Loan with a Catastrophe Risks Deferred Drawdown Option that will support capacity for disaster risk management, including in the water sector, and will offer many potential synergies with the future project.