Burkina Faso: Developing infrastructure and an enabling environment for sustained access to water and sanitation services for the urban poor 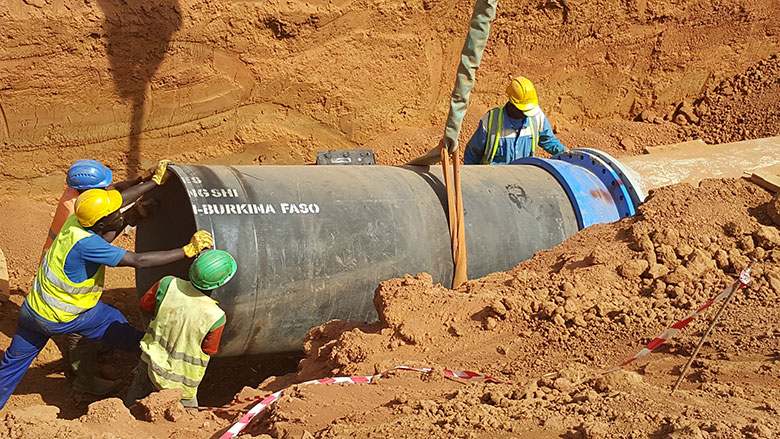 For more than 15 years, the World Bank has supported the Government of Burkina Faso’s efforts to increase access to sustained water and sanitation services in both urban and rural areas. Three large-scale operations have been financed by the Bank with IDA resources, including the Urban Water Sector Project (UWSP: 2009-2018). Today, more than 1.7 million people have access to improved water and sanitation; the financial equilibrium of ONEA, the national utility, was restored and has been maintained; and an innovative, delegated management approach, piloted with local private operators to serve the poor in peri-urban settlements and rural areas, is being-scaled up.

At present, Burkina Faso has a population of 18.5 million and the country is becoming more rapidly urbanized, putting significant pressure on scarce water resources and limited infrastructure. With an urban growth rate of 5.2 percent a year, 40 percent of the population will be living in urban centers by 2030, in particular in informal settlements.

There is only one permanent river in the country, water resources are limited, and the cost associated in making them available are high. Until 2007, the capital, Ouagadougou, was mainly supplied with water from the heavily polluted Loumbila Dam (20 km north of the city) and supplemented by wells around the city. Water shortages were frequent.

Through the series of Country Assistance Strategies and, lately, the Country Partnership Strategy 2013–2016, the Bank has supported the Government of Burkina Faso (GoBF) Country Poverty Reduction Strategy (2000–2010); the Strategy for Accelerated Growth and Sustainable Development (2011–2015); and the National Economic and Social Development Plan (2016–2020), including the Sustainable Development Goals Investment Plans (2016–2030).

Over the last two decades, the Bank has been Burkina Faso’s leading partner in the development of the water and sanitation sector, both through IDA lending and knowledge support. A sum of US$266 million has been mobilized for Bank operations and technical assistance covering water supply and sanitation projects in urban and rural areas.

Remarkable results have been achieved, thanks to the support provided by the World Bank to the water and sanitation sector in Burkina Faso.

The ongoing Urban Water Sector Project (UWSP: 2009–2018) has already reaped results. As of December 2016, about 610,000 people have gained access to piped water via household connection and standpipes; about 440,000 people have gained access to improved sanitation; and about 120,000 students have benefited from improved school sanitation, contributing to improved child health and school attendance.

The financial equilibrium of the sector is maintained with a net positive cash balance of US$6 million. And the sector’s operational management capacity has dramatically improved and ONEA (Office National de l’Eau et de l’Assainissement), Burkina’s state-owned water and sanitation utility, is today ranked among the top performing water utilities in Sub-Saharan Africa, with a staff productivity of 2.9 staff per 1000 connections and a bill collection ratio of 97.7 percent.

Prior to the UWSP, the implementation of the Ouagadougou Water Supply Project from the Ziga Dam (2001–2017, funded by 12 donors, including IDA) led to the following important combined results:

A pilot project delegated the management of water supply in peri-urban settlements in Ouagadougou and enabled 107,000 people among the city’s urban poor (living in informal settlements) to have sustainable access to improved water services. Thanks to the project, their monthly water expenditure decreased from US$4 to US$2.8 (at standpipes) and to $3.5 for household connections.

Under the Community-Based Rural Development project (CBRD, 2001–2013) about 1.4 million people in rural area gained access to clean water that improves the health of rural population and reduces time spent (especially by women) in collecting water.

As of December 2016, the total financing of the Bank’s operations and technical assistance in the urban and urban Water and Sanitation Sector (WSS), in both IDA and Trust Funds, is about US$266 million, under the Ouagadougou Water Supply Project/Ziga (US$70 million); the UWSP (US$160 million); the CBRD (US$35 million); and the Technical Assistance program for sector reforms supported by the Water and Sanitation Program (WSP) is US$1 million.

Furthermore, the Bank has supported sector development through the WSP for more than a decade. It has successfully supported the GoBF’s development and implementation of the WSS Millennium Development Goals Strategy and Action Plan in close collaboration with the lead sector agencies, development partners and other stakeholders.

Helping the GoBF mitigate the deficiency in water assets management, through sector dialogue the Bank  has: (i) facilitated useful learning visits to relevant countries; (ii) influence the GoBF and stakeholders to mainstream poor and vulnerable groups in the sector policy and strategy papers, as well as in the SDG Investments Programs (2016-2030); (iii) initiated a pro-poor water tariff study in rural areas supported by a sector Public Private Partnership strategy validated by national stakeholders in 2015; and, (iv) assisted ONEA to implement a pilot project in five peri-urban settlements of Ouagadougou, in which small scale private entrepreneurs manage water systems under delegated contracts (in partnership with the French Development Agency).

The success of the Burkina Faso urban water sector reform stems largely from a combination of sustained commitment from the central government, appropriate governance framework, competent public management at ONEA, innovative recourse to the private sector, and strong financial support from donors.

The Bank will support to the GoBF to find solutions to the challenges remaining and consolidate its position as the key partner in the development of the WSS sector.

Despite the efforts made by the Government of Burkina Faso over the last 15 years, access by the poor to improved water and sanitation services is still a challenge, particularly in peri-urban settlements and rural areas.

Decentralization transferred responsibility for water and sanitation to rural municipalities in 2009. ONEA has remained the main service provider in urban areas, comprising 54 municipalities (including Ouagadougou). The process of decentralization process was at the time incomplete though, and central and local governments needed to improve their service delivery capacity before taking on the responsibility of providing public services like water and sanitation. Up to today, many the responsibilities delegated to municipalities are being borne by national agencies.

The aim of the national plan, or Country Poverty Reduction Strategy, initiated by the GoBF in 2000 was to reduce inequality by prioritizing equity. However, it has emerged that geographical inequality (due to poor hydrogeological conditions and/or low investment) goes hand in hand with economic inequality to the detriment of the poorest segments of the population. For water supply, the specific objective is to achieve universal access to it by 2030 by affirming a pro-poor and pro-vulnerable approach. The successful implementation of this approach requires strong commitment on the part of the key stakeholders, and a major amount of innovation in pro-poor and pro-vulnerable WSS financing mechanisms, technological options, and approaches, as well as new information, education and information tools.

The World Bank has recently completed the Systematic Country Diagnostic for Burkina Faso, which will serve as a basis for the development of the upcoming Country Partnership Framework (2017–2020). The Bank is committed to continue supporting the GoBF by strengthening sector reform, developing the capacity of urban and rural authorities for service delivery; contributing toward addressing the urban–rural divide, especially with regards to sanitation; and boosting the capacity for integrated water resource management.

Rasmané Compaoré has lived in the same, mud-brick house for 40 years in a peri-urban informal settlement in Ouagadougou, Burkina Faso’s dry and busy capital. But his dusty courtyard has changed forever. In a corner, near the kitchen, a shiny brass tap tops an aluminum pipe. For the first day in his life, at the age of 82, Compaoré lives in a house with piped water.

He is one of 50,000 customers who have taken the plunge and signed up with ONEA for a household water connection. Outside Compaoré’s low wall, a team contracted by the water company are working under the blazing midday sun to cover over a trench connecting him to Ouagadougou’s mains water supply. This forms part of an ambitious national project, in which the World Bank took the lead in financing, to increase access to reliable drinking water in Ouagadougou through an expansion of the distribution network, and to improve the management of the urban water sector.

In the past, Compaoré paid 200 CFA (US$ 0.4) every day for a battered 200-liter drum that one of his four children would wheel 1km to the nearest communal waterpoint. It was an unrewarding chore for a basic necessity.

“My children would wait all day for water and not get anything and often there would be hundreds of people waiting,” he says. “In the hotter months, you could not get water. They would come back and then go out again the next morning.”